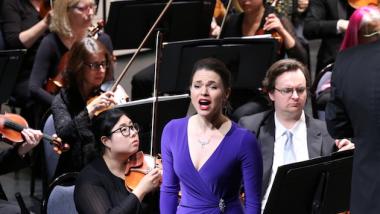 Since music is intangible or abstract, it can grapple with the idea of utopia — a perfect place that does not physically exist. Sometimes, the music of Gustav Mahler blends utopia with nostalgia: Mahler looked forward partly by alluding to a perfect past that never existed.

On Sunday afternoon at the Lesher Center for the Arts in Walnut Creek, the California Symphony opened their 31st season with “Lyrical Dreams.” The program concluded with Mahler’s Fourth Symphony, though it also included two other works. All told, “Lyrical Dreams” mixed the concepts of Americana and utopia. While the synthesis sometimes confounded, soprano Maria Valdes was consistently enrapturing.

In a move that seemed either cryptically political or wholly oblivious to current events, the evening began with an unexpected performance of “The Star-Spangled Banner.” Music Director Donato Cabrera conducted the anthem facing the audience, thereby encouraging a sing-along. From my vantage point, most people rose, nobody kneeled, and some folks appeared to be confused. From my same vantage point, no African-American professional athletes were in view, and the audience overwhelmingly consisted of white-haired white people.

Especially in light of the anthem, a footer in the program notes, “Making concerts fun again,” similarly came across as either an unwitting or a strange political allusion. Unambiguously and admirably, though, California Symphony is endeavoring to attract new listeners. For example, male orchestra members wore suits in lieu of fussy tuxedos, and the program notes specified that covered beverages, use of silenced mobile devices, and clapping whenever desired were all welcome.

The programmed evening began with a work for soprano and orchestra by a beloved American composer, Samuel Barber. Knoxville: Summer of 1915 sets text by James Agee, which reminisce about innocent, bygone summers in Tennessee. The luxuriant orchestra at times covered Valdes. At others, though, her voice gently and effortlessly soared above the large ensemble like a warm summer’s breeze.

Nathaniel Stookey’s YTTE (Yield to Total Elation, 2016) uses a new musical instrument that also has an uncommon four-letter name. The electro-acoustic “oove” is a creation of Olivier DiCicco, a Bay-Area-based engineer and kinetic sculptor. Another San Francisco artist also inspired the composition: Achilles Gildo Rizzoli, who “dreamed of a vast utopia” and created sketches of an imaginary metropolis to host a euphoric, fantastical world exposition.

The oove, which Stookey himself played on Sunday, uses electromagnetism to create an ambient harmonic background over which this expansive orchestral piece unfurls. It is not a purely timbral or textural work, but neither is its structure defined by clear melodies. Long, sustained harmonies form a sonic primordial soup in which melodic motifs slowly brew. Sometimes sounding like the choppy whirring of a distant helicopter, the oove amplified the work’s proportions still more.

The climax or musical representation of elation happened near the end of the work, with brass players briefly performing standing up like cherubic trumpeters. An impressive clarinet solo in the stratosphere began to wind things down, only for them to build up again once more before the piece concluded.

After intermission, Valdes joined the orchestra for the finale of Mahler’s Symphony No. 4, which was intended to depict a child’s view of heaven by setting the lied “Das himmlische Leben” (The heavenly life).

As he did throughout the performance, Cabrera conducted without a baton and with exuberance to lead this skillful performance, which was the first time the California Symphony had played Mahler in more than two decades. Valdes’s movement even topped the beautiful third movement in sheer gorgeousness. As the graceful confidence in her voice suggested, Valdes had performed this work with Cabrera (and a different orchestra) before. It was certainly a finale worth waiting for.

Perhaps, like listening to these three pieces, the idea of making anything fun or great again can feel both nostalgic and utopian. While this program’s start might have been more sensitive to current events, the California Symphony is – surely and successfully — bringing ever-bigger audiences together in this, our real (albeit imperfect) present day. Meanwhile, Valdes seems on her way to the otherworldly realm of stardom.

The orchestra’s season opener features a Kevin Puts piece he created with their support when he was an up-and-coming composer.

The California Symphony has reanimated itself and is looking forward to its opening next Sunday.