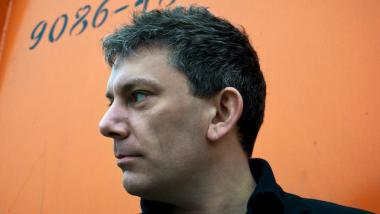 To enjoy pianist Marino Formenti’s program last night at Colburn Conservatory’s Zipper Hall, you would have to be OK with a certain amount of artistic indulgence and historical inaccuracy — something that is not commonly, or outrightly, accepted in classical-music culture. He used music that he chose to play in his essay-like program as his own pigments to paint with; the older music, in particular, received a heavy makeover for the sake of the story he was trying to tell. It is mostly him, his sensibility you hear over the musicality of the composers he plays. I am not used to seeing a concert in which the performer acts more as a creator and less as a steward. It was exciting, and healthy for the classical and contemporary scene alike.

Formenti, a longtime friend of the series Monday Evening Concerts, has been developing this kind of collage-recital for some years now. By juxtaposing different eras and genres of music, he arranges a conversation between distant points of time and culture. Each piece rolls — often without pause — into the next, and the listener has to contend with radical changes in style, or on the other hand, radical similarities between music that seems disparate.

The first half of the concert consisted of a rich alternation between keyboard music that immediately predates Bach (1685–1750) with more recent works by Salvatore Sciarrino, Wolfgang Rihm, and John Cage. This genre of early keyboard music, played on either the dry harpsichord or virginal, is known for its endless trills and extra-frilly lines. Hearing them on the modern piano at a luxurious mezzo-forte, was a little like hearing a tame lute piece shredded out of an electric guitar with overdrive. This description sounds absurd and maybe tasteless, but the product was beautifully overgrown. Only someone with the 1500 thread-count smoothness of Formenti’s tone could pull it off.

But I wouldn’t say it was tasteful. The whole first half seemed on the edge and over the edge of taste. The works by Sciarrino, at first echoing the delicacy of the ornaments of older works by Girolamo Frescobaldi (1583–1643) and Johann Jakob Froberger (1616–1667), soon expanded into a toddler-party of banging on the top and bottom end of the piano. Mirroring the excess of contrapuntal beauty and decorativeness of the older works, Formenti highlighted the brutal excesses of the Sciarrino and Rihm pieces. Rihm’s Klavierstück No.7, characterized by my friend as “riding a horse of the Apocalypse,” was answered by the equally extreme, saccharine performance of a Prélude non mesuré by Louis Couperin. Formenti stretched the harmonies into infinity, a smoky fabric onto which he then dramatically dropped the final minor chord like a bag of groceries. It was too much, but what can you expect from a concert titled “Ma Mort” (My death)?

The most rewarding juxtaposition of the evening, a combination that I would never have had the privilege to hear if it weren’t for Formenti’s programming, was pairing Bach’s Bourrée from the English Suite in A Minor with György Kurtág’s “In Memoriam Mihaly Andras” from Játékok. Leading up to this moment, various Bach works were interlaced with other movements from Játékok, some of which were so short they came out like weird sneezes between the Bach. Formenti’s performance of the Bourrée felt like the shining of refracted colors through a suncatcher, spinning faster and faster with unrelenting strength. Whether a result of Formenti’s incredible knowledge of modern piano repertoire or by stroke of genius, following the unbridled dance with this particular Kurtág work made the evening a rare, wonderful event. “In Memoriam Mihaly Andras” is a slow walk through the most beautiful and various grays, blacks, and browns. It was humbling to have felt moments before that I had heard all the colors in the world from Bach, only to be proved happily wrong.

Elizabeth Roe: The Executor of Risk

Elizabeth Roe and her piano duo partner Greg Anderson are breaking a lot of "rules" and bringing four-hand piano music into the 21st century.