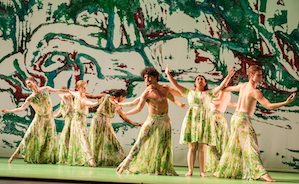 In terms of plot, Acis and Galatea is the simplest opera choreographer Mark Morris has ever presented. The production is an otherwise elaborate affair whose intricacies, for the most part, enchant. Morris’ company is still one of the best on earth; at this point we could say the dancers have retired the title. Their musicality, technique, wit, grace, generosity, and zest are without par. And Morris has beautifully balanced this pastoral’s tenderness, sorrow, and humor (sometimes slapstick — no stretch for our choreographer) to create a memorable confection.

With music from the Philharmonia Baroque Orchestra and Chorale conducted by Nicholas McGegan, Acis and Galatea, a Cal Performances co-production that will tour, notably to Lincoln Center, had its world premiere on April 25 at Zellerbach Hall. Tenor Thomas Cooley (Acis), soprano Sheherezade Panthaki (Galatea), Zach Finkelstein (Damon), and bass-baritone Douglas Williams (Polyphemus) sang onstage (in English with much appreciated supertitles), offering dramaturgic challenges not always solved, but their voices, as well as the music from PBO, were extraordinarily beautiful.

With a libretto written by John Gay in 1739, Acis and Galatea is Handel’s most popular opera (the one most performed during his lifetime), based on Ovid’s Metamorphosis. Mozart rearranged it in 1788, adding bassoon, clarinet, and horn. Morris said the changes make it swing in a way that Handel’s doesn’t.

Our story: Acis loves Galatea. Jealous and boorish Polyphemus slays Acis by hitting him with a boulder. The heartbroken Galatea brings Acis back as an eternal stream, healing spirits all around.

The truth of things, though, is much busier than that. We are swept into a country scene, though designer Adrienne Lobel’s abstract backdrop doesn’t exactly give that away. Dancers in Isaac Mizrahi’s sheer, spring-green, forest-printed long skirts (matching tops for the women, bare chests for the men) fill the stage, zigging and zagging in twos and fours, facing us as they buoyantly sideslip. They’re setting the pace for the next two acts, which rarely slow for more than a few moments.

The dancers pull the non-dancer, soprano Sheherezade Panthaki onto the stage. Her Galatea fills the air with astonishing voice.

Herein lies a problem. There isn’t a polite way to say that she looks out of place; despite her composure, it’s quite difficult to adjust to her physical presence. Which leads to a note about the singers’ costumes; they are of the same print as the dancers’, but they are opaque rather than sheer. This adds mass, and Galatea’s short skirt looks like a fashion mistake as well. The men singers wear silly forest-print suits and ties ... they would disappear into a print sofa.

The dance costumes are graceful and almost classic, but, like all the other costumes, they clash with the dark greens and deep reds of the backdrop in a cacophony of color and pattern. (BTW, modern dance has finally worn me down; I don’t mind men in skirts — not here, anyway.)

Probably someone has written at length about the problem of putting non-dancers onstage with dancers when both are vital to the opera. And certainly there have been reams about casting for looks and size versus ability, and talent, particularly in opera. So let’s just leave it where it is. The best-integrated combination of singer and dancers was bass baritone Williams, a gorgeous, villainous, and piggy Polyphemus, whose moves, which included slapping, goosing, and grabbing, were seamlessly integrated with the dancers, creating a character you love to hate.

Morris is so good at mood-setting in these period operas, where, like shifting spring clouds, joy is followed by foreboding, and the darkening vanishes into light, or all of a sudden we’re in the middle of a pastoral flock of ewes, rams, birds, and whatnot, all moving, via the dancers’ steps and gestures, squarely on the beat, giving birth to charming moments in which we can all partake.

Morris can articulate, with the tiniest of lifts, the paradoxical mixture of sensuality and solemnity. In allegro passages, festivity abounds, reaching its peak with an exuberantly rich, almost levitating jig. In one amazingly buoyant solo, dancer Laurel Lynch's legs crossed into little hitchkicks, her energy never flagging.

Let’s just move along to the happy ending, which requires some sharing of the chorus:

And he appears in a toga, with a wreath on his head. It was lovely to see Acis lose that weird suit — well, at least the top half.

If you missed the show, mayhap you’ll get a chance to gambol through the pastures with MMDG some other time. Morris’ Acis and Galatea definitely has legs.