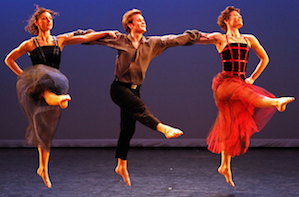 It’s a given that Mark Morris is one of the best dance makers not only now, but ever. But that genius is not always on view, especially when the Mark Morris Dance Group goes touring from its Brooklyn home. Morris has lots of things he wants to show lots of people, and some of the longer pieces in particular are ambitiously overwrought, despite their flashes of brilliance and the company’s consistent artistry. So it was a delight to be on hand for the first performance of the troupe’s current Zellerbach Hall engagement.

There are two programs; this one, and Program B, which includes the Bay Area premiere of Excursions; Crosswalk, a West Coast premiere, and a reprise of last year’s Spring, Spring, Spring, an adventurous but uneven visit to Stravinsky’s Rite of Spring centenary.

You want Program A, which is repeated tomorrow and Sunday afternoon. This show of four West Coast premieres combines the energy of Morris’s early career, when he was making short and shining dances, wading into many streams of inspiration — gleefully kicking and splashing — with the grace, wit, and humanity his work so confidently embodies today.

It divides pretty naturally into two halves. The first is song and dance: Pre-intermission, we have The Muir, which premiered in 2010, a collection of dances to Irish and Scottish folksong arrangements by Beethoven; and A Wooden Tree, playful, even silly pieces set to a wacky collection of songs by the Scottish poet, composer, lyricist, and eccentric Ivor Cutler (1923-2006), a glimpse of what The Muir might have looked like if Beethoven, too, had had no filter.

Life is lovely on The Muir, for six dancers (three men, three women), accompanied by three singers and three musicians from the Philharmonia Chorale. The first dance is a pastorale, with dancers as dancers but also, maybe, as sheep, cute and coy, stealthy yet charming. In the second, “The Sweetest Lad was Jamie,” Michelle Yard, in a gown of dark green, takes lyrical flight, transported into flying arabesques. Rita Donahue, tall and gracious in red, is similarly ecstatic in the next piece, titled “Cease Your Funning,” which of course would be a shame, while two of the men, their arms marking hearts about to burst, are rivals for blue-gowned Laurel Lynch’s affections in Sally in Our Alley.

After the three men (Dallas McMurray, Billy Smith, and Noah Vinson) worry about how they can show their love, they drink, fall into slumber, then leave the now-dark stage to one woman, “The Lovely Lass of Inverness.” That’s Lynch, whose pose and poise eloquently evokes country life’s tranquil side.

And then there’s the not so tranquil Wooden Tree, with capering dancers in plaids and hats and bright colors, just moderately naughty; yet the lyrics’ defiant foolishness, like the eight dancers’ movement, is not without an undercurrent of pain. There are 14 songs, ranging from “Here’s a Health for Simon,” a toast to a kid who’s a pain in the neck, to “Cockadoodledon’t,” which bursts out after the dancers have taken their bows. The song with the most feeling: “I Love You But I Don’t Know What I Mean.” Visually and aurally, A Wooden Tree is like a marathon, leaving exhaustion and exhilaration in its wake.

Jenn and Spencer, a duet for Sam Black and Jenn Weddel (where Spencer is, who knows), is one of the most perceptive renditions of an intimate relationship ever made into dance, and a stunner. Set to Henry Cowell’s Suite for Violin and Piano (1925) and played by Georgy Valtchev and Yegor Shevtsov, its expressions of the rises and falls of couplehood are sensuous, but not erotic. Jenn is in a silky nightgown; Spencer in pants and shirt. So she is more revealed and, it would seem more vulnerable. However, the vicissitudes danced out in the close-partnered embraces, pushes, swings, hits, and lifts, many of which reveal her bare legs, indicate her strength. She gives as good as she gets, and the duet’s final moments are even more breathtaking than those that precede them. Black and Weddel invest every second with complete commitment to detail and nuance.

Festival Dance, set to Johann Nepomuk Hummel’s Piano Trio No. 5 in E Major, shows Morris at his musical, playful best. The Allegro is a waltz, the Andante is a march, and the Rondo is a Polka; the dozen dancers are delightful, with three bearded men, three shaven ones, and six strong, beautifully graceful women. The Allegro is all exaltation. The Andante embodies formalism in its lines of march, until the dancers melt from strict quintets into individual poses. The women look like nymphs in baroque statuary, arms angled just so; the men sweep them up, lifting them overhead.

True to form, the Rondo-polka is blithe and airy, with flexing legs and fan kicks and dancers taking flight into the wings, only to re-emerge in a whirlwind of spins and jumps. They’re having a picnic at Zellerbach, and it’s absolutely delicious.