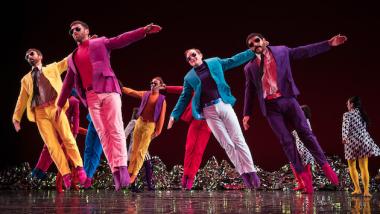 Choreographer Mark Morris says he hates nostalgia. This only makes sense if you think nostalgia is the tacky, icky residue that oozes from great work poorly remembered. So thanks, Mark, for the Mark Morris Dance Group’s Pepperland, a brilliant salute to the Beatles, not to mention life itself, presented by Cal Performances last weekend at Zellerbach Hall. Like the Beatles’ 1967 LP, Sgt. Pepper’s Lonely Hearts Club Band, Pepperland, which premiered last year in Liverpool, is a real trip, which is to say a trip into the past that’s clean and clear and utterly devoid of ick or tack.

Ahem. That reminds me:

It was 51 years ago, in the summer of ’67, that I first heard the new album. I was a quasi-hippie, teaching English to Filipino-American kids whose parents worked the sugar plantations in Hawaii. We were cooling off with beer, alternately sprawling and dancing in the living room of an ancient boarding school resurrected as our dorm. Like Mark Morris (who was 10 or 11 when it came out), I enjoyed Sgt. Pepper and found it full of harmonic earworms that remained with me even after I tired of the album. Now and again, probably thanks to the monster publicity engine that pushed it back into the public consciousness last year, I listen to the whole thing and get swept up in all those icky, tacky Beatles memories, like their first visit to the United States in early 1964, shortly after JFK’s assassination. It was a kindness the Fab Four did, a balm for my generation’s sorrow and rage. We swept gratefully into Beatlemania, self-soothing with silly dances of our own, happy frugs and swims and whatnot — plenty of whatnot — dances Morris in Pepperland evokes just enough, but not overmuch, to sweet, right perfection.

The time, in fact, is beyond right. Given the current state of the nation, an hour-long escape from disasters — real and perhaps yet to come — into Morris’s reimagined Beatle-y world, where there’s “nothing to get hung about,” (from “Strawberry Fields Forever,” the only song in the ballet that didn’t make it onto the album), is unimaginably restorative.

Musically, Pepperland is a continual and wonderful surprise. Morris, who eschews canned music (even, if not especially, by the Beatles) and likes to make dances with the score in his hands, has chosen composer and frequent collaborator Ethan Iverson, a founding former member of the jazz trio The Bad Plus, to arrange seven songs by the Beatles (“Sgt. Pepper’s Lonely Hearts Club Band,” “With a Little Help from My Friends,” “When I’m Sixty-Four,” “Within You Without You,” “Penny Lane,” and “A Day in the Life”) and to add five of his original compositions. It’s all played by a marvelous six-piece orchestra, which includes a theramin, its eerie airborne properties in the hands of Rob Schwimmer. Vocals, resonantly sung from the pit by baritone Clinton Curtis, come forth with inborn gravitas, often in contrast with the onstage jollity, inspiring reflection. At first listen, the Beatles-song harmonies are tantalizingly close to off-key, encouraging deeper listening. It pays off. I especially want to hear “A Day in the Life” again after reading Iverson’s note on the score in the program: “Theramin nocturne, vocal descant, apotheosis.” You gotta love it. One of Iverson’s original songs is titled “Wilbur Scoville.” Writes Iverson, “Wilbur Scoville invented the scale to measure heat in hot sauce: The original Sergeant Pepper?”

During the “Sgt. Pepper” theme that bookends the ballet, like the LP, front and back, we get a look at the company, marching, jumping in unison groups at 45-degree angles, in kicklines with fan kicks and pelvic bumps, and the men marching downstage with straight legs, each dancer augmented by an extra pair stiff of long legs at a diagonal angle (a hidden dancer behind them) creating silly walks.

The next piece, Magna Carta, by Iverson, wittily introduces characters from the album cover, including a white Sonny Liston, striking a pugilistic pose, and a black Albert Einstein, who adds the finishing touch by sticking his tongue way out and waggling his eyebrows as in the famous photo. No special costumes, none required. And by the way, no Beatles band member suits, either. Having warmed up the crowd, the next tune is “With a Little Help from My Friends,” more poignant than jaunty.

The dancers magically turn contemplative (they can do it all and on a dime) once again for “Within You Without You,” George Harrison’s piece that evokes another Harrison, a little; Lou Harrison, one of Morris’s iconic favorites with whom he often collaborated. Here the dancers turn to Indian motives, tablas from the pit and all, with graceful lotus poses and headwraps adding a meditative yogic quality.

There’s gaiety always but undertones of sorrow, evocative of yet another restive era, with Vietnam, more assassinations, riots, the cold war, and political tensions the world around. And yet, Morris is reliably buoyant when times require it, and the dancers — including the awe-inspiring company veteran Lauren Grant — beyond adroit as they lift, pose, leap, nigh-always in the company of friends — the rest of the company, very far beyond getting by. Pepperland is Mark Morris to treasure.

With music from the Philharmonia Baroque Orchestra and Chorale conducted by Nicholas McGegan, Acis and Galatea, a Cal Performances co-production and world premiere is a delight.

It’s a given that Mark Morris is one of the best dance makers not only now, but ever. His genius was on view in his current tour to Berkeley.

The Humane Virtuosity of Mark Morris

Last week marked the first return of the Mark Morris Dance Group to UC Berkeley since Robert Cole’s retirement and Matías Tarnopolsky’s start as director of Cal Performances; Friday at Zellerbach Hall, it was good to see that not much has changed. The choreographer best known for illuminating complex scores and the dancers known for making virtuosity out of unaffected humanity were both doing just that — yet, in unexpected ways, Morris may have raised the bar.