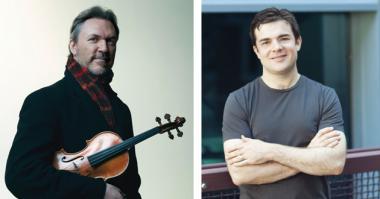 The audience had ample time to judge O'Connor's compositional skills during the program, half of which was taken up by the outer movements of his lengthy "Fiddle Concerto" and the entirety of his much shorter "Strings and Threads." The other half went to another American, Aaron Copland, who also mines folk-music material.

O'Connor's writing ranges from the predictable to the sublime. The latter quality was nowhere more evident than in his concerto's final cadenza, which begins with a plaintive melody that evokes the melancholy of the Appalachians.

Clad in a sharkskin suit, O'Connor first set off the melody with double stops, but then took flight and enveloped the tune with a swirling halo of rapid-fire notes in the upper registers, all played sotto voce (quiet voice). The effect was haunting, even mesmerizing.

The cadenza continued in this vein for quite a while. The passagework got ever trickier, and O'Connor's bow flew ever faster until he suddenly lifted it off the strings and played a two-handed pizzicato with fingers plucking from all directions. Just as abruptly, he disdained the strings and played his instrument as if it were a drum, tapping his fingers everywhere but the fingerboard.

Taken by itself, the cadenza was a musical delight. But it was just one component of the concerto; a substantial work that features a full orchestra — in this case led by guest conductor Michael Christie — and plenty of back and forth with the soloist. Here, O'Connor's skills were less evident. The concerto is essentially a pastiche, with a string of less-than-memorable tunes strung together by O'Connor's instrumental virtuosity, much like Paganini used to do.

O'Connor often tries to develop themes by starting them at the bottom of the scale, then repeating them up a step, then another step, and so forth until reaching an artificial climax at the top. Another favored device is for the soloist to repeat orchestral material with substantial embellishments, playing a bevy of notes when one or two might suffice. This device, which one might call “poly-notalism,” dazzles at first but gets tiresome when every line is filled with hemidemisemiquavers.

On balance, O'Connor's virtuosity and infectious enthusiasm more than compensated for the concerto's structural deficiencies. That was even more the case in "Strings and Threads," an unabashed suite of folk-like tunes written by O'Connor and played by him and his wife Maggie O'Connor, with the orchestra acting as little more than a basso continuo.

Mrs. O'Connor, wearing a gossamer orange gown, proved to be her husband's match in terms of finger and bow speed, but her sound was more subdued, perhaps because of her violin.

The two took turns playing the beguiling melodies, which more or less trace the history of American folk music, from an ancient-sounding "Fair Dancer Reel" to a swing-based "Sweet Suzanne." The playing throughout was dazzling and rapid, with occasional ritards during the bluesier numbers.

Copland, like O'Connor, often bases his music on folk material, but his approach is entirely different. Instead of taking the tunes at face value, he strips them to the core and then reassembles the material in his own distinctive voice. The tunes are still in there somewhere, but the composition — be it Billy the Kid or El Salón México — is pure Copland.

Michael Christie, the guest conductor, opened the concert with a competent but somewhat lackluster reading of Billy the Kid, a seven-movement suite drawn from the ballet of the same name. Christie is an unobtrusive leader, with feet solidly planted and arms giving a compact and consistent beat. His technique was helpful for Copland's tricky rhythms and copious syncopation, but it failed to deliver a compelling arc for the entire work.

Orchestra and conductor fared much better in El Salón México, which closed the concert. Here Christie began with an invigorating tempo while maintaining a clean sound. The many brass and woodwind solos emerged from that texture with startling clarity. Even better, the precise beats and carefully observed syncopations created palpable tension as Christie kept driving the orchestra forward.

In El Salón México, the rests are as important as the notes. Instead of creating a fluid line, Copland offers only glimpses, engaging the audience to fill in the gaps. Nothing lands where you think it will, even in the long crescendo to the end. These last few moments gave rise to the best playing of the afternoon. Surely the tensions had to resolve, and they finally did with a triumphant final chord.