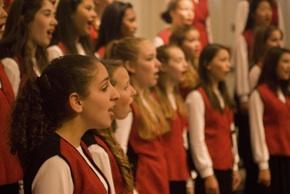 A Marvel to Behold

Heuwell Tircuit on October 26, 2009
Apparently, no one has informed the San Francisco Girls Chorus that what they are doing is impossible, so they just do it — and very well, too. On Friday night their “Transcendent Voices” performance in Calvary Presbyterian Church — part of the ensemble’s 30th anniversary season — was a jaw dropper that made the heart soar in delight.Director Susan McMane put together a difficult string of music by seven international composers, several of whom are hardly known. Her program opened with Hildegard von Bingen’s O pastor animarum 12th-century hymn, followed by Damijan Močnik’s Blagri (The beatitudes), John Tavener’s Two Hadiths of the Prophet Mohammed (2007), and Schubert’s setting of the 23rd Psalm, Op. 132, D. 706.

Then came the intermission we all needed. The evening continued with Olli Kortekangas’ Three Fiord Sketches (1994), then Abbie Betinis (1980–) was heard in the large Behind the Caravan: Songs of Hâfez, before three traditional spirituals closed the formal program. As an encore the chorus sang I Dream Awhile, ranged out in the audience down the four aisles.

Betinis’ piece was accompanied by violist David Daniel Bowes, with Diego Gonzales on the lutelike oud, plus percussionist Iskandor Rashid using finger-played drums of the Near East. (Look Ma, no sticks!)

Abbess von Bingen was an extraordinary genius: a superior composer of great depth, a linguist, an advisor to the powerful rulers of the era, and a devoutly religious mystic. As to her massive talents, she famously said, “I am but a feather on the breath of God.” Her music is cast in Gregorian modes as single-line chants that are elaborate in their beauty, the most stunning musical creations of her time.

The chorus sang her O pastor animarum (O shepherd of souls) from all around the church’s balconies, preluded and postluded by a hand bell choir. The effect was gorgeous. Even a religious cynic could not help but feel a sense of being transported into poetic awe. Personally, I consider this some of the most beautiful religious music written by anyone, ever.

Slovenian composer Močnik (1967–) set his Blagri as a modal motet, much of it chantlike. I found it pleasant enough, but little more than that. The contemporary composer John Tavener (1944–), not to be confused with the 16th-century John Taverner, has spent most of his career in setting religious subjects. He combines basically tonal music with some genuflections to 20th-century music, such as episodes in bitonality. On this outing he was represented by two short, lovely “sayings” about the beauty of God for four-voiced choir, accompanied by an unobtrusive harp.

The one familiar work of the event was Franz Schubert’s setting of the famous God is my Shepherd, I will not want psalm, translated into German from the Hebrew by no less than Moses Mendelssohn — the composer’s grandfather. The setting dates from 1820 when Schubert was at the zenith of his melodic powers. Few composers have written more music for women’s chorus than he, and this work — like most of Schubert’s — is startling in its ability to be so expressive using deceptively simple means. The performance was exceptional, even for the S.F. Girls Chorus.

A Work of Influence

Then we came to Holst’s seminal setting of four poems from the original Sanskrit. Holst was much interested in Indian culture, and went so far as to learn that ancient language. Indeed, he personally translated these texts into English before composing the music. They do not, however, sound much like Hindu music, but rather lean toward English folk traditions. On first encounter, I was struck by how influential they became to following generations. Britten’s Ceremony of Carols, to name one, clearly owes much to Holst’s Rig-Veda pieces, not to mention some of Vaughan Williams’ vocal works.

Finnish composer Kortekangas took his three texts from the Chinese I Ching, the so-called Book of Changes. What the I Ching has to do with Scandinavian fiords escapes me. Those sketches are, however, quite serene in their conservative modal setting, interrupted only here and there by modern noise gimmicks — speaking rather than singing some of the English texts, and such.

Betinis received her master’s degree from St. Olaf College, in music and linguistics. Her five Hâfez settings are drawn from an ancient Persian Sufi poet and use their original language. Of course, this chorus sings everything from memory, so the words had to be learned by rote. But to what purpose? There’s an old Russian saying: “Better a bad original than a good imitation.” When added to the affectation of Betinis’ sonic mock-Arabic score, the work came off as merely irritating.

In all, the Girls Chorus performances lacked nothing in exact precision of intonation, balances, unions, and beauty of sound. When combined with their singing everything from memory, and in assorted languages, the result defied logic, as well as expectations. They’re a marvel to behold.