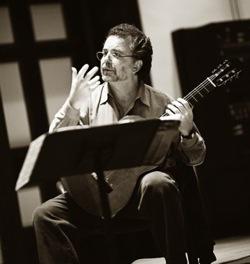 Manuel Barrueco gave a panoramic view of the history and future of the classical guitar in the 20th and 21st centuries in a marvelous recital Thursday at San Francisco’s Herbst Theatre. Historical perspective came in the first half of the concert, presented by San Francisco Performances and the Omni Foundation for the Performing Arts, and dedicated to a commemoration of the 100th anniversary of the deaths of Isaac Albéniz and Francisco Tárrega. The present and future got their due in a collaboration with Barrueco’s current protégés, Meng Su and Yameng Wang (performing as the Beijing Guitar Duo) and in the premiere of a trio written by Sergio Assad.

Albéniz’ piano music, inspired by flamenco and indigenous Spanish traditions, is well suited to performance on the guitar and has been very important in the 20th-century revival of interest in the instrument. The legendary Tárrega made transcriptions of Albéniz’ piano music, and an appealing (though undocumented) tale says that Albéniz, on hearing Tárrega’s performance of his transcriptions, declared the music had found its rightful home. Thursday, Barrueco played the Prelude From España, Granada, and Rumores de la caleta, and he vividly captured the music’s roots in flamenco guitar with his rhythmically insistent arpeggios, strummed chords, slurs, and rapid scales. In slower passages, the artist’s use of rubato brought to mind a Gypsy singer improvising an emotionally intense melody.

Tárrega laid the cornerstone of the 20th-century guitar revival with his technical innovations and many compositions. His Pavana, Minueto, Gavotte, and Mazurca are all intimate stylized dances that delight in the idiomatic physicality of guitar playing and that Barrueco approached with an elegant insouciance. Tárrega’s Danza mora and Capricho árabe are more substantial concert works that reflect the strong Arabian element in Spanish culture. Barrueco clearly brought out the insistent African rhythmic pattern of Danza mora while skillfully spinning out an elaborate melody. Capricho árabe, by contrast, is a tender Spanish serenade that Barrueco brought to life with a warm, expressively varied tone and a sentimental rubato.

Barrueco is also well known as an important teacher. Accordingly, he used the second half of his recital to introduce two of his current students. Meng Su and Yameng Wang both completed their early studies in their native China, have won their share of international awards, and are simultaneously completing their studies with Barrueco and launching their concert career. On Thursday, as the Beijing Duo, they performed Radamés Gnattali’s Suite retratos, a four-movement work based on the music of popular Brazilian composers: Pixinguinha, Ernesto Nazareth, Anacleto de Medeiros, and Chiquinha Gonzaga. Alternately lively and languid, the suite presents interpretive and ensemble challenges that the Beijing Duo handled with a confidence and flair that made me eager to hear their full concert for the Omni Foundation next year.

Suave Mixture From the Barrio

The evening’s highlight was the world premiere of Sergio Assad’s The Enchanted Island, performed by Barrueco with Meng Su and Yameng Wang. The title refers to one of the oldest Chinatowns in Latin America, dating back to the 16th century, “Barrio Chino” in Havana, Cuba, and represents the mixing of various cultures by merging Asian scales with Afro-Cuban rhythms. It is an excellent piece, and Barrueco and his students perfectly captured the mystery of the improvisatory opening, the later clave and habanera rhythms, and the over-the-top portrayal of an indigenous Cuban Santeria religious ritual that provided the spellbinding climax.

Barrueco gave a spoken introduction to The Enchanted Island, telling how he decided to ask Assad to compose the work. In an allusion to the paucity of music written for three guitars, he introduced the next set of music, by Astor Piazzolla, by relating that after the group had learned the commissioned work he called Assad again and told him that now they needed more to play and asked him to arrange something suitable. Piazzolla’s Fuga y misterio, beginning with a three-voice fugue in tango style, and Revirado, meaning crazy in Argentinean slang and full of Piazzolla’s elaborate counterpoint and rapid shifts of mood, were ideally suited to the medium.

After an enthusiastic ovation, Barrueco impishly said, “So I told Sergio we needed an encore.” In the end, the night belonged to Assad, a member of the faculty at the San Francisco Conservatory of Music and an internationally acclaimed composer and performer, almost as much as to the three guitarists. The encore was a medley of tunes written by Charlie Chaplin to accompany his movies. Barrueco, Meng Su, and Yameng Wang brought the evening to a lovely conclusion with witty and sentimental performances of music from Modern Times and other classics. I’m sure I wasn’t the only member of the audience who was moved in the next days to search out and watch Chaplin’s touching and funny films.