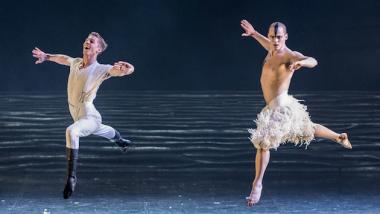 The Bourne Identity is unmistakable. Indeed, in Matthew Bourne’s Swan Lake, a radical retelling of the ballet classic which opened at the Ahmanson Theatre last week and is running through January 5, the male avians are back in all of their hissing — and corporeal — glory. For those unfamiliar with the now iconic work, Bourne’s version jettisons a flock of dainty female swans for violent, bare-chested, barefooted males. And although the work is danced to the brilliant Tchaikovsky score, the 1895 story has been contemporized and includes a sendup of the House of Windsor, as well as homoerotic and Freudian twists, the latter coming via an unhealthy mother-son relationship à la Hamlet.

Bourne’s company, New Adventures, first performed Swan in 1995 at London’s Sadler’s Wells, propelling its director-choreographer to international fame. After making its North American premiere in 1997 at the Ahmanson, it went on to win three Tony Awards on Broadway. The dance drama returned to Los Angeles in 2006, and while this latest iteration has been tweaked a tad, it is the world that has drastically changed since Swan initially jolted its audiences: There were no iPhones or social media platforms; politics — including Brexit — has become a bona fide blood sport; and Bourne is now Sir Matthew Bourne, having been knighted in 2016 for his contributions to dance.

Above all a storyteller, the 59-year old Brit has always been heavily influenced by film and this production is no exception, with his lead dancers — Will Bozier as the Swan/Stranger is a bold take on the Odette/Odile ballerina role and Andrew Monaghan is the repressed Prince — both are movie-star swoon-worthy and gifted with acting chops several cuts above everyday terpsichorean pantomime. (Double casting includes Max Westwell and James Lovell, respectively.)

But this Swan still mines eternal themes — the longing for love and for freedom — and when the curtain opens, the Prince, a tortured soul whose journey is a bleak one, is seen in a giant bed emblazoned with the Royal insignia (with Netflix’s The Crown now in its third season, monarchy watchers are still in thrall). Here, however, this Queen (Nicole Kabera) is not only icy, but verges on the nymphomaniacal, seemingly competing with her son for male, er, companionship. The Prince’s Girlfriend (Katrina Lyndon), a ditzy blonde with exceedingly bad manners (she also makes a brief appearance as a scruffy-looking park habitué who feeds the swans) and the Machiavellian press secretary (Jack Jones) round out this bunch of near-misfits. (All lead roles alternate with other principals throughout the run.)

It’s no surprise, then, that the prince, acting out against his domineering mother, should fall in love with a Swan, especially one with ripped abs and sporting silk-feathered pantaloons in Act I, with Act II’s Stranger swaggering in studly black leather. As arrogant as he is lustful, Bozier compels at every turn, his leaps Nijinsky-esque, his demeanor utterly compelling, while the pair’s blistering duets are a study in torrid partnering and controlled abandoned, their time together also managing to offer a whiff of vulnerability.

If this is avian love, bring it on.

As Bozier embodies virility, ferocity, and grace, the corps de ballet of male swans equally dazzles with technique, especially by dint of their sheer numbers — some two dozen. Deploying powerful unisons and a kind of mob mentality (Alfred Hitchcock’s The Birds could never have looked so good), these creatures are, to put it bluntly, not to be messed with.

The irreverent Bourne also pokes fun at traditional ballet during the Opera House scene, his fairy-wing clad Moth Maiden (Mari Kamata) executing tiny bourrées and entrechats while the vignette’s Nobleman (Alistair Beattie), keeps his charges in fine pointe-work fettle. As for distractions, the Prince’s Girlfriend makes quite the racket in the Royal Box, especially when her cell phone rings — hello!

Lez Brotherston’s set and costume designs are picture-perfect, down to a mechanical corgi on a leash, with the dozens of cast members doing double and triple duty as servants, nightclub (SwanK) attendees, and patrons at the royal ball, including a bevy of princesses and escorts from France, Romania, and Spain. The club scene features some cool, flapper-type dance moves, their silhouettes a frenzied blur of late-night carousing, whereas the Cygnets’ pas de quatre makes for some indelible head-bobbing and delicious dipping, somewhat reminiscent of the all-male Les Ballets Trocadero de Monte Carlo.

But this Swan obsession can only go so far before fowl play wins out: Near the work’s end, the Prince, having lost his mind, is asleep back at his royal digs when a bird burrows up from his bed, Alien-like, with his fellow feathered creatures also flocking about in lockstep. The spectacle, something akin to a Bosch painting, catapults to a tragic denouement that also takes its cues from Tchaikovsky’s fiercely melodic score. When the Queen Mama discovers her dead son, the dark tale (enhanced throughout the production by Paule Constable’s lighting design), comes to a thrilling close.

Swan Lake, beloved as it has been and always will be, balletically speaking, is, in Bourne’s hands, a masterpiece of startling beauty that takes birdwatching to delirious new heights.

The production, choreographed by the artistic director in 2009, returns to the War Memorial Opera House after a six-year absence.

If you want to see a literal corps de ballet, or body of the ballet, you have to see the Mariinsky; the company has returned to Cal Performances with a Swan Lake.