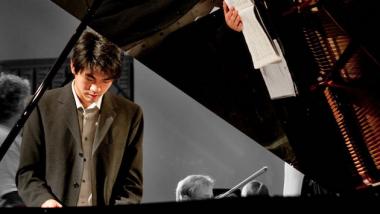 The Maturing of an Artist: Sean Chen Goes Deep at the Steinway Society

It has been four years since American pianist Sean Chen last performed in the San Francisco Bay Area. As a last minute-substitute for Vadym Kholodenko, gold medal winner of the 2013 Van Cliburn Competition, Chen (who came third in 2013) left a strong impression.

Now a self-assured 29-year-old, Chen described his Saturday night Steinway Society recital program as “nostalgia and bells.” The first half comprised works by lesser-known composers: Variations on a Theme of Chopin by Franco-Catalan composer, Federico Mompou; and Sonata-Ballada, Op.27 by Russian Nikolai Medtner.

Based on Chopin’s brief Prelude No.7 in A Major, Mompou added layers of colors while maintaining the simple harmony underneath. It was originally a composition for piano and cello; a full orchestral version was commissioned by the Royal Ballet for a production that never materialized.

Chen added more colors and layers as the variations progressed, but eventually faded to pastels in the last variation, as if the vision was but a dream.

Medtner was a close friend of Rachmaninoff and his music evinces the same lyrical, rich Russian romanticism, yet with more layers, and with complex counterpoints and polyrhythms. In performing Medtner’s dense scores, there is a danger of the music becoming vague. The third-movement fugue, in particular, with its two “false starts”, is particularly formidable, featuring daring harmonic developments. In that movement, Chen created a thunderous crescendo towards a climactic moment, arriving at one of the motifs that he had played earlier, in introductory remarks, creating an, “Aha!” moment. It was revelatory, and left no ambiguities or vagueness.

The second half of the program began with Miroirs by Maurice Ravel. In the Q&A session after the concert, Chen boldly claimed that his affinity for Ravel came from video games. He claimed that many video game composers were influenced by the rich tonality of extended harmonies that Ravel employed in his compositions. It is not hard to imagine that many hours of playing video games in his youth familiarized him with the rich colors evident in his interpretation.

The fleeting chuckles in “Noctuelles” (Moths) were fickle, and the persistent bells (again) in “Oiseaux Tristes" (Sad birds) rang oppressively. Yet the imagery expanded to the horizon in “Une Barque sûr l’Océan” (A sailboat on the ocean), which rolled with a roar. Some of the biggest waves threatened to overturn the small boat, and distant thunder was threatening. Chen painted a vivid picture in motion.

The extremely fast repeated notes in “Alborada del Gracioso” were executed fluidly, and the Spanish rhythm danced passionately, though the climax at the end sounded almost polite and gentlemanly.

Rather than concluding the recital with the sublime but anticlimactic “La vallée des cloches” (Valley of Bells), Chen dove straight into “Toccata” from Le Tombeau de Couperin at a frightening pace, right after finishing Miroirs. The machine-gun rapid notes created a pointillistic soundscape that was precise and deliberate, as if we were surrounded by the intricate movements of a Swiss watch.

As an encore, Chen turned up his showmanship, and delivered a very Lisztian improvisation on “Happy Birthday” for Nancy Jensen, the artistic director of the Steinway Society. With a brief quote from Liszt’s transcription of “Isoldes Liebestod” from Wagner’s Tristan und Isolde, the evening concluded.

Dancing through a varied program, much of it in three-quarter time, pianist Sean Chen proves himself an estimable keyboard artist and a fine showman.

The pianist was eloquent, both speaking and playing, in a big recital.

In a generous recital at Davies Symphony Hall, Yuja Wang showed her trademark command, while also revealing gaps in artistry.