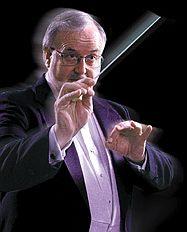 David Bratman on May 18, 2009
Everybody knows Carl Orff’s Carmina Burana. Each century has its standard, default large-scale choral work (Messiah, Verdi’s Requiem), and, like it or not, Carmina Burana fills that role for the 20th. So it’s a good work to hear to judge the strength of a choral conductor, and in that spirit I went to hear Mitchell Sardou Klein lead the Peninsula Symphony on Friday at the San Mateo Center for the Performing Arts.

The performance was rather disjointed in the beginning, with odd pauses and abrupt shifts in tempo in the middle of movements, even when not excused by Orff’s changes in rhythm, but it built up, becoming more consistent and powerful as it went on. The character portraits in the later “In taberna” and “Cour d’amours” sections were more effective than the earlier, stark pieces, and Klein was very considerate of his singers, allowing the soloists to set the tempo and the mood. His beat, however, was not always as clean as it could be, and some orchestral attacks were smudged.

The event was hindered only by acoustics and technology. The technology belonged to a laptop computer that was supposed to project English supertitles onto a low board on the stage floor. (Thus, much of the audience would have had difficulty reading it anyway.) “It worked during rehearsal,” said the voice on the PA apologetically, but half a dozen technical people hovering over the computer couldn’t make it work this time, though they delayed the performance an unconscionably long time trying. Lesson one: Always test a computer system each time you plug it in. Never rely on its having worked last time.

No matter; the audience was better off not knowing that the Latin words the Ragazzi Boys Chorus was so sweetly singing meant “Cupid flies everywhere seized by desire/Young men and women are rightly coupled.” On to the acoustics, which in the form of the deep stage and the wide high-school auditorium meant that the San Jose Symphonic Choir in back was drowned out, often completely, whenever the orchestra was playing loudly.

Which wasn’t terribly often. Carmina Burana is a difficult work to judge an orchestra by, because the accompaniment is so often quite sketchy. But there was enough to tell that the Peninsula Symphony is an accomplished ensemble for nonprofessional orchestra. Klein has been its music director for 24 years, but I confess this is the first time I’ve heard the orchestra since before he took over. It’s advanced a lot from the amateurish band I once knew. While the violins had a little trouble with Orff’s motor rhythms — they played hesitantly, as if they couldn’t quite believe Orff wanted them to sound like that — the rest of the orchestra dived in enthusiastically. A gold star goes to principal bassoonist John Givens’ delightfully grotesque performance of the solo at the beginning of the “roasted swan” number. Never before in my hearing has this high-pitched lament sounded so much like the honks of a dying bird.

Inaudible behind the orchestra at times, dangerously exposed at others, the San Jose Symphonic Choir was conspicuously always trying as hard as possible. The effort was even visible in their faces. The tenors taking pains to enunciate the fast tongue-twisters in “Floret silva nobilis” and “In taberna,” the sopranos showing strength but lightness in the coy “Chramer, gip die varwe mir,” the strong small alto section in the lyrical “Chume, chum geselle min,” were all heard and appreciated.

The solo singers came out on stage only for their individual numbers. J. Raymond Meyers makes a small career out of singing the lament of the roasted swan, the only tenor solo in the entire work.Visually emotive, his slightly strained voice radiating the swan’s suffering, he’s always a treat to hear. Soprano Nikki Einfeld has a fairly low voice for a coloratura soprano. She was lively but her sound was relatively thin and a bit querulous. Her rather disheveled hair completed the impression that she was auditioning for an operatic mad scene in the short cadenza “Dulcissime.” Baritone Eugene Brancoveanu was the star of the piece. His immensely powerful voice, nasally resonant in its low ranges and operatically expressive higher up, was overwhelming. He was particularly good at the pompous character-painting in the recitative of “Ego sum abbas.” His only flaw was that his voice is so strong he couldn’t constrict it enough to create anything that could pass for a decent falsetto, as required in “Dies, nox et omnia.”

Two other composers were represented on the program, Max Bruch and Peter Ilych Tchaikovsky. Tessa Lark, now aged 19, is a violinist from Kentucky who received first prize at last year’s Irving M. Klein International String Competition. (This year’s is coming up next month.) Part of her award was the opportunity to perform a concerto with the Peninsula Symphony, and here she was to do it. This was the furthest thing possible from the booby prize, for either party. The concerto was that old warhorse, Bruch’s Concerto No. 1 in G Minor. The Symphony did an entirely adequate job with the orchestral part, and Lark was more than adequate as soloist. Sheathed in a tight green dress, she projected absolute self-confidence and command, being highly expressive as she switched among her violin’s strings, playing double-stops rich with overtones, and giving out enough volume to fill the over-wide hall.

The Bruch concerto is more lyric contemplation than its reputation might suggest, and Lark carried the lyric lines well. Yet she is also capable of unfettered virtuoso display with the same self-confidence, as demonstrated by her performance of a shameless showpiece by Henryk Wieniawski at a noon recital at San Francisco’s Old St. Mary’s Cathedral last Tuesday.

The Peninsula Symphony concert began with a short, tuneful Festival Coronation March by Tchaikovsky, crisply led by Assistant Conductor Jessica Bejarano. Imagine that Tchaikovsky had simply scrawled “tutti” on the first page, and you’ll have a good idea of the orchestration of most of the piece. Here — more than in the more thinly scored Orff — the odd acoustics, from the practice of putting the percussion on the front side of the stage, immediately behind the first violins, stood out.