The soprano and the five composers gathered on An American Song Album are indeed all Americans, but the songs are sourced from across borders of time and place, and the variety is part of the delight of the collection. Melody Moore’s career in opera, as Jake Heggie, one of the composers, attests in the liner notes, has developed her as “a great singing actor.”

This gift is audible from the outset in her approach to Samuel Barber’s 10 Hermit Songs (1953), in which poems left by Irish monks between the 8th and 13th centuries and translated into English depict an unexpected panoply of moods and circumstances, rendered totally accessible by the singer. Moore’s evocative breadth is matched by the dynamic tastefulness of Bradley Moore (no relation), her accompanist on piano. Heggie himself supplies two sets to the album, the first, These Strangers, delivering texts of social and psychic significance by Emily Dickinson, Frederick Douglass, Martin Niemöller, and Walt Whitman. Both composer and singer make these sentiments ring out. Heggie then returns to Dickinson, one of his muses of choice, for a pair of poems under the title How Well I Knew the Light, in which the composer’s trademark support for the concertizing voice is reaffirmed charmingly by Moore. 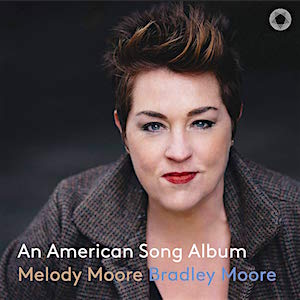 Another extended exercise in dramatic nuance is offered by Carlisle Floyd’s setting of poems by Chilean Nobel laureate Lucila Godoy y Alcayaga, aka Gabriela Mistral. The five songs are all about marriage and motherhood, with the Moores — singer and pianist — moving us through the associated desire, pain, ecstasy, and affection, with Floyd displaying the same sort of understanding of the female condition that enhanced his best-known opera, Susannah.

Aaron Copland, in his Four Early Songs, is not as Coplandesque as he’d become decades later, still under what sound like the various influences of Henri Duparc and/or Richard Strauss, the impressionists, Persian modes, and even lieder. Moore finds the youthful sentiment underlying all this eclectic experimentation.

Not surprisingly for the Pentatone label, Gordon Getty is represented on the song list. The composer, a major donor to SFCV, was in fact present for part of the recording, at the acoustically praised Mechanics Hall in Worcester, Massachusetts, and it proved an opportunity for listeners to get an excerpt from his yet-to-debut opera, Goodbye, Mr. Chips. It’s “Kathy’s Aria,” otherwise titled by its opening line, “Chips, darling, it’s started.” With the text adapted by Getty from the novella by English writer James Hilton, both music and singer credibly inhabit the luminous, good-hearted persona of the titular schoolteacher’s beloved wife.

There’s yet another attractive variety showcase in Getty’s setting of Three Welsh Songs. Moore virtually warbles in resonance with the avian spirit of “Welcome Robin,” then turns ticklish in the doggerel of “Kind Old Man,” enhancing the humor and flexing her vocal range by, at one point, singing an octave below the written melody. Moore’s lyric soprano is enchantingly experienced on the familiar “All Through the Night,” to which Getty brings a fresh arrangement and some of his own words, and on which Moore works a different interpretation in each of the three verses.

In the closing pair of Getty settings, Moore draws on early personal exposure to church music for an understated but elegant reading of the spiritual “Deep River,” and then renders his questing, loving, and rather surprising send-up of “Danny Boy.” The listener is left with a rare takeaway of a personal encounter with a genuine and credible performer.

After diva Angela Gheorghiu is stricken with terrible nausea and intestinal flu, SFO favorite Melody Moore steps in after Act 1 to make her role debut as Tosca in a production otherwise wanting for drama.