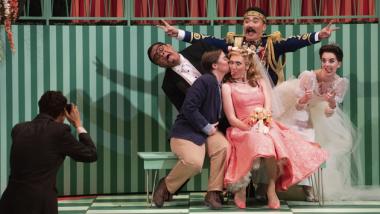 The little-performed Il re pastore (The shepherd king) is billed as early Mozart. True, he was only 19 when he wrote it, but he had already written nine other operas! Il re pastore has a similar structure and sound to Mozart’s even-earlier opere serie (Mitridate and Lucio Silla). It’s a barrage of arias strung together by recitative, with ensembles saved for special occasions like the end of an act. The pieces themselves are familiarly Mozartian. Flowing vocal lines build momentum until they burst into flights of fiendish coloratura, floating over the stately strains of a Baroque orchestra.

The plot features a magnanimous ruler, Alessandro (Alexander the Great) and two couples, the shepherds Aminta and Elisa and the aristocratic Agenore and Tamiri, who are torn between duty and love. Alessandro reveals that Aminta is the rightful king of Sidon and insists that he marry Tamiri (the daughter of the previous, deposed king) to ensure peace. Both couples briefly wallow in despair, and then reveal their previous attachments to Alessandro, who promptly permits them to marry for love. (It’s all a bit frothy and unhistorical for the opera seria label it sometimes receives. Actually, its librettist, Metastasio, termed it a “serenata,” a lighter genre.)

Merola’s production, directed by Tara Faircloth, takes the material just seriously enough. The lovers’ brief anguish is soberly presented, but everything around it oozes silly charm. My favorite details included the topiary sheep, Alessandro’s strange fascination with said sheep, Elisa’s gleeful binding of Agenore, and the squad of stony-faced supernumeraries that served as royal bodyguards, masseuses, spies, manicurists, dressers, and florists. Faircloth’s direction packed the opera full of stage business, but it was always engaging and purposeful.

Merola is a world-renowned and fiercely competitive program, so it’s no surprise that they can cast top-quality young singers. Zhengyi Bai sang Alessandro in a muscular but maneuverable tenor, complete with plenty of mugging for the audience (which fit his character’s obsession with his public image). His voice promises a good Tito (in Mozart’s La clemenza di Tito) in the near future. The other tenor, Charles Sy (Agenore), made for a fine contrast, all buttery tone and puppy dog expressions. For his angry second-act aria, he pushed a sharper edge into his sound.

As Agenore’s beloved Tamiri, mezzo-soprano Simone McIntosh proved an arresting presence. Part of that was her imperious demeanor (Tamiri is a princess, after all), but it was also the sheer size of her sound. Her voice filled the room like no one else’s, and she navigated Mozart’s music with perfectly polished legato. I’ll be keeping an eye out for her in larger houses in the years to come. Soprano Patricia Westley’s Elisa looked a confection in her pink A-line dresses and sang bright streams of bubbly coloratura. Her mischievous energy onstage was infectious. This Elisa knew what she wanted, and woe to anyone who got in her way!

As the titular “shepherd king” Aminta, soprano Cheyanne Coss projected a strong “lusty young man” vibe (though she sometimes overdid the swagger). She showed off nice flexibility and trills in Act One, but it was in her Act Two rondò (“L’amerò, sarò costante”) that she really shone. She married a rich, chocolatey tone with precise dynamic control, letting held notes bloom achingly. Il re pastore’s emotional impact depends on the strength of that aria, and Coss delivered it with the beauty and expression it deserved.

Conductor Stephen Stubbs kept everyone together. A 29-piece orchestra felt luxurious in a venue as small as the SFCM auditorium, but the instrumentalists were restrained enough to keep the focus on the singing. The recitative sometimes dragged (too strictly delivered and unconversational). The moderate pace of the set pieces let the audience relish them without getting bogged down.

The chance to see Il re pastore presented this lovingly was an unmissable treat. Such productions serve as a reminder that there are plenty of Mozartian gems before Don Giovanni and Figaro — and they’re worthy of attention.

Precision, preparation, and a wide set of interests and activities help make Fabiano’s performances so individual and compelling.