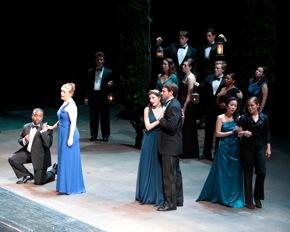 Some other Grand Finals (as they were known before competition, incongruously, became a dirty word) and Grand Finales featured big, well-known arias and duets, they often had a couple of young singers blowing everybody away, and — something I never understood — they opened with an overture, unrelated and unnecessary to a three-hour concert of singing.

No overture this time! No Verdi, no Puccini (not that there is anything wrong with that, and don’t we have an even dozen Madama Butterfly performances coming up next month?), but doubling Donizetti and Richard Strauss. Almost all excerpts were something other than the “usual” — conversational duets, for example, instead of the big tunes. Refreshing.

Under Dean Williamson’s supportive — if at times laggardly — direction, the Opera Orchestra played well, the cellos with special brilliance.

Directing the quasi-staged evening was one of the program’s apprentice stage directors, Ted Huffman, a young artist who will go far. Blessed be opera directors who interfere with the work and the artists the least. Except for occasionally excessive smooching and one probably unintentionally hilarious suggestion why Juliet tried to change her mind about unwedded bliss, Huffman’s direction was restrained and to the point.

He had four cypress trees (or reasonable facsimiles) dressing up the stage, and, wouldn’t you know, the opening Rake’s Progress excerpt, “The wood are green,” refers to the Cyprian Queen. Nice homophonic reference. (Or maybe not.)

Huffman’s subtlety was at its most amusing when, in a Don Pasquale scene, he had Eleazar Rodriguez enter the stage, hand Ernesto’s letter, silently, to Norina, and exit. The “E il dottor no si vede” scene is without Ernesto, but if the excerpt had continued, Rodriguez would surely have been the tenore leggero for the occasion.

The overall quality of singing was sky-high, and of compelling interest, at times creating genuine excitement.

Instead of Merola’s usual two staged operas during the 10-week program, there was only one this year, so even avid followers of the program had their first experience Saturday of some of the singers.

Among those, for me, there was the “discovery” of Colleen Brooks, singing the Composer in “Sie hält ihn für den Todesgott” from Ariadne auf Naxos in an impossibly mature “true Straussian” manner, bringing an outstanding musical authenticity to the role. Add Hye Jung Lee’s charming Zerbinetta, and there was one of the many high points of the evening: romantic, funny, the music going in right “here” (indicating one’s chest).

Among Merolini already well-recognized, it proved to be a special night for Rodriguez, whose voice rang out in the 3,200-seat War Memorial Opera House, in a heartwarming “Quoi! Vous m’aimez?” from The Daughter of the Regiment, his Tony and Abigail Santos Villalobos’ Marie having a ball, and carrying away the audience. Still the youngest Merola singer, Rodriguez has already landed a contract with the Heidelberg Opera.

Ao Li, who scored so well with his Elixir Belcore last week, sang “Or dove fuggo io mai?” from I Puritani and once again the richness of his voice, his innate musicality, and his effortless projection impressed mightily.

Another high point came with that low-low note at the end of “Wie schön ist doch die Musik” from Strauss’ Die schweigsame Frau, when Kevin Thompson’s true bass astounded the audience as he held that note forever, without the slightest indication of tiring or running out of air. Compare it with, yes, a Matti Salminen performance.

Janai Brugger-Orman is a rare singer, being at home at whatever she does: She sang Ann Truelove and Norina with equal panache. In the Stravinsky excerpt, she was in excellent company, with Alexander Lewis’ easy, natural Tom Rakewell and Thompson’s sonorous Truelove.

In an understated, but triumphant, performance, Kevin Ray’s “O loss of sight ... total eclipse” from Handel’s Samson gripped the hall.

The evening closed with a dozen Merolini — led by Ryan Kuster and Valentina Fleer — in “Pian, pianin le andrò più presso” from The Marriage of Figaro, reminding the listener of the usually neglected subtitle: “or the Day of Madness.”