For those of us who love opera, the Merola Grand Finale is like a decisive first date. Some singers who parade their stuff before us may have the looks, the glamour, the ease, and the savoir faire for an enjoyable outing. But, when all is sung and done, how many of those who traversed multiple octaves in an attempt to wend their way into our hearts do we really want to spend another evening with?

Opera history is filled with magic moments in which entire audiences fall in love with specific singers. Saturday's Merola Grand Finale wasn't exactly like that. In fact, for the first half of the concert, there weren't even programs to leaf through. Although they had been delivered to the War Memorial Opera House, no one could find them. All that audience members had to go by before intermission were quick, amplified announcements of singers' names plus easily missed projected names of the operas and specific excerpts. Even the two-page zerox that was hastily distributed in intermission inexplicably omitted the titles of the selections. No one had warned us ahead of time that this was to be a blind date with 29 singers who had spent the last 12 weeks working day and night to perfect their craft.

The evening began strong, with Ukrainian baritone Aleksey Bogdanov holding forth in Tonio’s prologue from I Pagliacci. Backed by eight other Merola participants positioned in static tableau before a set that remained constant throughout the evening, Bogdanov imbued his dark, open voice with an edge of evil. A bit blustery at times, he masterfully held the stage with commanding tone. Although his high ending was not as glorious as the music demands, the ability to lift us out of our seats with a blazing ending could come within the year. 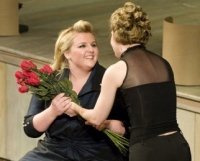 The next high point came with the extended duet “Ich danke, Fräulein ... Aber der Richtige” from Strauss’ Arabella. To Susannah Biller’s soaring soprano, which was notably free on top, Lori Guilbeau brought a substantial soprano with exceptional body in the voice. Perhaps it is the curse of a critic to imagine hearing, singing alongside note for note, the unforgettable voice of one of Strauss’ favored sopranos, Lotte Lehmann. (Lehmann recorded the duet with Luise Helletsgruber in 1933, the same year that the two sang Arabella and Zdenka in the Vienna premiere.) Although Guilbeau does not yet evidence Lehmann’s incomparable gift to make every note of her “someday my prince will come” aria sound as if her heart were about to burst open, the gravitas is there.

Mezzo-soprano Margaret Gawrysiak blew us away with her glorious rendition of “Da, chas nastal! ... Prastitye vi” from Tchaikovsky’s Joan of Arc. Hers is a voice of substance and gravity, with considerable pathos. The fabulous, blazing ending had us all cheering as if our lives depended on it. It formed a striking contrast with what followed, a dispirited quintet from Wagner’s Meistersinger in which soprano Katie Crist’s sour Eva dominated heldentenor Gregory Carroll’s underpowered Walter, and during which neither tenor Alex Mansoori’s David nor contralto Suzanne Hendrix’s Magdalena could be heard.

But perhaps it’s unfair to single out that one performance. There were a host of arias and scenes that shall go without mention. Indeed, by intermission, I was pondering how to write a review that would not sound too much like someone growling under his breath.

Best to stick with the high points. One of them came from bass-baritone Yohan Yi, who displayed a gorgeous, dramatic instrument in “Ves tabar spit’ ... Kak, nezhna priklanas ka mne” from Rachmaninov’s Aleko. I also loved the fetching tone of mezzo-soprano Caitlin Mathes, who needed only to add more weight to her Rosina in the duet “Ma bravi! Ma benone. ... Dunque io son, tu non m’inganni” from Rossini’s Barbiere di Siviglia.

We discovered in Nathaniel Peake a tenor of considerable elegance. Never forcing his instrument, his Duke, to Sara Gartland’s exceptionally free if somewhat squeaky Gilda, in the Act 1 duet from Verdi’s Rigoletto exhibited masterful phrasing, beautifully sweet highs, and an ability to infuse a line with grace and feeling. Is Peake a Tito Schipa in the making? If only we had heard more from him during the evening.

Tenor Brian Jagde riskily held forth, solo, as MacDuff in “O figli, o figli miei ... Ah, la paterna mano” from Verdi’s Macbeth. If the voice opens further and gains more weight, as it very well may, Jagde will be another singer to watch. Baritone Michael Sumuel is already there, and his gorgeous, commanding voice in “Sì, tutto cangerà ... Là del ciel” from Rossini’s La Cenerentola did much to compensate for occasionally smudged coloratura. Whoever coached the mezzo-soprano to act like a cheap flirt instead of a humble princess-to-be had better go back to the score before sullying another performance.

Throughout the evening, there was a marked contrast between singers who were able to fill the stage, and those who seemed dwarfed by it. I recall Nicholas McGegan saying of a shining performance by Ruth Ann Swenson, “Ruth Ann is a star.” If there’s anything the majority of 2009’s Merolini have yet to learn, it is how to let their inner lights shine.