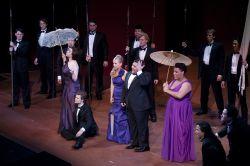 We all dream of being “there” when a young singer steps into the spotlight and announces, through voice and artistry, “I have arrived!” Judging from the packed orchestra section at Saturday’s Merola Grand Finale in the War Memorial Opera House, that dream is shared by thousands who know that the final concert of San Francisco Opera’s annual intensive summer training program often serves as a coming-out vehicle for singers on the brink of stardom.

At this year’s Grand Finale, only a few of the 20 singers, whose average age was 27, declared their readiness. First and foremost was baritone Jonathan Michie, 26, whose perfectly enunciated “Batter my heart” from Adams’ Dr. Atomic seized us with its gorgeous, commanding tone and emotional directness. Michie seemed to be working hard just two weeks earlier, when his hilarious Figaro in Merola’s first cast Barbiere di Siviglia won over his audience with its physical as well as vocal flexibility. With this performance, he signaled that he is both a complete artist and a natural stage animal.

Philippe Sly’s youthful, uncomplicated sound shows tremendous promise to richen in the coming decade.Credit for Michie’s success is also due apprentice stage director Ragnar Conde and the San Francisco Opera Orchestra. Conde, who staged all 17 opera excerpts (presented on the set of Turandot, the season opener), managed to weave one aria into the next, sometimes by having artists who had just finished singing remain onstage as either chorus members or prop bearers. In the case of the Dr. Atomic aria, he had what looked like all 19 other singers enter slowly, in twos and threes, to eventually form a shell that engulfed Michie. It was a most inventive way to bring everyone onstage to close the first half of the concert.

The orchestra played the Dr. Atomic aria, which they performed at the SFO premiere, as if they owned it. If they were less convincing in the seemingly obligatory overture from Rossini’s Semiramide, conductor Johannes Debus did little to relieve tedium. (Why are we almost always forced to sit through uninspired orchestral excerpts before the singing gets going?)

The other triumph in the first half was 22-year-old bass-baritone Philippe Sly’s duet with tenor Daniel Curran, from Handel’s Ariodante. Sly was commanding in all but his lowest notes, and his youthful, uncomplicated sound shows tremendous promise to richen in the coming decade. He was also a sonorous, dexterous riot in the half-closing Rossini ensemble.

Equal cheers went to baritone Joo Won Kang, 29, whose extremely exciting, gorgeously voiced “Lorage s’est calmé ... O Nadir” from The Pearl Fishers culminated in a fabulous high note. Some may think such money notes cheap thrills, but when they’re combined with command throughout the range, they ring like gold.

Soprano Suzanne Rigden, 25, who a pitch-perfect friend informs me emitted a perfect high F when she sang Rosina in the first-cast Barbiere, was a bright, fresh, and delicious Blonde in her duet from Mozart’s Abduction From the Seraglio with 30-year-old bass Peixin Chen. Respectful of the size of Rigden’s light soprano, Chen held back, emitting far more volume in a fine “O patria ... O tu Palermo” from Verdi’s Vespri siciliani. The voice, with its fascinating strong overtones as it ascends, wants only for more vibrato rather than straight tone on the very top.

Deborah Nansteel certainly had the top money notes when she hit them, but nerves hurled her voice into unknown territory.Soprano Marina Boudart Harris, 25, may not yet be magnetic onstage, but the glamour of her voice in the aching, soaring Straussian phrases of Arabella’s “Das war sehr gut Mandryka,” to the Mandryka of baritone John Maynard, 32, showed great promise. If only the arc of her final phrase had held together.

San Francisco bass Adam Lau, 27, coupled vocal authority with a terrific low note in his duet with Maynard from Bellini’s Puritani. The beloved “Tornami a dir che m’ami” duet between Ernesto and Norina in Donizetti’s Don Pasquale served as a near-perfect vehicle for tenor Daniel Curran, 25, and Xi Wang. Only the lack of a decent trill from Wang prevented the duet from achieving perfection.

Coloratura and Other Pitfalls

Wang joined soprano Elizabeth Zharoff, 25, and mezzo-soprano Laura Krumm, 23, in singing coloratura vehicles without the vital trills. Certainly, Zharoff’s big voice is better suited to Lisa in Tchaikovsky’s Queen of Spades than to either her decidedly un-French-sounding Manon or, in the Schwabacher Debut Recital, her technique-deficient duet with Krumm from Bellini’s Capuleti e i Montecchi.

It’s hard to tell if either mechanical conducting or perhaps technical or imaginative constraints on the part of Wang and tenor Cooper Nolan, 25, were responsible for the strict tempo that rendered pedestrian many potentially enrapturing phrases of “Lucia, perdona ...Sulla tomba che rinserra ...Verranno a te” from Donizetti’s Lucia di Lammermoor. For whatever reason, the aria fell flat.

By contrast, mezzo-soprano Renée Rapier, 25, wants less for technique per se than personality. The top of her voice is exciting, but she is still developing animation and sparkle. In different mezzo repertoire, Deborah Nansteel, 27, certainly had the top money notes when she hit them, but nerves hurled her voice into unknown territory in her first-verse climax to “Divinités du Styx” from Gluck’s Alceste.

Now we’ll wait and see who makes the cut as a San Francisco Opera Adler Fellow or as a trainee in Chicago, Houston, or the Metropolitan Opera’s equally famed Young Artist Programs. It may be sooner than later when we find out who is fortunate enough to go from the bright lights of Van Ness Avenue to leading roles in major houses.