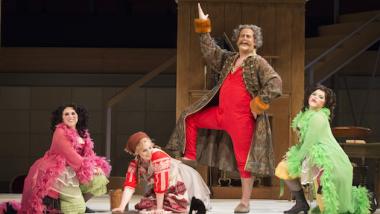 Merolini Have a Ball With La Cenerentola

Spilling out over three levels of the San Francisco Conservatory of Music main stage, the Merola Opera Program’s vigorous and brightly detailed production of Rossini’s La Cenerentola made its happy debut on Thursday, August 3. In the first of two performances, San Francisco Opera’s stellar summer training program pulled out all the stops in three visually colorful, coloratura-crammed hours. If its occasional overeagerness to entertain yielded some labored acting and literal-minded directorial underlining, the evening registered where it counted — in the musical riches displayed by the young and deeply gifted company.

With seven substantial principal roles and a male chorus that keeps coming back for more, this 1817 setting of the Cinderella story is an ideal, demanding showcase for vocal firepower and finesse. Everyone gets plenty of stage time, in arias, layer-cake ensembles, and verbally dexterous recitative. The orchestra, here under Mark Morash’s disciplined baton, gets a full workout as well, from the eventful overture on through an abundance of lyrical and pinpoint effects.

The two wicked stepsisters are set out in sustained comedic cartoons. Soprano Natalie Image and mezzo Edith Grossman were both excellent, walking the tricky line of ringing clarity and the acidic shrillness their caricature roles induce. They also preened and squabbled peevishly, with each other and anyone else in sight.

As their avaricious stepfather (one of two male gender-role reversals in this version of the tale), bass-baritone Andrew Hiers filled Don Magnifico with self-serving bluster and an apt flair for obtuse self-parody. His voice was all growly, cunning calculation.

In another of the opera’s three low-register roles, bass-baritone Christian Pursell picked his way with precision and growing élan through the part of Dandini, a court valet who disguises himself as Prince Ramiro in order to help suss out his boss’s marital prospects. Pursell seemed a little restrained early on, his voice held in slightly fussy restraint. But as Dandini began to fall for the sublime heroine he was supposedly romancing in name only, Pursell’s voice grew warmer and more intimate. Once out of his royal disguise, he seemed fully and confidently at ease, tossing off the meta-theatrical aside, “I always knew things would change in Act Two.”

As the true Prince Ramiro, who traded valet places with Dandini to eye his own prospects, tenor Anthony Ciaramitaro delivered a vivid and exciting impact. Wide-eyed with love-struck wonder in the presence of the oppressed title character, he sang with an urgent, almost belting drive behind his entrancing, creamy tone.

Samantha Hankey took on the fiendishly difficult lead role of Angelina, the Cinderella figure who gets to go to the ball after all and officially wins the Prince’s heart that she’s already secured (librettist Jacopo Ferretti’s mistaken-identity storytelling is secondary to all the florid singing). Hankey made an oddly detached impression early on, her contralto voice sounding a little cloudy and her acting approaching a half dream-state that suggested she knew her happy fate in advance. There was never quite enough at stake in her transformation.

Gradually if inconsistently, she rose to the role’s formidable challenges. Even when her voice turned harsh at times, Hankey gave full value to her highly decorated arias and ensembles. Looking seraphically lovely in her bright-red ball gown, Hankey made a feast of her extended forgiveness aria at the end.

Bass-baritone Szymon Wach was a handsome if somewhat light-voiced Alidoro, the fairy godfather who rewards Angelina’s native generosity with a trip to the ball.

The real glory of this Rossini work are the ensembles, with especially choice ones at the end of Act One (“Signore, una parola”) and the remarkable staccato-paced sextet near the end of the evening. As one singer after another broke into florid commentary, the Merola troupe became a company of brilliant equals, each shining in their moment and rejoining the whole. The fine chorus of lively palace guards added luster every time they marched onstage.

Director Chuck Hudson exploited the broad contours of the Conservatory house to good advantage, just as his counterpart Peter Kazaras did in Merola’s July triple bill of one-act operas. The multiple entrances and some offstage shenanigans enlarged the action, as did Donald Eastman’s set of movable cabinet-like units. A strobe-lit storm scene was a choreographic gem of wind-tossed figures all but carried away by their umbrellas. But then those umbrellas stayed on and wore out their welcome, as did the repeated sight gag of Cenerentola and Ramiro dropping a tray every time they met. A tendency to illustrate the score’s rhythms got a bit too much use.

A familiar fairy tale might seem like easy audience bait. But Rossini’s extravagantly note-and word-filled version is a substantial undertaking for any company. Merola’s rising stars aimed high, and to a gratifying degree, they hit the mark.