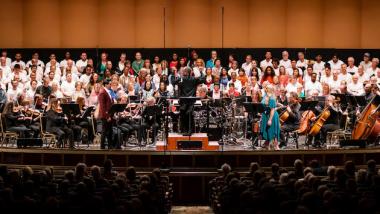 When it opened on Broadway in 1957, after tryouts in Washington, D.C. and Philadelphia, West Side Story sent an exhilarating shock wave through American musical theater. In refashioning Shakespeare’s Romeo and Juliet as a tale of fated young lovers caught up in a New York gang feud gone tragically wrong, composer Leonard Bernstein, book writer Arthur Laurents, and lyricist Stephen Sondheim made something at once classic and contemporary. The score, with its stirred-and-shaken mix of jazz, Latin dance rhythms, lyrical ballads, raw-boned street argot, and poignant foreshadowing, sounds as vital today as it did 60-plus years ago. So, for better and worse, does the book. Music and subject have rarely been more intrinsically bound.

Oakland Symphony Music Director Michael Morgan made that point explicitly on Friday, May 10, first in preperformance remarks from the Paramount Theatre podium and then, more importantly, by leading an urgent if at times ungainly concert version performance of this great show. Gang violence, as audience members in many big cities including Oakland know all too well, has made West Side a story that’s still sadly of the moment. And teenaged sweethearts are forever seeking the far-off “Somewhere” of their dreams. It’s an evergreen work, trimmed in black.

Right from the start, in an uneven but infectiously agitated orchestral Prologue, the impatient, driving, seductive heat of hormone-fueled street life took hold. The four soloists may have “skewed older,” as Morgan noted, but disbelief was soon happily suspended. Credit Bobby Conte Thornton, as Tony, for scoring the first two vocal lift-offs of the evening. The first came in “Something’s Coming,” which the creamy-voiced tenor lit up with crisp consonants and eager, forward thrust.

Moments after a dialogue exchange with his beloved (soprano Julie Adams) in the Meeting Scene, Thornton brought down the house in “Maria.” Tentative, almost wary of his own feelings at first, he became gradually, inexorably possessed through the number. A voice that sounded a little porous at the top ripened with a gorgeous, gripping possession. This Tony was audibly, visibly love-sick, doubled over at one point, his hands grasping at air, his phrases raked up from the depths. Here, in a number as familiar as any in Broadway musical history, was a West Side moment of musical and emotional daring. Thornton made Tony his own.

Adams was a lovely, open-hearted Maria. The audience, like Tony, had fallen hard for her by the end of the night. It helped that the operatic tremolo started to give way. If Adams needed to find a more playful, lighter approach in “I Feel Pretty,” she partnered beautifully with Thornton in “Tonight” and the prayerful “One Hand, One Heart.” Her lines in “Somewhere” were just right for her voice, and ravishing to hear.

Soprano Eileen Meredith was a game if rather theatrically pallid Anita. She sang “America” with a lively beat and close attention to the lines. (The singers were imperfectly and inconsistently miked.) Through no fault of Meredith’s own, Anita’s teasing exchanges with the women of the Oakland Symphony Chorus and Chabot College Choir didn’t come across. That’s the liability of concert versions with large forces onstage. Some of the lyrics got lost in all the traffic.

Missing, too, of course, were the vibrant dances that director/ choreographer Jerome Robbins embedded in the very DNA of the show. But even with the accommodations and compromises, hearing West Side Story in any form is pleasure renewed and reawakened.

In a winning, last-minute substitution heralded by Morgan in the midst of his witty narration-with-commentary, the Pacific Boychoir filled in for another school group at the last minute to perform the insouciant “Gee, Office Krupke.” Ten strong, they pulled it off with some New Yawk sass and style.

Morgan and the orchestra hit their stride after some sludgy work early on. The percussion section, including a drum kit (Artie Storch) dead center near the podium, did colorful spot-on work all night. The brass was fine as well — celebratory, raucous, and somber with grief as needed.

The evening ended on a strong if slightly anomalous upswing. As Meredith warned about “A Boy Like That” while Adams spun out “I Have a Love,” this duet of caution and heedless love captured the show’s heartbreaking doomed pulse. Then, as Morgan explained, there’s no way to make the downbeat tragic ending of West Side work in a concert version. So the entire company, soloists and choirs, reprised “Somewhere.” With that Morgan and the musicians brought their admirable account of West Side Story home.

Surprisingly, the upcoming performances of the great American musical at the San Francisco Symphony, with a high-powered cast, will be the first-ever concert run-throughs of the entire show.