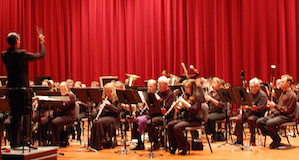 San Francisco finally has its own professional symphonic concert band: the San Francisco Wind Ensemble. It is the brainchild of German-born Dr. Martin H. Seggelke, who in July 2011 joined the music faculty at the School of Music and Dance at San Francisco State University, and serves as Director of Wind Ensembles. As such, Seggelke conducts the SFSU Wind Ensemble and Chamber Winds, leads the Master of Music program in Wind Conducting, and teaches undergraduate classes in conducting.

Last year, Seggelke somehow managed to find 50-or-so leading musicians from ensembles all over the Bay Area, willing to combine their musical forces for nothing more (or less) than the chance to be a part of the creation of a new professional-level ensemble that focuses on original symphonic repertoire for wind orchestra; the kind of music that doesn’t show up on the program of your average high school, college or community band and is unlikely to include Sousa marches or selections from Oklahoma —not that there is anything wrong with that.

The modern wind band is a relatively new phenomenon. It developed in the late 19th century, in large part under the influence of instrument designers and innovators like Adolphe Sax (1814-1894), who not only invented the saxophone, but also created a family of instruments that now function as the lower brass (euphonium, tuba) in a symphonic wind orchestra.

Initially, these wind ensembles played marches and transcriptions of classical orchestral and operatic compositions, but in the early 1900’s composers like Gustav Holst, Percy Grainger, Florent Schmitt, and Paul Hindemith started writing original pieces for wind band and many others followed.

Many of these ‘early originals’ were programmed during SFWE’s first season, and last Saturday the ensemble opened its second season with a concert in Knuth Hall at the Creative Arts Building of SF State, with three more concerts to follow in November, February, and April.

Seggelke, who is artistic director and conductor of the SFWE, chose to model his ensemble on the scaled-down version of the symphonic concert band, with only one player per part, that American conductor Frederick Fennell (1914-2004) established as the Eastman Wind Ensemble at the Eastman School of Music in Rochester, N.Y., in contrast with ensembles from the European wind band tradition (in which I grew up), where wind bands are usually larger, sometimes up to 100 musicians, and include a substantial group of clarinets that functions much like the violins in a symphony orchestra.

Guest conductor for Saturday’s concert was the current conductor of the Eastman Wind Ensemble, Mark Scatterday. In no more than just about five (!) hours over two days, he and the 50 SFWE musicians hammered out a program which included two original compositions for wind ensemble: In Evening’s Stillness by Joseph Schwantner (b. 1943) and Les Couleurs Fauves by Karel Husa (b. 1921), plus transcriptions of pieces by Roberto Sierra (b. 1953) and Dmitri Shostakovich (1906-1975).

Where the SFWE struck gold was with the original pieces ... and convinced me that the San Francisco Wind Ensemble is a very valuable addition to the Bay Area’s musical landscape.

I didn’t particularly care for the two movements of Sinfonia No. 3 La Salsa by Roberto Sierra, which is originally a work for symphony orchestra and transcribed by guest conductor Scatterday; in spite of its lively Caribbean rhythms, the piece sounded muddy and heavy. A quick YouTube check shows that Scatterday’s arrangement is actually better than I initially thought, but Saturday’s performance distinctly lacked detail and transparency.

Where the SFWE struck gold was with the original pieces. Schwantner wrote In Evening’s Stillness for a specific combination of winds, brass, percussion, and piano, leaving out saxophones and euphoniums. It is a colorful, descriptive and at times ethereal piece with delicate smatterings of chords and undulating rhythms, but it was the much less approachable piece by Karel Husa that won me over and convinced me that the San Francisco Wind Ensemble is a very valuable addition to the Bay Area’s musical landscape.

Anyone who has ever rehearsed and performed one of Husa’s pieces — and I have — would agree with Scatterday’s introductory observation that this can be a life-changing experience. Les Couleurs Fauves is no exception. Husa studied in Paris with Arthur Honegger and Nadia Boulanger, and was reminded of the painters he saw and admired as a young music student when he wrote Les Couleurs Fauves — which means something like ‘wild, feral colors’ but also includes a reference to the early 20th-century French painting style called Fauvism.

Anyone who has ever rehearsed and performed one of Husa’s pieces — and I have — would agree with Scatterday’s introductory observation that this can be a life-changing experience. Les Couleurs Fauves is no exception.

Husa’s musical color palette knows no boundaries; it is fascinating, but not all beautiful; some of it is downright raw and unpleasant. It was very impressive, how the members of the SFWE brought this piece to life and made it speak. The Galop from the light opera Moscow Cheryomushki by Dmitri Shostakovich, in an arrangement by Donald Hunsberger (Conductor Emeritus of the Eastman Wind Ensemble) was a technically well played brisk and virtuosic bit of ear candy that concluded the concert.

The biggest musical challenge that any new ensemble has is: grow to be an ensemble, which takes time. One thing that specifically needs to develop is the always delicate balance between brass and woodwinds. By their very nature, brass instruments are a lot louder than woodwinds; there is a serious risk that the ‘enthusiasm’ of the brass players overshadows the woodwinds, as was (too) often very clear on Saturday evening.

Seggelke consciously chose to create a symphonic wind ensemble based on the ideas of Frederick Fennell, who was aiming for greater musical clarity and better intonation by reducing the orchestra to its barest minimum number of players.

Fennell’s many recordings with the Eastman Wind Ensemble (on Mercury Living Presence) prove that this approach works — at least in an ideal acoustical environment such as a recording studio. But in order to make it work during a live concert, you need to make sure that the brass section is well controlled and very well behaved. Another option would be to expand the orchestra with a larger group of clarinets (my preference); the brass would still need to be very aware of its power.

There is only so much that even professional musicians can do in five hours of rehearsal, but in view of this almost ridiculously little amount of preparation time, Saturday night’s concert by the San Francisco Wind Ensemble was a strong display of great musical things already happening, and above all a very promising indication of great things to come.