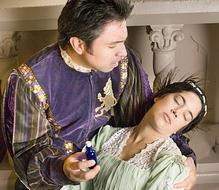 A Mismatch for the Lovelorn

Michael Zwiebach on May 8, 2007
Berkeley Opera boasts that its new Romeo and Juliet, which opened on Saturday night at the Julia Morgan Theatre, is by William Shakespeare and Charles Gounod. And while that’s not entirely true, Artistic Director Jonathan Khuner and his fellow Bardolaters, Lyricist Amanda Moody and Stage Director John McMullen, have succeeded in shoving the work of the 16th-century English poet-dramatist and the 19th-century French musician onto the stage at the same time. The result, it pains me to say, is an unholy mess. The play was larded with much of the operatic baggage that Shakespeare lovers always object to. Meanwhile, shoehorning as much of the Bard as possible into poor Gounod's Roméo et Juliette was enough to make it explode. Many of the scenes, even those that were conceived without much recitative, lacked any musical shape. Using Shakespeare’s dialogue in place of the opera’s recitatives and as a basis for a translation is one thing, but the Berkeley Opera production went further than this. It added scenes from the play that don’t appear in the opera and redistributed numbers in accordance with Shakespeare’s dramaturgy. The actors/singers did their utmost, but couldn’t make a convincing case for either the opera or the play. The twin poetic dictions — Shakespearean English and Moody’s highly stylized flights of fancy — went together about as easily as Juliet and Paris. The problem was compounded by inconsistent tone in Moody’s lyrics, some of which recalled pop ballads (“Always the sunrise of your smile/ Always the midnight of your eyes”), while at other times conjuring Dr. Theo Baker’s old-time opera-ese (“Silver brooms of the angels/ The clouds will sweep away”). The sometimes vertiginous shifts between all these styles quickly became a nuisance. But McMullen and Khuner were worse offenders yet. They produced what amounts to a condensation of the play — not a workable opera libretto. The operatic ball scene, with its parade of famous numbers and minimal, elegantly interwoven plot exposition, was restored to its Shakespearean shape, along with all the expository scenes that the librettists had cut. So, of course, the music functioned as an interruption, and there could be no sense of musical-dramatic sweep. But that’s the whole reason for writing a ball scene in an opera — to allow for a large dramatic canvas, with separate actions that are unified and given a push by the framework of the “onstage” music. The same fault was committed at the beginning of the final scene, which was prefaced by the parts of Shakespeare’s tomb scene that the librettists had cut. Paris confronts Romeo and then, to the somber strains of Gounod’s prelude, the two duel and Paris is killed. There is no reason for Gounod’s music to appear at this point, where it doesn’t effectively support the action. Logically, the prelude is connected to Romeo’s operatic soliloquy, and a sensitive production would stage it that way.

McMullen got superior results from his singing actors in the Shakespeare scenes. But if this were a production of the play, would he have cast a Mercutio with a thick Portuguese accent? Mercutio, the wordsmith? Although Igor Vieira did a marvelous job of parsing and making sense of Shakespeare’s language and was the best singer in the cast, he has to be given a mere “no comment” on his elocution. (And thank goodness for supertitles.) As Juliet, Elena Krell was thoroughly believable and likeable. She’s a natural onstage, with a lot of presence. Musically, she doesn’t quite have the French style down — the rhythms of this music need a little more flow, and less accent. (But that, too, is partly a problem of adding Shakespearean words to Gounod’s music. The romantic lyricism of the music was sunk by the clublike accents of the English iambs.) Krell has a wide, quavery vibrato of a kind rarely heard on operatic stages anymore, but she is well-trained, needing only more open tone and greater control of the top register.

Her Romeo, Jimmy Kansau, is a bright, up-and-coming tenor, a little strained on top, and too unvaried and unsubtle in his phrasing, but ardent and believable. Again, understanding his dialogue was a problem. But if his French is any good, this role will soon be meat-and-potatoes for him. John Bischoff was an excellent Friar Laurence, singing evenly and in tune and conveying his character’s sense of urgency. The supporting roles were inevitably a mixed bag, with serviceable performances outweighing the bad.

The choristers were strong when standing still, a little ragged when in motion. The orchestra, playing Khuner’s reduction, was solid, and Khuner’s conducting, as usual, was flawless. I hope Berkeley Opera will continue to be the adventurous company it always has been. But now is the time to leave Gounod and his distinguished librettists, Michel Carré and Jules Barbier, alone. Their only crime was to produce the best, and most popular, operatic adaptation of Romeo and Juliet. And if you think they botched the job, that’s only because you’re not familiar with the competition.