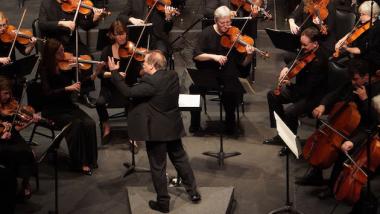 Composers looked to the past on Sunday night, Nov. 17, at Royce Hall. The Los Angeles Chamber Orchestra presented four works from the 20th century through the present — each composed as an interpretation of music from centuries past.

Ravel’s Le tombeau de Couperin began the program with flurries of woodwinds and sinuous lines in the strings. Although composed as an homage to Baroque composer François Couperin, Ravel’s innovative orchestration still makes the music sound downright futuristic. The piece exists in a place without time — an early 20th-century approach to a Baroque suite — and LACO gave it the delicate touch that Ravel needs.

The program featured the west coast premiere of Missy Mazzoli’s Dark with Excessive Bright. The piece, a double-bass concerto featuring standout playing by LACO Principal Bass David Grossman, blended a Baroque swirl with contemporary atmospherics. At times it sounded like Vivaldi in an echo chamber. Grossman handled his instrument as if a bass concerto were the most natural thing in the world. The piece only featured LACO’s string section, and the resonant sound was well-suited to Royce Hall.

Strains of Classical and Baroque technique filtered well through the contemporary sonic landscape. If anything, the piece’s middle sections continued longer than they needed to, but the return to the primary melody at the end packed a big payoff.

At its best moment, the hall was filled with the rare sound of a bass duet, as Grossman’s bass was joined by another, like two whales calling to each other.

Mazzoli’s bass writing meandered across the ranges of the other instruments — a welcome and unusual invasion into the upper reaches of the violins. In an act of musical camouflage, the bass nestled against a wall of high-pitched violin harmonics. The piece received unusually vibrant applause for a contemporary work set among masters from the previous century.

LACO gave a stunning account of Stravinsky’s Pulcinella Suite. The work, composed as ballet music for Sergei Diaghilev, looks back to the music of 18th-century composer, Giovanni Battista Pergolesi. As LACO’s new conductor Jaime Martín explained to the audience, Stravinsky couldn’t help putting his own stamp on Pergolesi’s work.

The first movement is the truest to the past, as if Stravinsky is laying out his historical source material before manipulating it to fit his own needs. By the second movement, we’re off to the races, and we can hear the strains of Stravinsky’s earlier works. His ballet, Petrushka, seems to course through the veins of this piece.

Martín chose a thoughtful end to the program in Prokofiev’s Symphony No.1 (“Classical”). LACO gave a youthful account of the piece, enthusiastic but nuanced. Muscular jolts in the brass were simultaneously chaotic and measured — a hallmark of good Prokofiev playing. We can imagine that the young composer imagined it this way when he composed the piece. Martín likened the piece’s final movement to opening a large bottle of champagne.

In the bombastic moments, Martín was a burst of thunder on the stage. His LACO tenure is brand new, but he appears to have an instinctive understanding of the ensemble’s sound. He has maintained the flexible and improvisational sound that sets them apart from other ensembles.

This program revealed Martín’s penchant for thoughtful programming. Each of these works was music at a distance — composers making a thoughtful effort to depart from their usual voices. This was a well-designed evening, and the four pieces looked not only to their pasts but also toward each other. LACO is in good hands.

The conductor charms listeners and demonstrates his skill in a concert pairing a Bryce Dessner song cycle with Mozart’s Requiem.