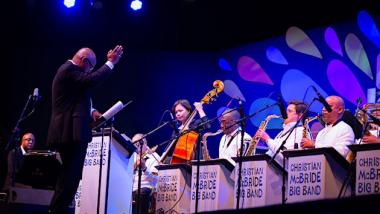 What makes Monterey different than other jazz festivals? There’s the setting, for starters. Largely unchanged since the first festival in 1958, the oak-shaded Monterey County Fairgrounds folds into the landscape. Inviting and unpretentious, the grounds provide plenty of space for four outdoor stages and three indoor venues serving up a continuous, overlapping array of performances. Seeing every act is impossible. Difficult choices must be made.

Longevity also sets it apart. Monterey’s uninterrupted reign makes it the world’s longest continuously running jazz festival. While the proliferation of similar festivals around the world has diluted its influence, the iconic event still plays an outsized role in the jazz ecosystem.

Tim Jackson has been responsible for booking the festival since 1992, taking over after the retirement of founding manager Jimmy Lyons, which means Monterey’s institutional memory provides a sense of continuity stretching back to the Eisenhower era. Running from Sept. 27–29, the 62nd Monterey Jazz Festival exemplified all of the festival’s multifarious strengths and its newfound leadership in programmatic gender equity (meaning there were, for the second year, a conspicuous profusion of women instrumentalists).

But it was a foundational booking pattern that seized my attention this year. Talk to jazz musicians in Montreal or Newport or other locales that host renowned jazz festivals and you’re likely to hear a litany of complaints about the ongoing neglect of artists from the surrounding area. Monterey has always paid close attention to the Bay Area and Los Angeles scenes, showcasing West Coast artists at every career stage, from grizzled veterans and mid-career masters to rising stars. This year was no different.

The first act heard by early festivalgoers on Friday was the duo of persuasively swinging Monterey pianist Eddie Mendenhall and his daughter, 22-year-old bassist Kanoa Mendenhall, a player who is rapidly establishing herself on the New York scene. Camped out on a small outdoor stage in the middle of the fairgrounds’ permanent food court, they played six half-hour sets throughout the weekend, focusing mostly on standards. But Kanoa made her presence felt far beyond the duo. On Saturday, she anchored a pleasingly eclectic set in the Pacific Jazz Café led by Oakland-raised vibraphonist Sasha Berliner, who, like Mendenhall, played in the SFJAZZ High School All-Stars. But it was her unbilled performance in the main arena that provided one of the festival’s most dramatic moments.

Before premiering his festival commission, bassist Christian McBride and his big band warmed up with several surging pieces of post-bop, including a lithe arrangement of Joe Henderson’s “Black Narcissus” featuring the brawny tenor saxophone work of Keith Loftis. Calling Kanoa out to the stage and handing her his bass, McBride conducted the band through his tribute to his late comrade and dear friend, Roy Hargrove. The three-part suite Roy Anthony: The Fearless One evoked the trumpeter’s many moods, with a swaggering hard bop, a pacific ballad section, and some deep RH Factor grooving. Through it all, Kanoa kept the pulse buoyant and supple, her thick, rounded notes providing a pliable foundation for the roaring orchestra. Pressure, what pressure?

Over on the primary outdoor venue, the Garden Stage, Los Angeles pianist Gerald Clayton played an enthralling set with his quartet featuring alto saxophonist Logan Richardson, bassist Joe Sanders, and drummer Kendrick Scott that centered on his deep dive into the Piedmont blues. A little later Friday evening his father, bass master John Clayton, accompanied Diana Krall, a coincidence that highlighted the prevalence of generational connections on the fairgrounds. Parents and their offspring provided a running familial theme throughout the weekend.

Sunday afternoon’s program seriously depleted the Bay Area’s jazz ranks, with the Grammy Award-winning Pacific Mambo Orchestra kicking off the action in the arena, while the Electric Squeezebox Orchestra (ESO) held forth on the Garden Stage. With the powerful vocals of Christelle Durandy (and another appearance by Jeff Cressman), the PMO sounded crisp and authoritative. After a couple songs, I made my way to the Garden Stage, where trumpeter Erik Jekabson’s formidable ESO kicked off with a crackling Darren Johnston arrangement of Sonny Rollins’s “Decision.” Sunday afternoon usually finds the ESO at the band’s weekly California Jazz Conservatory residency, a regular gig that has encouraged bandmembers to contribute a steady flow of new material.

Reed expert Sheldon Brown, holding forth on soprano sax, introduced “Z Type,” a new tune with a celebratory African-market groove that made it clear the Z in question was Weather Report keyboardist/composer Joe Zawinul. Jekabson’s tribute to drummer Shannon Powell, “Gap-Tooth Grin,” evoked a compatriot from his tenure in New Orleans with a traditional Crescent City feel minus the polyphony. Saxophonist Mike Zilber’s hat tip to Joe Henderson, “Hen House,” served as a showcase for the commanding altoist Larry de la Cruz. Vocalist Kalil Wilson joined the band to perform his original ballad “Won’t It Feel Like Heaven,” singing with such smooth and effortless phrasing he makes crooning sound like swooning.

Over in the Pacific Jazz Café, San Francisco bassist Marcus Shelby’s quartet with resurgent tenor saxophonist Teodross Avery played a tribute to tenor sax titan Dexter Gordon. Featuring pianist Adam Shulman and drummer Jaz Sawyer, the band opened with Gordon’s briskly swinging standard “Cheese Cake,” a tune tailormade for Avery’s big, muscular tone and urgent-yet-relaxed feel. For Gordon’s “Soy Califa,” Shelby called up the saxophonist’s widow Maxine Gordon, who had talked about her excellent biography Sophisticated Giant: The Life and Legacy of Dexter Gordon earlier in the day with Angela Davis. A brief discussion between Shelby and Gordon provided some background on the tune’s title, just enough to give a savory taste of Maxine Gordon’s moxie and smarts.

With the temperature dropping and the breeze blowing, not many folks braved the Garden Stage to hear an extraordinary set by Oakland trumpet star Ambrose Akinmusire. Presenting his chamber jazz hip-hop work Origami Harvest, he artfully integrated the strings of Mivos Quartet (who somehow played in tune despite the chill), the dynamic vocals of Kokayi, who can sound like a preacher, a rapper, or a soul frontman, and a taut rhythm section with drummer Justin Brown and keyboardist Sam Harris. Passing by the stage twice on my way to other venues I was drawn in by the kinetic interplay between vocals and strings, and lingered far longer than I’d intended. I experienced enough of the music to know this is a work that should be heard on Bay Area stages.

After my last detour, I ended up back at Jazz Café for the second of two sets by San Francisco pianist Tammy Hall and Oakland bassist Ruth Davies. In an idiosyncratic booking move that just felt right, they explored the spirituals, hymns, and folksongs interpreted by pianist Hank Jones and bassist Charlie Haden on the sublime 2012 album Steal Away. Joined on several pieces by San José tenor saxophonist Kristen Strom, most poignantly on a breathtaking version of Duke Ellington’s “Come Sunday,” the duo rarely strayed far from the original melodies. Hall added her soul-steeped vocal on several pieces, like a slowly gathering version of “Nobody Knows the Trouble I’ve Seen.”

It was fascinating to hear that Hall, an artist who spends much of her time on stage backing great singers, is equally adept at accompanying herself. For an instrumental rendition of “Steal Away to Jesus,” the duo left plenty of space, like a deep breath between each phrase. After so many musical apogees, ending the festival with a becalmed moment of salvific sound seemed to encase the earlier pleasures in a sanctified seal. Engorged with spirit, it was time to head home.

The Day After #MeToo at Monterey Jazz

Women musicians are in forefront of this year’s lineup at the legendary festival.