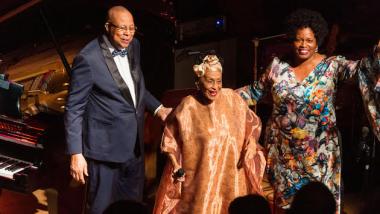 Chucho Valdés makes magic happen. Every moment he was on stage Thursday night at the SFJAZZ Gala in his honor, the music entered a rarified realm where past, present, and future slammed together like atoms in the Hadron Collider. Showering Miner Auditorium with countless elemental particles, Valdés somehow reassembled them into rhythmically charged molecules, vibrations that were sacred and secular, precious and new.

The evening’s only problem was that the most influential figure in Cuban jazz since the 1960s sometimes took a backseat to acts that were more about SJAZZ than the 77-year-old pianist and composer. Like most SFJAZZ multi-act shows, it was a tight and seamless production, and maybe it’s churlish to want Valdés to work more at an event celebrating his lifetime achievements. But he looked hale, hearty, and fully ready to perform all night, judging from the graceful dance moves with which he greeted the chanting percussion procession that opened the proceedings.

The SFJAZZ High School All-Stars showed how to pay tribute to a master with a crackling version of Valdés’s anthem “San Francisco” arranged by bassist Matt Wong (an alumnus of the ensemble). With Valdés joining pianist Hannah Mayer for some four-hand montunos, the band responded with gusto, every call answered with a robust response.

Valdés gave another glimpse into the future with Irakere 45, the latest incarnation of the band that revolutionized Cuban jazz in the 1970s with its synthesis of rock, post-bop, and sacred Afro-Cuban percussion and incantations. Powered by the percussion tandem of Yaroldy Abreu Robles and Dreiser Durruthy Bombalé, the ensemble gave a taste of how Valdés has updated the ensemble’s book with a turbo-charged arrangement of the Irakere classic “Juana 1600.” The band opened a three-day Miner Auditorium run the following night.

After a tremendous buildup of momentum, two numbers by the SFJAZZ Collective derailed the proceedings. Joined by former member Stefon Harris on vibes and Yosvany Terry on alto sax, the band played two pieces by Antonio Carlos Jobim, the current season’s designated composer. Drummer Obed Calvaire’s Cuban-steeped arrangement of “Waters of March” made a little sense thematically, but Harris’s rendition, the Warren Wolf-arranged “How Insensitive,” while rendered with clarity and purpose, seemed entirely out of place.

There are probably lots of good reasons why the Collective didn’t play a piece or two by Valdés, starting with minimal rehearsal time, but why take the focus away from a composer with such a deep and extensive body of work? The detour only highlighted the fact that the evening’s most cathartic, exuberant, and rousing cheer was inspired by a different kind of player.

As has been widely noted, SFJAZZ Founder and Executive Artistic Director Randall Kline’s announcement that Speaker Nancy Pelosi was in the house was greeted by an uproarious standing ovation. After beating the president like a drum in Washington, she’d come to see other master percussionists at work.

The heart and soul of the evening were the most intimate encounters, starting with a breathtaking, spacious duet between Valdés and Dianne Reeves on the standard “My Foolish Heart,” the first time they’d ever performed together (a fellow SFJAZZ resident artistic director, Reeves returns to Miner Auditorium Feb. 21–24).

The new relationship merged with Valdés’s oldest when the 88-year-old vocalist Omara Portuondo joined Reeves and the pianist on “Bésame Mucho.” Looking frail but sounding strong and confident, Portuondo expertly braided her voice around Reeves. She sang her own duet with Valdés on another ubiquitous Latin American standard, “Dos Gardenias,” a song she’s owned since her 1996 recording with the Buena Vista Social Club. The tenderness and affection of Valdés’s accompaniment was all the more striking after watching him play with such force and velocity earlier in the evening.

The concert lurched to a close with British soul singer Corinne Bailey Rae singing her 2006 hit “Put Your Records On” with the Preservation Hall Jazz Band, which was fun but something of a musical non sequitur. The concluding all-hands-on-deck rendition of “Guantanamera” served its purpose as a rousing closer, but ended the evening looking away from Valdés’s music rather than plunging back in. It was another of the evening’s missed opportunities.

Bay Area audiences, however, still have a couple of opportunities to catch Valdés in the coming months, as he’s playing two concerts with saxophone great Joe Lovano at SFJAZZ on March 16.

The jazz diva’s playful concert of SFJAZZ is just what you wished for this season.

One of the region’s most vigorous creative forces continues to evolve and thrive through personnel changes.