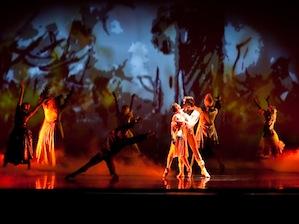 Darya Khokhlova makes an impression just by entering the stage, never mind her (fabulous) performance. The featured ballerina in the Festival del Sole's "An Evening of Dance with Members of the Bolshoi Ballet" looks different from the majority of her peers.

She had her work cut out for her because the choreographer of all three works on the program, Vladimir Vasiliev, is somewhat of a throwback to the Spartacus tradition of the Soviet era: big, splashy, overdramatic, obvious, and yet purblind.

At his worst, Vasiliev set Chopin's Ballade No. 1 — performed brilliantly by Conrad Tao, in the second decade of a concert career that began at age 4 — as a love duet featuring an office chair with wheels, Khokhlova reclining in it, Yan Godovsky whipping it around the stage. I once saw a similar chair being used for Alicia Alonso to "dance" Giselle at 80 and going blind, but what exactly was the justification for this quasi-motorized Chopin?

The evening opened with a surprise. Even though this Dede Wilsey Dance Series has a generous patron — president of the Fine Arts Museums of San Francisco and sponsor of a multitude of good causes — dancers on such occasion are usually featured in solos and pas de deux on a bare stage, with a pianist or two.

But here, in the festival's Lincoln Theater, there was the Russian National Orchestra in the pit, led by former San Francisco Ballet conductor Emil de Cou, and on stage, an opening work of "high production values," with 11 dancers in lavish costumes, against projected sets.

This was Oath of the Ushers, to a score by Gordon Getty, a complex, strange 30-minute work. It is a movement from Getty's Ancestor Suite, the story based on Poe's 1839 The Fall of the House of Usher, about the mysterious destruction of the Ushers' immortality.

In this compressed episode of the story, "Eddie Poe" (not Edgar) visits his friend Roderick Usher and his twin sister Madeline. At the party in his honor, participants include the "spectral ancestors of the Usher line, led by the founder of the Covenant, Lord Primus Usher, who has given them immortality." Madeline, who is "mad but pure, like Ophelia," refuses to sign the Covenant — with tragic consequences for all.

Full disclosure: I got all of this information from reading up on the material after the show, none from the performance. Understanding story ballet rarely requires Mensa membership, but Oath of the Ushers left everyone around me completely lost; I could answer questions of "what was that?" only by asking the same question from others. Normally, there is the hero (in white), the villain (in black), and the girl — no puzzle about Swan Lake, Giselle, etc.

But here, Ivan Alekseev (in white, apparently Roderick), Godovsky (in black, must be "Eddie") mixed with the corps of strangely dressed and weirdly behaving dancers doing ... not sure what. Alekseev is a tall, lanky, strangely laid-back dancer, Godovsky is small, wiry, powerful. Khokhlova was Madeline, spectacularly bringing to life a character the viewer may not understand until after reading the program; she also perished beautifully at the end.

Getty has long concentrated on Ancestor Suite, having The Oath of Ushers movement premiered by the Bolshoi dancers and RNO in 2009, in Moscow, Perm, Voronezh, and Krasnoyarsk. Friday night was the U.S. premiere.

Besides the dancers' performance, the good thing about this dramatic discombobulation is the music, perhaps Getty's best. It begins as gentle circus music, transforming into something reminiscent of Prokofiev ballets, and ending in hesitating, stretched-out phrases. It could work well as abstract music, without reference to Ushers, et.al.

RNO performed the score — well familiar to them — with spirit and commitment. De Cou and the orchestra then laid an egg for the concluding work, with a loud, bombastic performance of Tchaikovsky's Francesca da Rimini, music that demands restraint, not amplification of the excesses already in the work.

Similarly, Vasiliev overindulged in presenting the initially overheated drama from Dante's Inferno about the lovers Francesca (Khokhlova) and Paolo (Alekseev) killed by her husband (Godovsky) — preferring large gestures where a more thoughtful approach would have dictated something intimate and lyrical leading up to the tragic finale.

Just as a century ago, Russian dancers are now being exported in copious numbers, many from the 236-year-old Bolshoi and the 229-year-old Imperial Ballet/Mariinsky/Kirov. Besides Possokhov and Kochetkova, San Francisco Ballet is graced by Gennadi Nedvigen, others in past seasons. American Ballet Theatre's just-concluded season in New York featured five Russian ballerinas among the 10 principals.