In the spring of 2009, Michael Tilson Thomas and the San Francisco Symphony embarked on a series of concerts that explored the connections between Franz Schubert and Alban Berg. Echoes and reverberations of those fine and fascinating programs, presented as a 2 ½–week Dawn to Twilight festival, emerge in Berg, a new MTT-conducted release on SFS Media. 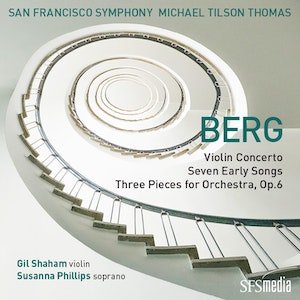 The recording, which offers three works by the early 20th-century master — all of which were heard on the 2009 bill — makes no reference to Schubert or any other composer for that matter. But in both the selection and approach to the Violin Concerto, Seven Early Songs, and Three Pieces for Orchestra, the disc affirms Berg’s affinities with his Romantic predecessors, multiple lieder composers, and such orchestral innovators as Mahler and Berlioz. Perhaps best known for his acid-laced operas Wozzeck and the unfinished Lulu, Berg comes off in this triptych as a composer of musical expansiveness, coruscating expressiveness, and captivating range.

The Violin Concerto, a 12-tone composition that listeners of all stripes can admire and come to adore, comes first. Gil Shaham, who appeared in the 2009 festival, reprises his entrancing solo performance here.

The piece opens, memorably, with a four-note ascending figure on the open strings of the violin: G, D, A, E. Echoed and answered by other instruments (harp, clarinet), it launches the concerto in a way that is both affecting and sightly eerie, as if the violin were somehow speaking in its own, unadulterated voice.

Soon enough, Shaham brings his articulate musical language to bear. In the first of two movements, he turns from tender and quizzical phrasing early on to passages by turns bucolic and big-boned, youthful and darkly haunting. Tilson Thomas and the orchestra partner him beautifully, with rigor, lushness, and colorful details, right down to the blurry unresolved chord that closes the movement. A solo horn’s soft uttering of a folk tune, set off by elaborations of the concerto’s opening figure, has a Mahlerian poignancy.

The second movement reaches new heights, with soloist and ensemble tightly conjoined in a kind of frenzy that is both frantic and precise, like an etching distinguished by both its bold slashing strokes and delicate cross-hatching. Another seraphic interlude arrives with the quotation of a Bach chorale. The piece ends in a kind of interior monologue, as Shaham meanders upward through the 12-tone row, his voice finally silenced in the instrument’s loftiest register.

Concise as they are, running from less than two minutes to just under four apiece, the Seven Early Songs have a striking emotional amplitude. As James M. Keller aptly writes in the liner notes, Brahms, Hugo Wolf, Strauss, and Debussy come to mind through these settings of Carl Hauptmann, Rilke, and others. Schubert lurks in their somewhere as well, along with Schumann, another master of the piercing art song.

Berg lavishes a prismatic assortment of moods and effects on the vocal lines and orchestral texture. “Night” comes on with a shivering voluptuousness. “Song of the Reeds” has the restless energy of a rustling wind. “Ode of Love” rides on its energizing harmonic shifts.

Soprano Susanna Phillips has her finest moment in “Crowned by a Dream.” She rises here, as she does not throughout, with a fervid, immersive performance that feels fully committed. The orchestra is in high gear as well, spinning out a long last chord as a wonder-struck aubade. Too often, however, the ensemble outshines the soloist, who tends to undersell the songs with rather monochrome readings.

Berg ends strongly, with a vivid account of the Three Pieces for Orchestra. From the theatrically guttering flute and percussion at the outset to the near-demonic fury of the work’s closing march, the performance is sure-footed and full-throated. The brasses snarl angrily in the second piece, entitled “Reigen,” before a collective surrender arrives. Caustic percussion gives way to heaving breaths and sighs from the strings in the finale. The music and music-making is in gratifying accord.

Denied, due to the pandemic, the tour and series of Davies Hall concerts that no doubt would have capped his 25-year tenure with glory and great outpourings of community gratitude and affection, Tilson Thomas now bears the honorific title of San Francisco Symphony music director laureate. His many recordings on SFS Media constitute an important record of his legacy. Now, with this latest release, recorded in 2015 and 2018 concerts, another testament to his partnership with the great orchestra he led and fostered joins the list.

Romanticism Through the Looking Glass