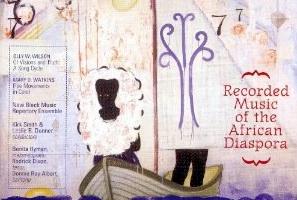 Recorded Music of the African Diaspora is the first release of what promises to be a series in a partnership between Albany Records and the Center for Black Music Research at Columbia College Chicago. Two Bay Area composers are represented, and two styles: conservative filmic versus postmodern eclectic.

The postmodern composition, Of Visions and Truth: A Song Cycle (1991), is by UC Berkley music professor Olly W. Wilson. Its title embeds the central hypocrisy of American history: the visions of equality enshrined in its founding documents versus the tragic reality of slavery, abuse, bigotry, and systematic inequality to people of color. Wilson’s cycle is by far the more striking of the two works on the release, especially so in its concluding number, a setting of If We Must Die, by Claude McKay. In it baritone Donnie Ray Albert and tenor Rodrick Dixon hurl out its text with fascinating counterpacing, ending defiantly on “Like men we’ll face the murderous, cowardly pack/Pressed to the wall, dying, but fighting back!”

Wilson: Of Visions and Truth,
VI. If We Must Die


Wilson’s work, written during the height of postmodernism, combines atonal and tonal elements among familiar quotations, like the songs Hush, Baby and Shortnin’ Bread in the setting of Henry Dumas’ Ikef, the third number in the cycle. His instrumentation is deft; his ideas never outlast their welcome. Of the three vocalists employed, Dixon impresses the most with its searing resonance. While all have fine voices, I was a bit disappointed in the way mezzo-soprano Bonita Hyman tended to swallow her text in overpronounced vowels.

Oakland resident Mary D. Watkins, by contrast, offers a fairly nondescript tonal style, some of which sounds like it should be accompanying a documentary rather than leading the way on its own. (Watkins has written a number of documentary scores.) She describes her orchestral suite Five Movement in Color (1994) as an “epochal painting or poem about our journey as a [black] people in this country.” Its first movement suggests African roots; the second, the African-American “soul”; the third, the contributions of jazz; the last two suggest aspects of urban angst before returning to the ancestral drums of the work’s beginning. Watkins has a lot of experience in jazz ensembles: This helps make the third movement the most attractive of the five, all accurately rendered by the New Black Music Repertory Ensemble conducted by Leslie B. Dunner.

This series starter can be strongly recommended for the Wilson song cycle. Watkins' suite is less profound, but some of its jazz licks and its African polyrhythms may cling on to you for a while afterward.