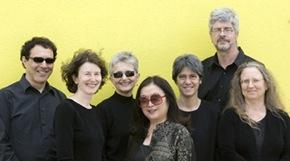 Jules Langert on February 11, 2010
Earplay’s 25th season of concerts began Monday with a program at Herbst Theatre featuring works by composers who have a Bay Area connection, past or present. The opening selection was Mexican-born Carlos Sanchez-Gutierrez’ provocatively titled and of course, Henry the Horse (2006), a collection of four short, attractive pieces scored for clarinets, violin, and piano duet. Each of the pieces “pays homage to, and is a commentary on, a contemporary work of art.”

Even with the descriptive program notes, it wasn’t easy to grasp the relationship, though the music held up perfectly well on its own. In Genghis, the intense first piece, brief motives crowd their way forward, to be quickly developed and realigned before the music abruptly stops. The last piece, Things that go, picks up some of this initial energy, ending the work brightly on a solid, emphatic downbeat. The quiet, thoughtful second piece, Mandala Tequila, refers to a construction by Mexican artist Iván Puig, in which a mallet rotates around a circle of tequila bottles, forming patterns of light, sound, and motion.

The composer creates his own musical equivalent with a slow, revolving, largely repetitive arc of single notes centered in the piano and radiating out to the other instruments. The result is effective as a kind of circling mobile in sound, but it goes on longer than its simple, static nature seems to warrant. Sanchez-Gutierrez taught at San Francisco State University for several years before moving to the Eastman School in 2003.

Seymour Shifrin was on the faculty of UC Berkeley in the 1950s and ’60s. His brief, compact, thoroughly engrossing piece The Modern Temper (1959), for piano duet, began the second half of the program. Played crisply and with verve by Karen Rosenak and Michael Seth Orland, the work is a study in terse, highly dissonant tone clusters that jostle and rub against each other until a sudden full stop allows a tentative, highly disjunct, slowly evolving melodic line to gradually take shape. When the clusters return, bigger and more assertive than before, they lead to a powerfully sonorous conclusion.

Bruce Christian Bennett currently teaches at San Francisco State, and studied at both UC Berkeley and the San Francisco Conservatory. His piece From the Ashes (2005) was the program’s final work. Scored for flute/piccolo, clarinet/bass clarinet, violin, viola, cello, piano, and percussion, it was conducted by Mary Chun, and was the longest, most elaborate work of the evening. Episodes of frenzied activity alternating with extensive passages of neutral, affectless calm soon became a predictable pathway for the music, which remained constant throughout the work’s 23 minutes’ duration.

Periodically, a chordal rallying cry from the piano and percussion roused the ensemble to action, though it subsided tamely and too quickly for anything transformative to occur in the music. At one point the string trio took the lead, and elsewhere percussionist Chris Froh had a prolonged tussle with a large tam-tam, to questionable effect. More counterpoint and less undifferentiated tranquility might have helped the process along.

Sam Nichols, who teaches at UC Davis, composed his work The Unnamed, Jr. (2010) for clarinet, violin, and piano as an outgrowth of a chamber opera in progress (titled The Unnamed). In a single movement lasting about 10 minutes, the piece represents what the composer calls “a kind of holding pen for all of the melodic, harmonic, textural, gestural, and dramatic ideas that have been emerging as I think about the opera.” Perhaps for that reason, the work seemed a little vague and abstract, and surprisingly, not at all dramatic, at least to me.

Finnish composer Kaija Saahiro’s Je Sens un deuxieme coeur (2003) for viola, cello, and piano also began as an extension of her opera Adriana Mater, but soon, she says, took on a life of its own. The title of this fairly extensive, five-movement work refers to “the two hearts beating within a pregnant woman’s body,” and their “constantly changing rhythmic polyphony.” I must admit that I was unable to detect any of this in the music, which seemed more reliant on mood and affect than on any substantial musical ideas. Perhaps this kind of beauty is more attuned to the opera stage than to the concert hall. Still, a second hearing might show me what I may have missed the first time around.