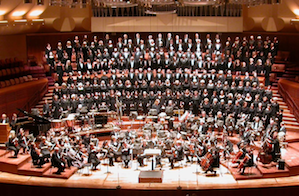 Two hundred amateurs took possession of Davies Symphony Hall on Friday night in San Francisco, as the San Francisco Choral Society sang Brahms’ powerful German Requiem under the baton of Robert Geary. I use amateurs in its original sense: lovers, in this case lovers of music. These everyday San Franciscans, musical moonlighters, came together and, through their passion (and careful preparation) produced something extraordinary.

Instead of setting a traditional Latin Requiem, and writing in the wake of his mother’s death, Brahms created a libretto drawn from Martin Luther’s translation of the Bible, concentrating on words of comfort and blessing. “Blessed are they who mourn, for they shall be comforted,” from the Beatitudes (in the Gospel of Matthew), are its first words. No harrowing visions of eternal punishment. Just the assurance that the good we do will remain in memory.

There are more women than men in this chorus, a situation in which changes in dynamics can be a challenge and good balance is hard to achieve. The challenge was well met in this performance. When, for example Brahms starts the phrase “all flesh is as grass” in the opening of the second movement starts with the three lower voice types, he marks it “piano,” then adds the sopranos, but without a swell in volume. It’s hard to add the bountiful soprano section of the Choral Society and still respect the marking in the score, but they managed it. Later the phrase comes back for everybody, and marked “forte.” The men let loose, and the sopranos matched them but didn’t overwhelm them.

Eugene Brancoveanu was the baritone soloist, ideal for this Requiem. His voice, strong and warm, exudes the qualities of the texts Brahms chose. He pointed the important words, when exchanging passages with the 200 chorus singers, making each passage important verbally and musically.

Marnie Breckenridge sang the consoling soprano solo, “You are now sad, but I have found comfort and will see you again.” She had memorized her part and discarded her score, and her solo assumed more of an operatic character, which was a mistake. Breckenridge’s sound was more operatic than consoling and she lost the sense of having a conversation with the chorus. And some passages needed more flexibility and rubato.

A pick-up orchestra identified as the California Chamber Symphony, although giving some evidence of being under-rehearsed, gave welcome support to the singers. The chorus ended the Requiem strongly, mastering the complex counterpoint in “Thou art worthy, Lord,” and pouring out the heartfelt chorus, “Blessed are the dead” with power.

The program began with the short Nänie, Brahms’ setting of a poem by Schiller, on themes of the beauty and the transience of life. That provided an aperitif for the Requiem, and an opportunity to seat latecomers. There were occasional ragged entrances in both orchestra and chorus, but the performance was well worth hearing.