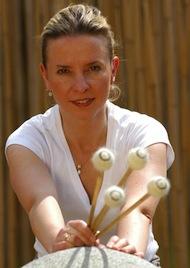 Myćka’s Mallets Mix It Up in Marimba Bash

The marimba is coming! This mellow-sounding cousin of the xylophone has been heard with Symphony Silicon Valley in recent years in works by David Amram and Avner Dorman. On Friday the San Jose Chamber Music Society brought it to Le Petit Trianon in a concert featuring quintets for marimba and strings.

If that sounds like an odd ensemble, remember that quintets for piano and strings are common, and the piano, as SJCMS Artistic Director Ted Lorraine reminded us in a preconcert interview, is also a percussion instrument — though admittedly it works a little differently.

On Friday, the mallets — two of them in each hand, held hinged so that their heads could easily flip from close together to far apart — were wielded by Polish marimba virtuoso Katarzyna Myćka. A small woman in a sparkly vest, she roamed along the vast expanse of the instrument with ease and confidence. The accompanying string quartet, her regular collaborator in this repertoire, is the Mandelring Quartet from Germany. And the marimba, a five-octave monster, belongs to San José State University’s music department, so it’s probably one of the instruments heard with SSV, as well.

Despite its imposing size, the marimba is easily disassembled for moves. (Myćka told us that she regularly takes her own marimba from home in her car for gigs all over Germany.)

Both the main works she played were titled Concerto for Marimba and Strings and were apparently written for accompaniment with string orchestra. They worked perfectly well as chamber music. The one by the French composer Emmanuel Séjourné is more like a traditional concerto, featuring long passages for marimba alone and for quartet alone before combining them, having them play the same melody together, or having the quartet provide jazzy accompaniment to the marimba’s melodies.

Myćka and the quartet offered a smooth, flowing performance.

Séjourné uses the marimba primarily for simple melody, and is conscientious about covering the entire range of the instrument. His concerto has two movements, one slow and one fast. The curious thing about marimba music, though, is that there isn’t much difference between fast and slow notes. The marimba sound decays quickly, so the player has to beat the keys constantly, at the very least in a tremolo-style roll, regardless of the speed of the music.

The concerto by the Brazilian composer Ney Rosauro is a more familiar piece — percussion superstar Evelyn Glennie plays it on occasion — and more colorful to listen to. It’s a genuine collaboration between marimba and strings rather than a formalized concerto, with much exchanging of leads and shifting balance among the instruments. Although Rosauro’s style is as tonal as Séjourné’s, he offers more dissonance and greater imagination. His marimba plays a hushed pianissimo (gentle rain as the mallets patter quickly on the keys) and the most obvious special effect for the instrument: a glissando (simply running the mallet down the keys). The strings, too, get the opportunity to play some special effects in the slow movement: harmonics and ponticello. Myćka and the quartet offered a smooth, flowing performance, even in the jumpy, disjointed outer movements.

The ending, in particular, was a beautiful array of finely judged tone colors.

The concert’s encore was one more marimba quintet, a lively Argentine tango.

The Maldelring Quartet is well-suited, sonically, for collaboration with a marimbist. First violinist Sebastian Schmidt has a distinctively smooth, mellow, almost soapy tone that’s perhaps the closest thing a string instrument can offer to the marimba sound. He displayed this tone also in Mendelssohn’s Quartet in D Major, Op. 44, No. 1, one of the two older string quartets from the standard repertoire that were offered to enlarge the program and vary the mood. This was a cool-toned performance that cruised through the work with calm seas and a prosperous voyage (to borrow a Mendelssohn title). Schmidt was prominent in the lead; the other performers — his brother Bernhard on cello, violist Roland Glassl, and second violinist Christoph Schickedanz (temporarily replacing the Schmidt brothers’ sister Nanette, who’s out on maternity leave) — gave rhythmic emphasis in their accompaniment, especially in lyric passages.

The remaining work on the program was Debussy’s Quartet in G Minor. Here the performers switched tactics, playing with a light, buzzing sound that gently skated over the impact of Debussy’s advanced harmonies. Ted Lorraine had asked in the preconcert interview whether there was any resemblance between the marimba works and the gamelan-inspired writing in Debussy’s scherzo. Sebastian Schmidt professed ignorance of this inspiration, and the performers played accordingly. Their scherzo was gentle and contemplative rather than aggressively colorful, by contrast with the Rosauro. Debussy’s slow movement fared well in a similar approach; the ending, in particular, was a beautiful array of finely judged tone colors. Violist Glassl had some outstandingly forthright passages in both movements.