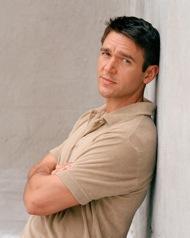 Nathan Gunn, Out of the Comfort Zone

Jason Victor Serinus on January 13, 2010
The exceptionally fine baritone Nathan Gunn was at Herbst Theatre last Tuesday, where he tackled Schubert’s song cycle Die schöne Müllerin (The fair maid of the mill) in a recital for San Francisco Performances. If Gunn, who was accompanied by his wife, Julie Gunn, failed to score an interpretive touchdown, perhaps it’s because he was unsure where the goalposts were.

Singing all 20 songs without break, Gunn failed to convey the minidrama of the lovelorn youth. The missteps began with a dark-voiced, ponderous rendition of “Das Wandern” (Wandering). “To wander is the miller’s delight,” he sang in a voice that displayed nary a trace of lightness or bounce. In the fourth verse, in which “They join in the merry dance / And seek to move still faster,” nothing sounded remotely merry. And the performance only became more plodding in the final verse, where the word “delight” (Lust) is emphasized.

Often, Gunn's interpretation left his audience in the dark. The diction was exceedingly clear, even if the accent was inauthentic. But the meaning behind the words was at best hinted at. Whatever the young miller was feeling was not about to be revealed. The fourth song, “Danksagung an den Bach” (Thanksgiving to the brook), sounded prosaic, the interpretation going no farther than the notes.

Gunn's tone expressed the rugged virility of Britten’s Billy Budd, for whom his voice is quintessentially suited. But by the millstream, as an exceptionally sensitive lad who kills himself when his young maid fancies another, he did not convince.

“Der Neugierige” (The inquisitive one) is one of the cycle's great test pieces. An artist can approach it with simplicity, even naivete; singers may interject suggestions of the suicidal sadness to come. The Gunns performed the first four lines as if each were a separate thought, repeatedly stopping the music's energetic flow. Nor did it help, as the singer began the great, heart-tugging melody “O Bächlein meiner Liebe” (O brook of my love), to prolong the O as if launching into a refrain.

Not all was as bleak as the miller’s fate, however. In “Morgengruß” (Morning greeting), Gunn employed his irresistibly seductive bedroom voice to great effect. It resurfaced at the end of “Mit dem grünen Lautenbande” (With the lute’s green ribbon), where our salty miller could have seduced a stone.

Also superb was the intimate tenderness of the last verse of “Die böse Farbe” (The loathsome color), and Gunn's sweet questioning to the withered flowers in the subsequent song. By contrast, his rugged tone was ideal for “Der Jäger” (The huntsman). But when he arbitrarily slowed down in “Eifersucht und Stolz” (Jealousy and pride), and failed to open his voice on highs, the singing and accompaniment again became ponderous. Nor was forcefully punching out top notes in the later songs convincing.

Julie Gunn made the most of the death knell in “Die liebe Farbe,” weighing in on each repetition throughout the first verse. But her insistent overemphasis, much like her husband’s tendency to underscore certain words, seemed to shout, “This is important, listen up!” Elsewhere, the accompaniment was more dutiful than illuminating.

The last two songs, in which the miller and brook engage in dialogue as the young man embraces death and the brook sings a valedictory lullaby, is crucial to the cycle’s impact. In both, inflections seemed arbitrary, as if the Gunns' were more intent on varying stanzas than expressing deep, overpowering grief. The self-conscious interjection of staccato in the piano line of the penultimate stanza of the last song, and the extension of the last note as if to say, “This is the end,” made no emotional sense. The Gunn's miller died of grief without ever touching this listener's heart.