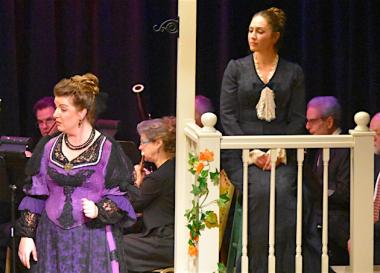 A Neglected Smetana Opera Gets New Life at Pocket Opera

Bedřich Smetana’s opera The Two Widows is like the Czech dessert called Bublanina — a dessert that bubbles up in the oven, with dark-purple plums cooking contentedly in a sweet batter. Written at a time of crisis in the composer’s life, just before his devastating deafness set in, this little-known piece deals with the tarter tastes of life with the lightest touch imaginable. Yes, there is death — the two principals are recently widowed — and obsessions — the male principals include a suitor whose passion is a little over the top and a grumbly gamekeeper who hates everything pleasant. There is a hint of adulterous passion.

But Smetana doles out a generous helping of good will and properly bubbly song, and all comes out well in the end.

The joy is in the music, and in Pocket Opera’s production of The Two Widows the music carried the day. The 10-person onstage orchestra was expertly led from the piano by Frank Johnson, the show's music director. Tempos were sprightly and the ensemble was tight; special kudos to first violinist Yasushi Ogura for his leadership. Unfortunately, the excellent woodwind playing was swallowed up acoustically by thick velvet stage curtains hanging behind the players at Berkeley’s Hillside Club — where the most was made of a tiny stage.

The action takes place at a forest estate in Bohemia, where one of the widows, Karolina, is happy to be newly in charge of her life. Far from sad (though dressed in black), Karolina starts the opera with an exuberant ode to the freedom of widowhood, and it is that spirit of liberation that energizes the rest of the comedy.

Unlike Karolina, her cousin Anežka wears her widow’s mourning in earnest, having sworn fidelity to her husband’s memory. But she has an ardent suitor, Ladislav, and it’s obvious to everyone that she would love nothing better than to marry him. But she’s not ready — yet.

The work of the opera — and of cousin Karolina — is to make that marriage happen. Suffice it to say here that the plot works out and that eventually both widows change out of their black dresses. The details are a bit absurd, but never mind.

Soprano Lindsay Roush sang the lead role of Karolina with agility and accuracy, even in the rapid-fire patter-songs. Fully at ease in high notes, Roush also has a gorgeous middle range — as well as a splendid comic talent.

Jaime Korkos brought out the complexity of the mourning widow Anežka, the most interesting character in the opera. Korkos’s winning and beautifully balanced voice delivered her long and varied solo scene in Act Two, a passionate introspection that reminded me of Tatyana’s letter scene in Tchaikovsky’s Eugene Onegin — written shortly after Two Widows.

Tenor Justin Brunette sang the role of Ladislav with ardent romanticism, accompanied by a warm smile; his tender second-act aria about the beauties of spring was particularly moving. The bumbling gamekeeper was played by Larry Venza with broad comic strokes, though his voice lacked focus.

The four principals had several intricate quartets, much in the Mozart style, some of them with daunting patter-song moments, sung with commendable ensemble.

Two smaller, servant roles — in love with each other, of course — were nicely handled by soprano Nicole Lopez-Hagan and tenor Jackson Beaman. Four nonsinging dancers, in fetching Bohemian costume, used the Hillside Club’s tiny stage to best advantage; the polka that ended the opera was spirited and infectiously happy. A small vocal ensemble of peasants and a children’s chorus — all splendidly costumed — added visual and musical joy to the comedy.

Like all of Pocket Opera’s productions, The Two Widows was sung in English, in a new translation by founding director Donald Pippin. Occasionally, the words get a little thick for the singers, but for the most part, it’s well worth having witty rhymes like “Don’t be a scaredy; / Remember, we’re not in Verdi” and timely comments like Karolina’s “throw the rascals out of office” (sung to an extended cadenza in case we missed it the first time).

The Two Widows is not the equal of Smetana’s beloved Bartered Bride, but it is worth hearing, and I could hardly imagine a nicer way to revive it than Pocket Opera’s elegant and economical production.