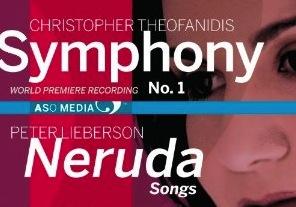 Those who envision a typical America as big and brash, can-do, no-nonsense, powerful, mostly optimistic, energetic — and not too thoughtful or profound — should acclaim ’ latest release, on ASO Media, as an exemplary candidate for the Great American Symphony of the new century. Dallas-born Theofanidis is a terrific orchestrator of the John Williams stamp and a lover of the big-band sound of composers like Ron Nelson or David Maslanka. Listeners will find his Texas toast of a Symphony No. 1 an instantly engaging experience, and this recording cut out to demonstrate razzle-dazzle stereo systems.

Listen, for example, to the first movement excerpt, where Theofanidis turns the Atlanta Symphony Orchestra into a giant bagpipe. Or to the catchy-splashy earworm of a tune in the second movement. Finally, gallop along to the cinematic, cavalry-charge attack in the finale. Throughout, the music will keep you upright in your seat and as happy as if you’d just watched another Bourne Identity action flick. Whether you’ll want to immerse yourself in further hearings, however, is a matter of taste.

There are a couple of unusual things about the symphony. There is no actual slow movement; all have fast passages. Contrast is achieved more commonly with dynamics and orchestration rather than tempo. (I am reminded of Hayden Wayne’s “Funk” Symphony No. 4, with its four Allegro movements.). Also, the finale, following three basically upbeat movements, is, as described by the composer, “dark and monolithic.” Contrary to marketing information, which has seized on this to declare that the piece reflects “momentous personal crises,” the composer has assured me there was no crisis whatsoever: He was thinking of the symphony “in Mahlerian terms, as a kind of world” with a “great breadth of human emotion.” As he put it, “The two outer movements are really mirrors of each other, both in material and emotional magnitude.... It was a structural decision; I was trying to create some sense of balance in the weight of the work.”

Also on the CD is a recording of some of the most beautiful and affecting lyrics ever set to music, the late Peter Lieberson’s Neruda Songs. It distresses me to not recommend this version, because mezzo-soprano Kelley O’Conner’s interpretation of the music is utterly faithful to the composer’s intentions, her voice is fine, and she has done a magnificent job of keeping these songs alive in nationwide performances. I have interviewed her and heard her sing live, and was greatly impressed with her commitment, performance abilities, and professionalism. For a recording of this heart-stopping music, though, the recording by its dedicatee, Lorraine Hunt Lieberson, with James Levine and the Boston Symphony, remains indispensable — and sufficient, since O’Conner’s complete fidelity to the original adds nothing new. Furthermore, her voice is recorded in a more distant mode, contrary to the immediacy and intimacy of Neruda’s love poems that are fully realized in the original Nonesuch release.

This issue by the Atlanta Symphony organization, effectively conducted by Robert Spano, is definitely worth investigating if you’re searching for the Great American Symphony. Does Theofanidis, winner of the Masterprize award in audience satisfaction, fit the bill? Decide for yourself. For the Lieberson songs, it’s a shame: They are too great a contrast with the Theofanidis in almost every respect, and just can’t match the competition, which is pretty close to perfection. Another selection should have filled out the issue, but O’Connor’s excellent performance will help you realize what a fine piece the Neruda Songs are, and whet your appetite for its definitive recording.