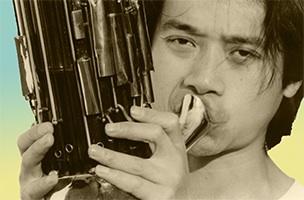 New Baton Whipping Up the Parade

As I stood in the deserted Civic Center station with only three others from the full house that had vociferously cheered the Saturday concert of the Los Angeles Philharmonic and its 28-year-old new music-director, Gustavo Dudamel, I reflected on L.A.’s love for the automobile. Is Dudamel the city’s new Ferrari, or is he just the winning float in the Rose Bowl parade, bestowed with colorful petals and dancing girls who obscure the true vehicle underneath, be it Corvette, Scion, or Edsel?

From the petal perspective, Dudamel has a lot going for him. He seems teddy-bear huggable, with fluid, embracing gestures; a preference for finger work; and palpable enthusiasm for his craft. Philharmonic faces revealed a real joy in music-making among many of the performers, indicating that Dudamel’s zest and passion is contagious. The numerous patrons I asked about him all seemed thrilled to have him as their music director, while recognizing Esa-Pekka Salonen’s achievement in building the orchestra and repertoire into what it is today. They were unstinting in their appreciation, giving him a rousing ovation long before he first lifted his baton, an accolade richly deserved in acknowledging his meteoric rise to prominence by achieving spectacular results with the Venezuelan Youth Orchestra.

Going deeper, however, into the nuts and bolts of conducting technique and interpretation, it seems to me that Dudamel has opportunities for improvement. His range of gestures, while acceptable, could use more variety. His two most obvious interpretive signatures — climactic acceleration and dynamic reticence — are overused and need to be tempered with additional strategies. They are nonetheless fairly novel and deserve a more detailed description.

The first distinctive approach involves a common habit among younger conductors: increasing tempos above the conventional pace. Doing so can add excitement, even awe, among listeners. But, needless to say, the music can become more difficult to play and thus error-prone. If the practice is applied injudiciously, composer intentions may be subverted or balances thrown off-kilter. Unlike less-inventive practitioners, Dudamel does not simply jack up the metronome across the board, but only does so during climactic sections. Sometimes he takes previous sections a bit more slowly, to heighten the accelerative effect. And, fortunately, his inspired orchestra flawlessly kept pace with any tempo change.

Second, Dudamel takes advantage of the pin-dropping sensitivity of the Walt Disney Hall acoustics. Not only does he make quiet passages ultraquiet at times, he suppresses the dynamics a bit in loud passages. This makes the few undampened loud passages all the more overwhelming.

Saturday’s program provided a splendid laboratory for experimentation in the above techniques, with Mahler’s First Symphony. There are many climaxes — so many that the acceleration technique threatened to become a mannerism, as well as deprive listeners who wish to wallow in the climaxes the full quota of pleasure time. Dudamel should consider drawing out the climaxes from time to time, rather than contracting them — an approach used successfully by Michael Tilson Thomas for Mahler here in San Francisco.

Dudamel’s withholding of maximum volume had the most deleterious effect in the first movement. With hardly any full-blown fortissimos until the final climax, the movement’s symmetry was thrown off, making it seem like it was ending too soon. Thankfully, the reticence was applied less frequently in subsequent movements. The stops were certainly let out in the last movement, a factor in bringing the audience instantly to its feet.

I credit Dudamel for trying new things, even if they’re not always successful. The most salient example was the opening of the second movement. Far slower than usual, with almost absurdly emphasized downbeats (no accents exist in the score), the opening sounded more like the giants’ entrance in Wagner’s Rheingold. Better luck next time.

The program began with Unsuk Chin’s concerto for sheng. Named Šu (Shu), after the Egyptian god of sky or air, and scheduled in place of John Adams’ City Noir, which was played only for Wednesday’s opening gala, the concerto features the Chinese mouth organ, an elaborate harmonica-sounding instrument that when played looks like a pineapple being handed over at a fruit stand.

As far as I could tell in this curiosity, which was receiving its first U.S. performance, Dudamel’s conducting was exemplary, and soloist Wu Wei displayed complete mastery over his instrument. Like the harmonica, it can be played both by inhaling and by exhaling, leading to an effective climax at the conclusion where Wei alternately sucks and blows, hyperventilating at an ever-increasing rate. Chin’s orchestration was lightly percussive, deft, varied, and appropriately subordinate to the one-man show at the front of the stage.

With his winning musical personality and willingness to take risks, not to mention his commitment to the music of Latin America and other cultures, Gustavo Dudamel is certain to bring much to his new musical home as he matures. Perhaps he will emerge from the float as a Bernsteinmobile or, more likely, as a vehicle of wonder that has never been seen before.