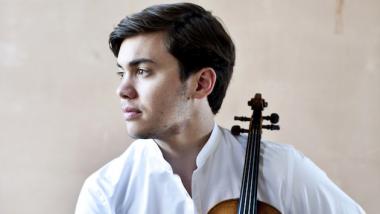 The New Century Chamber Orchestra, led by guest concertmaster Benjamin Beilman, offered an imaginative program last week of five string ensemble works from as many different centuries. All of it was music of bustling energy well suited to the group’s style. I heard the performance on Friday, November 10, at the Oshman Family Jewish Community Center in Palo Alto.

The earliest work on the program, Heinrich Ignaz Franz von Biber’s Battalia (1673) is one of the silliest pieces of pre-20th-century classical music. There’s cacophonous dissonance as the strings represent soldiers singing drunkenly before the battle, snap pizzicato impressively impersonating musket fire during the fighting, and a drooping, out-of-tune lament afterwards. All this comes within the context of deliberately clunky standard Baroque style. The orchestra took it earnestly but vivaciously.

On to J.S. Bach’s Violin Concerto in E Major, an impressively expressive performance with subtle variations in dynamics and eloquent phrasing. Beilman took the solo part, leading the ensemble at times and handing it over to associate concertmaster Dawn Harms for the rest. Though capable of playing boldly, Beilman adjusted himself to the work and the tiny venue with a modest, even hushed or swallowed sound, as if commenting in asides on the themes of the orchestra. This was in the spirit of the solo work of past NCCO music director Nadja Salerno-Sonnenberg, though without her distinctive sonorities. That air contributed to a light, scampering take on Bach.

For a 19th-century offering, Beethoven’s String Quartet in F Minor, Op. 95, would have been a good choice for this program even if it weren’t the only one of his quartets that Gustav Mahler arranged for string orchestra. It’s the fiercest and most condensed of the Beethoven set. Lacking a real slow movement (the second movement is marked Allegretto ma non troppo), it’s pretty much devoid of romantic sentiment. Its hard-edged energy fit well here.

Still, Op. 95 sounds entirely different coming from an orchestra, even a small one, than from a quartet. Many performances are inward-looking and full of growling. That would be impossible here. Even four or five players per part smoothed the sound out and gave it a big, open cast. Even in such a private quartet, Beethoven thinks large-scale thoughts, and this one worked as a string symphony

The two more recent compositions turned back to the neo-Baroque. Stravinsky’s Concerto in D for strings (1946), also called the “Basel” or “Basler Concerto,” is a busy little piece with a typically Stravinskian dryness of tone, but it’s much less prickly than many of his works. Crispness was offset with swooping lyricism, equivalent to what the orchestra did with Bach. The Arioso middle movement was a liquid dance, while the closing Rondo was a moto perpetuo played with such lightness that it never ground down into the mechanical.

This technique came in handy in the newest work, Andrew Norman’s Gran Turismo for eight solo violins (2007), which the players performed standing in the usual octet U-shape. Norman’s idiom could be seen as a latter-day dotted-line extrapolation from Stravinsky’s: oscillating moto perpetuo with broader phrases lain on top and occasional breaks, all at a constant level of light dissonance.

The NCCO played all this in its characteristic clean and refined style, leaving an impression of grace and beauty throughout. Several solos by principal violist Anna Kruger were particularly notable, and Beilman was a welcome addition to the cast. Only some of Beethoven’s more tortured contortions seemed to give the players any technical trouble. The orchestra also defeated the often extremely dodgy acoustics of Oshman’s Schultz Cultural Arts Hall, filling this small, almost cubical space with a consistently bright and clear sound, less resonant but also less blurry than in its past Palo Alto home, the First United Methodist Church. It should do well here.