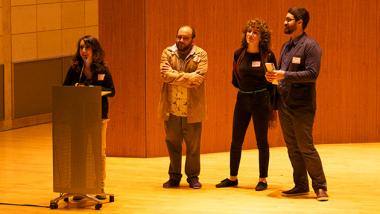 Halfway through the month of January, the San Francisco Conservatory of Music ushered in the new year by hosting the inaugural New Music Gathering. The ‘New’ referred more to the gathering itself than to the actual music. That is saying a lot, considering the breadth of sound and noise that filled the halls of the San Francisco Conservatory of Music  during the three-day conference last month.

But while the sonic environment represented a wide cross-section of artists and styles, it was the warm comradeship and spirit of inclusivity of the Gathering that left a lasting impression.

In the organized discussions that peppered the NMG schedule, democracy reigned. For a panel on women in new music, upwards of 75 people crammed into a small classroom – most sitting on the floor. Conductors, performers, and students all had an opportunity to voice their own story or suggestion to the group. At the end of the hour, the conversation was in full swing, and people crowded into the hallway to continue the discussion, the panelists promising to start a Facebook thread on the topic. The open discussion on next year’s NMG was only loosely curated by co-founder Daniel Felsenfeld, who took comments one after another, ceding the floor to anyone with a raised hand. Divisions between performers, students, and enthusiasts dissolved.

The nightly marathon concerts at the NMG were just as eclectic as the panel discussions. Among the artists who took the stage, Volti stood out not only for being the only a capella choral ensemble, but also for their flawless execution. Under the direction of Robert Geary, the San Francisco-based group provided a balanced sampling of the many projects in which they are currently involved. In Effortlessly, Love flows, by Aaron Jay Kernis, the 20 singers nailed the work’s cluster chords with crystalline intonation.

Among the artists who took the stage, Volti stood out not only for being the only a capella choral ensemble, but also for their flawless execution.The performers also had an opportunity to show-off their “non-sung” techniques in “Dawn,” the first of a three-part set written by Mark Winges that will be premiered this coming May. This retelling of the Pandora’s Box myth includes frantic whispering and buzzing which, along with the playful text (“What to do with a gift from an angry God? - Don’t open it!”), showcased the ensemble’s rhythmic precision and wit.

Most of the music at the NMG was not vocal, though, with “electronics” being the most common instrument in the programs. Eve Beglarian was a fine example of electro-acoustic new music in miniature. Her three-song set from The River Project featured electronics, vocals, recorded sound, a violin, and an electric guitar.

Each of Beglarian’s songs was a little tableau that fleshed-out a single moment or sensation. This post-minimalist music had an unconventional charm matched by the brief, quirky introductions given before each of the numbers.

The artist’s second piece of the night featured the ostinato rhythm of leaky plumbing she heard in the ladies’ room at the Beijing Conservatory. Impressed with its unexpected beauty, Beglarian recorded and looped the sound, and atop this rhythmic carpet of malfunctioning pipes she added a simple electric guitar accompaniment, melodic violin line, and staccato vocals on solfege syllables. The resulting major-chord harmony shared a spiritual aura, sparse and soothing, with the music of Arvo Pärt.

Beglarian is a savvy curator; with all of new and old technology available, she distills her instrumentation and computer components to create crisp, emotionally powerful soundscapes. Her music represents the best of what new music has to offer.

What began as a Facebook conversation in winter 2013-14 between Matt Marks and Danny Felsenfeld, two Brooklyn-based musicians, turned quickly into an idea for a conference that would take place “two or three years” down the road. But once Lainie Fefferman, Mary Kouyoumdjian, and, crucially, MaryClare Brzytwa got involved, the NMG became an imminent possibility. Brzytwa, an employee at SFCM, approached SFCM President David Stull, who consented immediately to hosting the conference.

The SFCM staff provided a seamless framework upon which the artistic side of the Gathering could fulfil, and even outperform, the vision of its creators. The four young co-founders wanted a highly professional conference that had no pretensions or separations between performers. composers, and consumers of new music. Specifically, Marks wanted to avoid “an environment that resembles a gun-show.” No artist was allowed to sell records; nothing was commercialized. Artists and enthusiasts traded in ideas only, and any interested person (with $70) was welcome.

The four young co-founders wanted a highly professional conference that had no pretensions or separations between performers. composers, and consumers of new music.With multiple events occuring simultaneously, there was simply too much at the NMG for a single person to see. Still, the jam-packed 72 hours demonstrated  a spirit of inclusivity and tolerance for experimentation. Referring to the overabundance of activites at the conference, one attendee commented, “It’s all meat!” And President Stull, in his on-stage remarks before Friday evening’s concert, deftly observed that older classical music institutions that honor the canon of Western art music should never overlook the impetus that created those masterworks: a spirit of innovation.