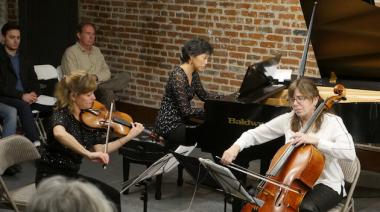 It’s not unusual for new music to fly under the radar, but Tuesday Evenings at Monk Space takes that to another level. The monthly concert series (founded in 2013) takes place in a tiny space in Koreatown that feels like a converted garage, all exposed brick and I-beams. When not being used as a concert venue, the space functions as a production stage for shooting film, video, webisodes, and photography. It is also used for art shows, theater, and private events.

Its profile is so low that, when I arrived, even the musicians were having trouble finding the entrance. There is no sign, just a white door with a keypad at 44414 West Second Street.

Nevertheless, an enthusiastic crowd of about 80 filled the folding seats to hear a program by the Sakura Cello Quintet and the Mojave Trio that combined works by Jennifer Higdon, Nico Muhly, Kaija Saariaho, and Thomas Kotcheff with a pair of world premieres by Daniel Silliman and Daniel Allas.

The salon-sized Monk Space creates a connection between audience and players. At times, more space would have better served the music, giving it room to expand, breathe and blend. That said, the intensity of the performances and the quality of the musicianship were captivating at close range.

The two, short world premieres on the program—­ Daniel Silliman’s the wounded king, and Daniel Allas’s a dream in my throat — were performed by the five members of Sakura: Michael Kaufman, Benjamin Lash, Gabriel Martins, Yoshika Masuda and Peter Myers. They proved as similar as the first names of their composers.

Both works are icy cold, minimalist soundscapes that ever so slowly evolve from low grumbles (like subterranean tectonic shifts), to exchanges of high pitched twittering. It may be all about form and concept, but their infatuation with music as ambient sonic atmosphere left me cold, despite the intensely focused performances.

The concert opened on a decidedly sunnier note with the Mojave Trio (Sara Parkins, violin; Maggie Parkins, cello; and Genevieve Feiwen Lee, piano) performing Jennifer Higdon’s Pale Yellow (2003). As bright and sweet as a spring day with blooming flowers and bouncing bunnies, the piece’s cloying tonality would fit perfectly on a Hallmark card.

After Higdon and Silliman, the complexities of Nico Muhly’s Common Ground, were greatly appreciated. The Mojave Trio infused the work with a dynamic sense of contrast, attack, and nuance. Chords expanded and contracted; the violin and cello traded agitated lines, with the piano providing a unifying matrix and, in the final section, a piano bass line around which the string harmonies shifted.

Clearly the Mojave Trio devoted a great deal of time preparing their performance of Kaija Saariaho’s 2014 piano trio, Light and Matter. They attacked the work with bravado as well as sensitivity for its complex, variegated textures.

Inspired by the view from her New York apartment — of glittering light on fluttering leaves — the piece abounds in rich variations of texture, rhythm, and instrumental voicing, including gossamer background glissandos strummed on the piano strings. Light and Matter represents Saariaho at the height of her compositional power.

Thomas Kotcheff is a composer to watch out for. A local L.A. talent by way of Yale and USC, his piece for five cellos, Go in in in in & in began almost exactly like the two cello pieces that had come before. Then the piece blew them out of the water with its wonderfully quirky, modulating slurs from dissonance to full-voiced chromatic chords, while paying homage to John Adams’ Shaker Loops in the way Kotcheff employs propulsive, locomotive rhythms. It ended the concert on a high note.

Upcoming Tuesdays at Monk Space are scheduled for Feb. 20 (Aperture Duo and composer Colin Horrocks); March 20 (Hocket and West/Gerpe); April 17 (wild Up with Claire Chenette); May 1 (composers on the Cold Blue Music label); and June 5 (gnarwhallaby). For information: www.tuesdaysatmonkspace.org.

Kaija Saariaho is being given a great composer’s retrospective this month, and her music more than justifies the celebration.