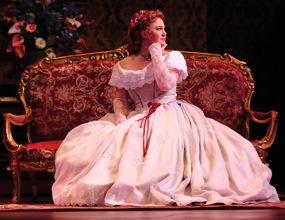 Are opera lovers reevaluating La Rondine? Puccini’s 1917 lyric comedy has always been dismissed as something of a trifle, a one-hit wonder with a single great soprano aria (“Chi il bel sogno di Doretta,” or “Doretta’s Waltz”) and not much else to recommend it.

From time to time, though, a production comes along that asks audiences to consider the work anew. Opera San José’s marvelous new staging of La Rondine (The swallow), which continues at the California Theatre, is that kind of production.

Saturday’s opening performance, which repeats with two alternating casts through May 9 as the final offering of the company’s 26th season, makes you wonder why the opera has never enjoyed a wider following. (In the Bay Area, San Francisco Opera has presented it twice — once in 1934, and again in 2007, as a vehicle for soprano Angela Gheorghiu.) Yet, when all of the elements work, as they do here, La Rondine casts an alluring spell.

With Music Director David Rohrbaugh leading a flowing, luxuriant performance of the lilting score, José Maria Condemi’s apt staging illuminated the bittersweet love story, set in 19th-century France, of the “swallow” who longs to fly free. A terrific cast, from principal to subsidiary roles, did the rest.

In La Rondine, Puccini (with librettist Giuseppe Adami) tipped his hat to the Viennese operetta style, infusing the story of Magda de Civry, the Parisian mistress of a wealthy tycoon, with the lighthearted melodies and giddy waltz rhythms made popular by Franz Lehar and Johann Strauss.

There’s a bit of Bohème in the opera, and perhaps some Madama Butterfly, too. Unlike those works, though, the story never turns tragic. When Magda falls in love with the handsome Ruggero, she knows the respectable life he offers is forever beyond her reach; by the end, when Magda returns to her life as a courtesan, everyone is older, sadder, and wiser — but still standing.

All’s Well in Staging and Design

Condemi’s traditional staging kept the opera in the 19th century, striking just the right tone throughout its three acts, and his design team delivered a unified vision in every particular. Larry Hancock’s sets featured a well-appointed parlor in Act 1 and teal-colored, floor-to-ceiling leaded windows as a backdrop for the Act 2 scene in Bullier’s ballroom. Act 3 suggested Nice, with a lovely seaside cottage overlooking a wide expanse of blue sky. Kent Dorsey’s lighting and Elizabeth Poindexter’s costumes enhanced every scene.

Magda (sung by Rebecca Davis) made her first entrance looking pampered and pretty, very much the “kept” woman in the house of Rambaldo. She disguised herself in homespun for Act 2; Ruggero, the innocent small-town hero, was suitably enchanted, completely taken in by her good-girl image.

Davis (who will yield the role to Jasmina Halimic on May 1, 7, and 9) made a beguiling Magda — not only in Act 1’s “Chi il bel sogno,” which she sang with warmth, assurance, and pure, bright tone. The soprano continued to build on that first aria throughout the evening, creating a complex character torn by her desire for love and security. Her vocalism throughout was an enchanting blend of steely strength and passionate yearning.

Christopher Bengochea was quite as impressive as Ruggero. The tenor boasts sturdy, beautifully colored Italianate sound, and he made his Act 3 awakening to Magda’s duplicity a moment of genuine pathos. (Alexander Boyer will assume the role in alternate performances.)

Aside from the central couple, La Rondine contains a great deal of humor, brought to vibrant life by the elegant Michael Dailey as the poet Prunier and the agile Khori Dastoor as Lisette, the sassy maid in Magda’s employ. Condemi’s direction yielded several episodes of genuine hilarity, bringing out a dimension in these two characters that is often ignored in productions of the opera.

In the supporting roles, Krassen Karagiozov’s Rambaldo, Melody King’s Yvette, Alicia Lynch’s Bianca, and Tori Grayum’s Suzy all made fine contributions. The chorus sang attractively, though the staging in the Bullier’s scene suggested they had yet to receive specific movement direction.

Rohrbaugh conducted a beautifully shaped, effusive performance of the score, eliciting rich textures from each section and supporting the singers with tremendous sensitivity.

As the cast, conductor, director, and designers took their bows at the end of the two-and-a-half hour performance, a bouquet of roses was presented to wig and makeup designer Sara Beukers, who is leaving Opera San José after 16 seasons. For the others, a standing ovation and prolonged cheers had to suffice. This was a splendid revival, one that went a long way to reinvigorating a much-neglected work.