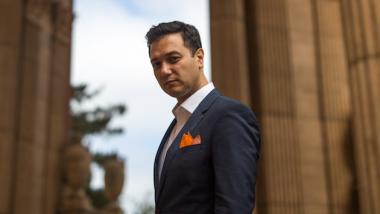 Tenor Nicholas Phan appropriated the title of a Gabriel Fauré cycle, La bonne chanson, to title his April 12 San Francisco Performances recital of French Belle Époque songs at the Herbst Theatre. It was more than a convenient way to label this evening of “good song.”

In setting a series of Paul Verlaine poems about a turbulent love affair, Fauré tapped his own passion for a soprano, Emma Bardac, who would later marry Claude Debussy, himself represented on this program by his Ariettes oubliées (Forgotten songs). The two composers, who may never have actually met, were inextricably linked by love.

That’s not to suggest this fine, all-French program was a plunge into the abyss. Whether in the jaunty “Gallant Parties” of the salon composer Reynaldo Hahn, a fleet account of Lili Boulanger’s “Two Columbines” or the droll curiosities of Erik Satie’s Ludions (Bottle imps) Phan and his sensitive accompanist Myra Huang found plenty of ways to vary the musical temperature in the room.

More importantly, it was Phan’s interpretive authority and finesse that gave the evening its shaded colors, nuance, and overall dramatic presence. Again and again he delivered a sense of present-tense musical meaning to the lines.

It happened early on, in a trio of Hahn’s songs. No sooner had he given the Mozartean poise of “To Chloris” a composed elegance than his voice took on a loopy comic lilt in the subsequent “Parties.”

In the Debussy cycle, the peak achievement of the evening, Phan displayed both his range and attention to detail to especially gratifying effect. In “Wooden Horses,” he and Huang, took on its high-spirited rhythms and repeated lines as a kind of patter song, only to open out into a wistful, near-Proustian remembrance of childhood past at the end. “It is ecstasy” took on a languorous lushness in the singer’s amber tone and intimate, confiding phrases.

Sometimes a single line got a dense, emotional reading, as in the rise and fall of emphasis he brought to the lamenting doves in Debussy’s “The Shadow of the Trees in the Misty River.” His voice went hauntingly pallid at the end: “Your hopes that are drowned.” Over a gently percolating piano backdrop, the singer found a wondering puzzlement in the speaker’s search for grief’s reason in “There Is Weeping in My Heart.” The peine (pain) in that song’s final line was stretched into a two-syllable anguish.

Phan, a San Francisco Performances Vocal Artist-in-Residence, had a serene but focused bearing onstage. His gestures were minimal on Thursday. His gaze often conveyed a sense of distant, keenly remembered things.

His voice, dense and complex at the lower end, pleased without being conventionally pretty. High notes came at times with a vaulting effort that felt like genuine, agitated discourse. Through 31 songs, his command of the lyrics and diction never faltered.

At times, in the overlong selection of eight songs from Boulanger’s Clairières dans le ciel (Clearings in the sky), Phan seemed to oversell the material. “She has gone down” bordered on preciousness. “At the Foot of My Bed” — in which a supplicant’s devotion to a Black Virgin induces a fervid thought about a thousand crustaceans — was perhaps unavoidably oversold. If those early numbers suggested that Boulanger might have been included for reasons of gender representation, the later numbers proved otherwise. “I Keep a Medal” made an intense, heart-rending impact. The lengthy “Tomorrow It Will Be a Year” became a moving mediation on a beloved’s death.

Huang was an ideal partner, by turns self-effacing and assertive and always responsive to both the singer and the song. She was perhaps most impressive in her modest moments, like the invitingly unassuming opening to Fauré’s “A Saint Within Her Halo” or the gently arpeggiated light of the subsequent “Since Day is Breaking.”

Phan told the audience how grateful he was for his artist-in-residence duties. The feeling from the audience was mutual. For this admirable program of both the known and the less familiar figures of the Belle Époque, he and Huang received a deserved shower of applause and huzzahs from the crowd.