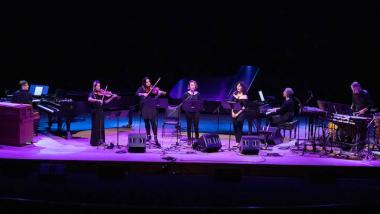 Nico Muhly and an A-list crew of contemporary classical musicians played to an enthusiastic crowd Friday night at the Theatre at Ace Hotel in “Archives, Friends, Patterns.” The program featured works by Philip Glass as well as Muhly’s original work and collaborations with singer Thomas Bartlett (aka Doveman).

The concert was built around the concept of community. As Muhly told the audience, much of Glass’s early music was conceived for musician friends and tonight was Muhly’s own chance to perform music with his community. He mentioned that, in several cases, he had known members of the evening’s ensemble since he was 18. “We’re not 18 anymore, but that’s totally OK,” he added.

The first half of the program featured a wide range of Glass’s work, rearranged by Muhly for the evening’s ensemble. Sopp and Shaw alternated on vocals and instruments throughout much of the set. Shaw gave a commanding performance when the ensemble performed a section of Another Look at Harmony. Her breath capacity was expansive and athletic.

A highlight was music from the ending of Glass’s 1984 film, Mishima: A Life in Four Chapters. Glass is at his most recognizable in this piece that felt fresh and vibrant on this program.

Another work of Glass’s, however, did not resonate as well. His suite from the film Étoile Polaire tended to feel long-winded at times. Glass can sound like a parody of himself and that was the case here. The near repetition of the same bars for several minutes fell flat.

In a surprise appearance, Portman was called up from the audience to narrate Glass’s CIVIL warS, from the composer’s collaboration with theater director Robert Wilson. Her narration, often manic on lines like, “How come I have bruises,” was particularly poignant against the ensemble’s strong string playing.

Muhly and Bartlett premiered a song cycle they co-wrote, based on the Gamelan-inspired music of Benjamin Britten and Colin McPhee. Bartlett’s breathy, whispery vocals were nicely etched over the sound of two pianos. Muhly and Bartlett, each on a grand piano, sat back to back. Each would occasionally take a hand off of his own piano and perform on the other’s instrument.

Muhly chose to end the evening with two of his drone-based pieces, in which the ensemble drew out a single note while soloists played aggressive rhythmic lines over them. The first piece featured Sirota, the violist, as soloist. Her agile playing, deep into the string, cut a clear sonic figure over the droning flute and cello beneath. The soloist on the second piece was the immensely capable violinist Lisa Liu. Her playing was sharp and in clear contrast to the smooth drone line below. Muhly intoned chords on the piano, bordering on the atonal at moments.

These two pieces were Muhly’s best of the night. While Muhly is known foremost as a composer, his piano abilities were on particular display. He plays a tactical and percussive piano, while still retaining clarity. It lends itself well to his intricate and bombastic compositions.

The evening was a sure success for Muhly. His varied choice of programming still retained the common thread of Glass’s influence. It made for a convincing narrative and the audience was enthusiastic. The level of playing was consistently strong.

From Philip Glass to Caroline Shaw, Muhly calls on a host of longtime collaborators for his upcoming show at The Theatre at Ace Hotel.