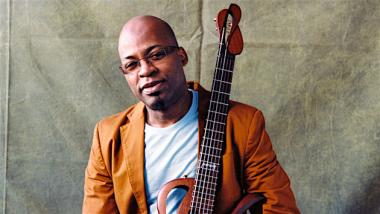 For jazz fans, Lionel Loueke has been particularly hard to miss this year. In early March the guitarist provided a shape-shifting muse for Herbie Hancock at Oakland’s Fox Theater, instigating one surprising twist after another within the band’s bravura mélange of jazz, funk, and West African rhythms. A few weeks later, he was the sonic wild card in bassist Dave Holland’s all-star quartet Aziza at the SFJAZZ Center, laying down a polyrhythmic lattice that elevated both drummer Eric Harland’s churning trap work and Chris Potter’s inexorably logical tenor sax lines.

Whether he’s playing with his peers or jazz’s most distinguished improvisers, Loueke (whose name is pronounced Lee-o-nel Lou-ay-kay) is an ideal collaborator. He comes to the bandstand with a surfeit of ideas and a seemingly bottomless well of sounds and textures as a guitarist and vocalist who can lay down a popping rhythmic line with mouth percussion or croon in a delicate, soaring falsetto.

He’s an ideal collaborator but, leading his own trio Loueke is a force of nature. He played a rare Bay Area date on April 17 at Yoshi’s with his longtime confederates, Hungarian drummer Ferenc Nemeth and Swedish/Italian Massimo Biolcati on six-string electric bass and double bass, and the 80-minute performance moved in so many directions it could have previewed a week-long residency.

The triumvirate has been playing together since meeting at Berklee nearly two decades ago, after which they became the first ensemble to earn a spot in the prestigious graduate program at the Thelonious Monk Institute. At that point the group performed and recorded as the collective trio Gilfema, but after Loueke was recruited by Hancock and trumpeter Terence Blanchard, both Monk faculty members, he took on bandleading responsibilities.

Born in the small West African nation of Benin, Loueke followed a similar path as fellow countrywoman Angelique Kidjo, moving first to Paris, where he immersed himself in jazz, and then to the U.S. His music often draws on Beninese rhythms and at Yoshi’s he played several pieces that drew directly on traditional forms, with his guitar evoking the twang of a kora. The trio plays together with breathtaking agility, though the interplay was at its most intense when one of the players sat out and Loueke traded phrases with Nemeth or Biolcati in a loose and limber duo.

If there’s a drawback to Loueke as a solo artist, it’s that there’s nothing to rein in his imagination. That’s not necessarily a problem. He possesses at least four fully developed guitar vocabularies, and he often moves between them within a piece. There’s the sweet, light-gurage tone reminiscent of Malian masters like Djelimady Tounkara, and a lean, clean, straight-ahead sound that registers between Pat Martino and Grant Green. He also employs a thick, keyboard-like tone that brings to mind Chick Corea in his Elektric Band mode. If one facet wore out its welcome, you didn’t have to wait long for him to move in a different direction.

Loueke’s headlining performance wasn’t the only rarity at Yoshi’s on Tuesday. In a move rarely seen these days, he invited the Huntertones to open the show, and the New York brass ensemble started the evening in a pleasingly raucous mood. The sextet plays a dynamically volatile mix of jazz, funk, and New Orleans party music, delivered with an air of studious playfulness. In the middle of the group’s brief set they slimmed down to a trio featuring Dan White on tenor sax, Jon Lampley on trumpet and sousaphone, and Chris Ott on some impressively agile beatboxing to deliver an infectuously grooving medley encompassing hits by the Jackson Five (“Give Me One More Chance”) and Michael Jackson (“The Way You Make Me Feel” and “Billie Jean”).

A beautifully lapidary sextet arrangement of Brian Wilson’s “God Only Knows” was another high point. The Huntertones ended the set with a buoyant West African dance piece “Togo” joined by Loueke. The three Huntertones horn players came back out to join Loueke’s trio on the closing number “Freedom Dance” (not to be confused with Eddie Harris’s classic “Freedom Jazz Dance”). With Loueke’s vocals processed to sound like a three-man chorus, the 6/8 tune turned into an extended series of call-and-response phrases with the horns. Loueke knows how to send an audience home happy.

Featured prominently on the new Chick Corea–Steve Gadd Band album Chinese Butterfly (Stretch Music), he’ll likely be back in town before long in his familiar role as a sideman. But he’s got a new album due out in the fall on the French label Aparté Records, an ambitious project featuring his original songs arranged for reeds, strings, and percussion. One thing is for sure: The project won’t lack for ideas.

Omar Sosa in the Flow With Transparent Water

The commanding pianist is paring things down at Yoshi’s, with a trio that includes Senegalese kora player Seckou Keita and Venezuelan percussionist Gustavo Ovalles.