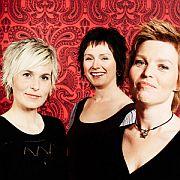 Chelsea Nicole Spangler on November 18, 2008
I walked into Herbst Theatre on Sunday evening expecting the Scandinavian ensemble Trio Mediæval to instantly transport me from sunny San Francisco to twilit Norway, where winter has already begun. I was mystified by the collection of what appeared to be found objects onstage — these were not instruments I had ever seen in Norway. As soon as percussionist Terje Isungset began to play, however, it became clear that these really were Norwegian instruments. A small plastic tube was made to sound like a seljefløyte, a traditional willow flute. A collection of wooden sticks rattled together, reproducing the sound of a waterfall making its way down a mountainside and into the fjord. The wind was conjured by Isungset blowing into a small microphone. The tinkling of small bells added the image of goats in their mountain pastures. But where were the shepherdesses? One by one, vocalists Anna Maria Friman, Linn Andrea Fugleseth, and Torunn Østrem Ossum entered the stage singing a trall — a style of folk singing in which the “text” is actually a series of syllables that imitate the sound of a fiddle. It seemed unnatural not to get up and dance, until the four musicians shifted into a subdued ballad. This sort of seamless transition from high-energy dance tunes to entrancing, lyrical melodies characterized the entire concert. Usually at least three songs were performed before the audience was allowed to applaud. It was as though Trio Mediæval was enjoying itself too much to stop — and we didn’t want it to.

The women of Trio Mediæval have been singing together since 1997, but last year was the first time they performed an entire program of folk music. All three are trained primarily in Western classical vocal styles, and the ensemble’s first three albums include English and French music from the 13th to 15th centuries. Many of the folk songs performed on this concert presented by San Francisco Performances (as well as on their newest album) are from roughly the same period. The vocal styles used in medieval European music and traditional Norwegian folk singing are fairly similar, apart from the types of ornaments that are employed. Trio Mediæval played up this similarity, using harmonies to take listeners to a different sonic universe when they least expected it. One verse sounded as though we were firmly rooted in Norwegian soil; but then a well-placed cadence could transplant us into a 13th-century French cathedral before we even noticed that we’d moved. This interplay between medieval folk music and medieval church music came across brilliantly during the encore. Here the trio sang a setting of Salve mater misericordie (Hail, mother of mercy), and it was evident that church music is their real area of expertise. During the final cadence, the three gorgeously blended voices were joined by the sound of Isungset’s jaw harp from offstage. As he came out to join them, the ensemble launched into one last rollicking trall. Whether or not music is a universal language, Norwegian certainly isn’t. Still, Trio Mediæval undeniably managed to communicate with the audience throughout the performance. Much of a folk song’s appeal lies in its storytelling element, so when the text is not understood, music must take on the role of storyteller. A sense of expectation was created by driving rhythms and tight harmonies in Det lisle bånet. In So ro, godt barn, a lullaby, a lilting ostinato simulates a cradle's rocking. Rolandskvadet, a Norwegian take on The Song of Roland, employs war drums, while rhythmic vocals simulate the coming of the cavalry. A bridal march (Bruremarsj frå Gudbrandsdalen) sounds positively joyful, even triumphant. I thoroughly enjoyed Trio Mediæval's grand tour of southern Norway throughout history, with bonus side trips to medieval England and France. The emotional spectrum it explored by way of vehicles ranging from lively dance tunes to haunting psalm melodies made me hesitant to come back — and I’m already looking forward to the next trip.