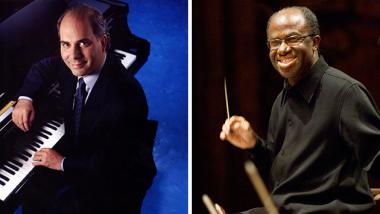 Michael Morgan must have had two major conflicts on his mind in the days leading up to this past Friday night’s concert. He had chosen to perform a work that would test the mettle of his Oakland East Bay Symphony to the extreme. Would his players fight hard enough to get the notes right? And his audience would be plopped in the trenches of a 66-minute, mid-20th-century shock-and-dirge fest. Would they run for the exits, or worse, hold Friday night’s onslaught against him when donation times rolled around?

Morgan surmounted both challenges, winning his first battle by inspired preparation and rehearsal. I have never heard the orchestra play to such perfection. He conquered his second with canny programming and a stroke-of-genius, audience-mindset-molding address to the crowd from the conductor’s podium. Nobody walked; the ovation was enormous.

The Eighth Symphony of Shostakovich is not for the faint of heart. It features long solos (one, for English horn, is four minutes); extended passages for strings on very high notes, during which the slightest asynchrony or off-intonation sticks out like a sore thumb; and technical difficulties not dissimilar to free-climbing El Capitan. Shostakovich wrote it in a converted henhouse the summer after the battle of Stalingrad and declared upon its completion, “There is a certain vacuum in my soul.” Referring to a benedictive C-major chord in the last two minutes rather than the tragedies of the preceding 64, he later wrote, with stupendous irony, that the symphony philosophically declares, “Life is beautiful.”

Morgan pressed all the right performance buttons. Tempos were right on, never lagging or too chaotic. The dynamic range was explored where it should be — at the extremes: The climaxes, with their vast battery of drums, were electrifying; the pianississimos were breaths over the grave. Of all the pleasures of his orchestra’s rendition, the most complete was the transition between the explosion ending the third movement march and the decrescendo into the exposition of the fourth movement’s post-apocalyptic passacaglia. Too often, the decrease in volume is taken too quickly: It is far more effective to do so only nearer the end of the first statement of the passacaglia theme, one of the most forlorn in the repertoire.

Morgan pressed all the right performance buttons. Tempos were right on … The climaxes, with their vast battery of drums, were electrifying; the pianississimos were breaths over the grave.

I have never heard a better audience setup than Morgan's remarks to begin the second half of the program. The first half was the upbeat, Gershwin’s Concerto in F, wonderfully performed by both the orchestra and soloist Richard Glazier. Listening to the timeless music, written in 1925, I could not help thinking of the optimistic atmosphere of that period, when war had ended and the nation was bubbling with enthusiasm for the future.

“I hope you enjoyed the Gershwin.” Morgan began. Loud assurances from the crowd. “That is over now!” he continued, to nervous laughter. He then put the Shostakovich in context, describing it as a “warscape” full of “terrifying cries,” with sounds “suspiciously like dive bombers” capturing the ethos of a people who had already suffered millions of dead in a war that “If you lost, you get Hitler; if you win, you get Stalin.” He concluded by asking for understanding of a work that is “a perfect depiction of its time,” and for accepting the final two minutes with its “beautiful modulation to C Major” as a “rainbow” of a “return [at last] to normalcy.”

Most of the audience members seem to have taken his words to heart. There was little of the usual nervous coughing and restlessness that can accompany works that for some can be difficult to endure. The ovation at the conclusion was loud and prolonged.

Even more gratifying was Morgan’s extended tribute to the orchestra players, walking up personally to almost every member and congratulating them. Meanwhile, even more enthusiastically than the audience, the players were deservedly congratulating themselves — and Morgan — with applause and smiles as wide as the Russian steppes.