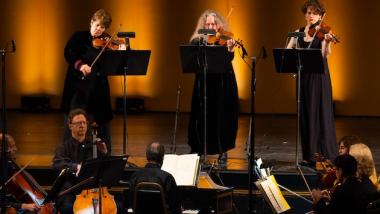 Oakland Symphony Brings the Violins of Hope to Mahler’s Fourth

No wonder the Third Reich hated Gustav Mahler: Passionate, eccentric, earthy, and yearning at the same time, his music flies in the face of the fake Nazi certainty about forcibly creating an ordered, “perfect” Aryan supremacy. Mahler’s Fourth Symphony — performed by Michael Morgan and the Oakland Symphony on Saturday — repeatedly thumbs its nose at the grand pretensions of German Romanticism, those mythic stories of heroes and apocalypse that Wagner codified for the aesthetes of the SS. How it must have annoyed the “upright” henchmen of Hitler to hear Mahler write long, lush melodies only to break them off with sudden, bitter interjections and wailing passages of raspy, brassy scorn.

And indeed, the Nazis did ban Mahler’s music. It was a no-brainer from their perspective: if it weren’t enough that the composer was Jewish, anyone listening to Mahler’s music could perceive its affinity with Sigmund Freud, Mahler’s fellow Jew and Viennese intellectual — each of them delving into the dark, irrational imaginations of the human mind.

Censorship, of course, was not enough. Into the concentration camps went those who had made Mahler and Freud possible: Jewish and otherwise marginalized musicians, patrons, intellectuals, doctors, artists, homosexuals. We cannot perform or listen to Mahler — and so many other composers — without acknowledging that pandemic of rampant anti-Semitism and violence against art and thought.

The Violins of Hope project — partnering with Oakland Symphony in this concert — makes Holocaust remembrance tangible and audible. On Saturday, Feb. 22, in one of a number of related Bay Area programs, instruments that had been abandoned or lost or near-destroyed in the forced removals to the camps, lovingly restored by Israeli luthiers in recent years, resounded again in the hands of Oakland Symphony musicians, playing in acknowledgement of the tragedy and the hope to do better in the future.

One of the countless ironies of the history of the Holocaust is that the same music at which early 20th-century Germany and Austria excelled had a grisly place in the camps, in the form of prisoners’ orchestras; one of these was led by Mahler’s niece, violinist Alma Maria Rosé, who died at Auschwitz-Birkenau. If this ghastly job — playing for daily marches to forced labor or execution — played Mahler’s music, it would have to have been clandestinely (and sketchily, given the impossibility of assembling the forces for a Mahler symphony). Yet here were those same violins, now proudly and openly bringing this great art to the Paramount Theater, to a packed and enthusiastic audience.

Oakland’s rendition of Mahler’s Fourth painted the large shape of the symphony at some expense to the nuances. There was the long sweep of the wonderfully contrasting movements (the lush first movement, the sassy and weird Scherzo, the elegiac theme and variations movement, and the heavenly visions of the finale). The woodwind soloists sounded clear and confident, especially the clarinets and bassoons, and the horn section — after some initial rough spots — came through with flying colors. Concertmaster Dawn Harms masterfully juggled two instruments (one tuned normally, the other up a step, as Mahler indicates) in Mahler’s eccentric “dance of death” in the second movement. Soprano soloist Elena Galván brought a charmingly clear and happy sound to the last movement’s evocation of a child’s vision of heaven. While Morgan’s conducting was clear and straightforward, I longed for more give-and-take in the tempos (Mahler is forcefully explicit about this in the score) and more flexibility in shaping Mahler’s long musical phrases.

Three of the Violins of Hope were featured in the program’s opening piece, Vivaldi’s sunny Concerto in F for Three Violins, played exuberantly by the symphony’s lead violinists (Dawn Harms, Terrie Baune, and Liana Bérubé), with Morgan conducting from the harpsichord. Unfortunately, the soloists were positioned behind and above the rest of the orchestra, so their sound lacked the brilliance that it might have had. The unsophisticated amplification of the Paramount Theater did not help, flattening out and repositioning the sound into vast banks of speakers on either side of the stage. The soloists appropriately held their violins aloft at the end of the concerto in acknowledgement of these historic instruments’ roles in bringing Vivaldi to life in this act of remembrance.

The Vivaldi concerto was followed by Steve Martland’s minimalist Crossing the Border, written in 1990–1991. The strings played from the pit while 10 dancers from the Oakland Ballet Company occupied the stage. The music, though robust and rhythmical at times, was highly repetitious, demanding a great deal from the string players without giving much back in the way of meaning or affect, and the choreography seemed uncertain about whether it should be narratively programmatic or abstract. It was a strange piece to add to the Violins of Hope project, lasting far too long, especially given the demands (on orchestra and listeners alike) of the hour-long Mahler symphony that awaited after intermission.

A table in the lobby with several Violins of Hope and docents from the project drew many interested audience members to cluster around for a chance to connect close up with these historic and almost talismanic instruments.

In Des Knaben Wunderhorn, the collection of German folk poems that fascinated Mahler, the children’s poem from which Mahler drew the text for the Fourth Symphony was called “Der Himmel hängt voll Geigen” — literally, “the heavens are hung with fiddles.” Surely, too, these Violins of Hope (and the thousands more destroyed in the Holocaust) hang in some heaven of the musical imagination.

A Jake Heggie premiere highlights residencies at Kohl Mansion and the Soraya.