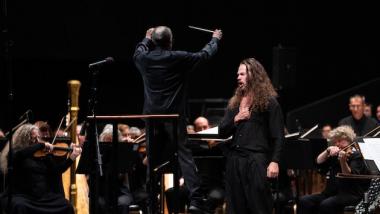 In the ecology of Bay Area orchestras, the Oakland Symphony provides nearly unique value to its city. Sure, it supports a youth orchestra, like many of its compatriots, and it has a school outreach program (connecting with about 1300 schoolchildren each year), but that’s just the beginning.

In fact, in order to make sense of the seemingly oddball “Hot as Hell / Cool Jazz” season opener on Friday night at the Paramount Theatre, which paired Arrigo Boito’s Prologue to Mefistofele with a jazz set supported by the orchestra, you have to know something about the personnel.

The extra, backstage brass for Mefistofele was provided by members of the Oakland Symphony Youth Orchestra, the Oakland Symphony Chorus (an auditioned community choir directed by Lynne Morrow) participated, the Piedmont-East Bay Children’s Choir sang the part of the Cherubim, and the soloist, Cody Quattlebaum, was the 2016 winner of the James Toland Vocal Arts Competition, which has been supported by the Oakland Symphony and its music director, Michael Morgan, from the beginning.

Now, while Mefistofele, based on Johann Wolfgang von Goethe’s Faust, is catnip to directors and opera companies looking to make a splash, it’s a flawed opera: static, episodic, and with a main character who, in musical interest, basically shoulders every other character aside. Boito, whose talent as a writer/librettist was immense, badly needed a collaborator.

And yet, the opera has power. Boito was one of the first wave of Italian Wagnerians, and the smoothly worked but far-reaching harmonic changes and modulations and the inventive, active use of the orchestra were certainly not business as usual for Italian opera in 1875. The Prologue, which comes across like a cantata, is perfect to get the flavor of the piece.

Morgan led a well-characterized performance with just the right mix of grandeur, comedy, and vigor. Most productions of this score utilize larger choral forces and, certainly on the concert stage, a larger string section, which may be why the string sound was astringent rather than plush in the crescendos. Quattlebaum, now emerging as an international star, was spot on, and I’d like to see what he can do in the full role.

The evening then turned to jazz, and again, the reason can be found in the musicians onstage. Multi-instrumentalist/composer Josiah Woodson came out of the Oaktown Jazz Workshops before going on to Oberlin Conservatory, the New England Conservatory, and worldwide recognition. Despite a busy professional life, Woodson comes back (from his Parisian home) to play with OJW whenever he can, inspiring the next generation. The OJW Youth Performance Ensemble also took the stage for a preconcert set.

Suite Elemental is Woodson’s debut album, from which he took two movements (“Terre” and “Eau”) and arranged them for orchestra. They are expansive compositions that took well to the new setting. On “Terre,” Woodson played guitar in a laid-back way, adding licks and punctuation. “Eau,” as you might expect, starts with shimmery flutes but quickly becomes dominated by Woodson’s soaring lead trumpet (guitar on the original recording).

The most unusual thing about this part of the concert, from the perspective of a listener familiar with orchestras, was the easy way that the Oakland Symphony switched gears to jazz — the actual thing, not a composed classical simulacrum. Woodson’s “Eau” plunges into a heady triple-meter swing that the orchestra had no trouble with. All night, the jazz musicians were at ease, playing freely and not seeming constrained, and the orchestra was never caught unawares or flat-footed. The orchestra’s brass players, bunched all the way stage left rear, swung like they were born to do it. That in itself was pretty cool.

The evening’s final addition was jazz pianist Taylor Eigsti, no stranger to the Symphony, having written a few orchestral works by this point, a sideline he says was started in collaboration with this orchestra. He was also the soloist in Rhapsody in Blue last February with the orchestra. Performing works from his new album, Tree Falls, scheduled for January 2020 release, Eigsti showed several sides of his musical personality, from the chord-and-riff based “Plane Over Kansas” to the multiple moods of “Sparky.” Tree Falls is going to be a special album, judging from these parts of it. Joining Eigsti in the combo were bassist Zachary Ostroff and drummer Jason Lewis, whose variety of timbres and light touch were perfect for the orchestral setting.

Not many orchestras could do what Oakland Symphony under Michael Morgan has accomplished. But in its inclusiveness and its promotion of the city’s musical culture, it’s a model of what a local orchestra might aspire to.

The offbeat orchestra creates an intriguing evening of music with a patriotic tinge and a rare symphony from the 1840s.