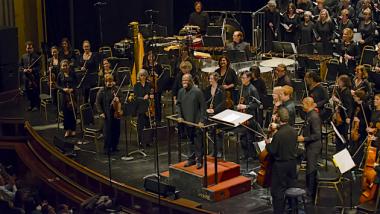 You don’t have to be political to appreciate how Michael Morgan has cultivated the idea that the Oakland Symphony is for everyone. On a Friday evening, with no Mozart or Beethoven pieces within hailing distance, the Paramount Theatre was filled with an audience that included a fair number of children (many of them students, toting instruments, from the Symphony’s successful MUSE Orchestra). There were many African-Americans and a broad swath of Oaklanders represented as audience and ushers and players onstage. It was a delight to see.

The concert we all assembled to hear, “I Raise Up My Voice,” had been rearranged, Morgan told us, in order to make room for Leonard Bernstein’s Songfest (1977), which occupied the second half. With the San Francisco Opera’s Adler Fellows making a strong impression, despite a few missing consonants here and there, the orchestra made a case for the expensive but underplayed piece. The first half, however, contained the discoveries that make a good concert worthwhile.

Morgan found the ideal concert opener for Bernstein’s piece (which was conceived to celebrate the nation’s bicentennial) in Jessie Montgomery’s Banner (2014), a piece commissioned to celebrate the bicentennial of our national anthem. Both pieces, Morgan commented, are examples of “real patriotism — not the ‘red hat’ kind.” By which I think he meant that both find strength in diversity, the musical spirit of “e pluribus unum.”

Montgomery is a graduate of the Sphinx Organization and then The Juilliard School of Music (M.M. in violin performance), and she was a founding member of the PUBLIQuartet and has performed with the Catalyst String Quartet. So the surprise that Banner is scored for string quartet and string orchestra is perhaps not so surprising after all — but it is welcome. Montgomery’s feat in this marvelous, nine-minute piece is to avoid most of the clichés that probably came to mind when you read the piece’s title. It’s not simple variations, it’s not a quodlibet piece, and there’s no blaring brass and wind.

Instead, Montgomery takes motives from the song and mines them over the course of the first third of the piece, overlapping them in a push that culminates in a unison “land of the free,” which then plunges forward and into a darker second section in which damped pizzicato and drumming on the body of the instruments evokes gunshots, cannons, the Civil War. But Montgomery sweeps past that into the final part, which develops from the previous staccato, martial rhythms into a merging river of polyphony that overlays bits of other songs and anthems (few of which I could recognize) on top of the “Banner” motives. It was a heady experience, well-performed by the orchestra. But I wish Morgan had separated the string quartet from the rest of the orchestra, so that the byplay of the two groups might have been more audible.

The other welcome discovery, for me, was Louise Farrenc’s Third Symphony in G Minor, a beautiful, ambitious 40-minute work written in 1847 by a 43-year-old professor of piano at the Paris Conservatoire. I had heard some of Farrenc’s finely wrought and imaginative chamber music but somehow missed this symphony, which not only received a premiere from the Conservatoire Orchestra in 1849 but was highly regarded in its day.

It’s easy to see why the piece has admirers. It’s a fully mature work, as up-to-date as any symphony from the late ’40s that you might find, fluid and well-orchestrated. Considering how many dour, high-minded detractors the symphonies of Mendelssohn and Schumann have, there doesn’t seem any reason to keep this work on the shelf any longer. It should get out more.

Theory heads will be drawn to some of the startling modulations by thirds and even semitones. But to me, Farrenc’s symphony is memorable because of striking melodies throughout the work and the rhythmic play, especially in the first movement, when syncopations and sudden cross accents create shifting metrical effects that energize the piece and power it through a furious coda.

Songfest is another work that could use more performances, though the requirement of six soloists and a large orchestra have probably deterred more than a few productions. It’s a broad look at American poetry, including the recently-turned-100 founder of City Lights Bookstore Lawrence Ferlinghetti, whose “The Pennycandystore Beyond the El” gets a typically Bernstein-ian jazz setting. Eclecticism aside, Bernstein’s score is a testament to his skills at setting text.

The “hit” song from this collection, “To What You Said,” was given a burnished, knowing reading by Christian Pursell. But Chris Oglesby’s wry take on “Zizi’s Lament” (by beat poet Gregory Corso) and Mary Evelyn Hangley’s “A Julia de Burgos” were also highlights. Natalie Image, Ashley Dixon, and SeokJong Baek were all excellent, and the orchestra did well.

Peace prevails in a program exploring “the artist’s struggle.”