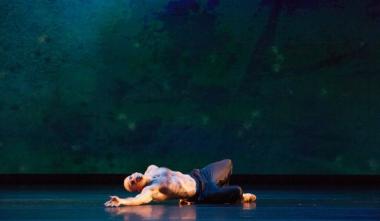 ODC's Birthday Guests: A Private, a Cat, a Painter

ODC’s Dance Downtown series at Yerba Buena Center for the Arts is part of a landmark 45th year celebration. In 1976, as the Oberlin Dance Collective, the company hauled itself in a yellow bus from the college in Ohio to San Francisco.

Longevity, as we’ve been sadly reminded with the recent collapse of Silicon Valley Ballet, isn’t easy for a dance company to come by. But some keys to survival might be gleaned from ODC’s opening night last Thursday, March 17. For one thing, three of the original members, Brenda Way, founder and artistic director; KT Nelson, co-artistic director, and Kimi Okada, associate choreographer, are still in place, still working, still keeping an eye on business, still pushing to keep their artistic vision alive and growing. That consistency, and that bootstrap/school bus back story, comports well with support of the dance community and audiences alike, even as ODC goes on national and international tours, and works with well-known artists and composers (Andy Goldsworthy, Paul Dresher, and Jean Jeanrenaud, for instance).

The opening night show consisted of three dances, one by each of the founding members. From KT Nelson, there was Going Solo, a world premiere, made for a dancer whose name, wonderfully, became Brandon “Private” Freeman after a hitch in the National Guard. He joined ODC in 1996 and left after 12 years to live in Colorado, make violins, and dance with the Colorado Ballet. He decided to come back, and the solo is his welcome-home present.

Arriving onstage in practice clothes, carrying a red water bottle, Freeman begins exploring his territory, slowly but comfortably, stretching and describing circles with his feet. Freeman looks like a dance everyman, with his buzzcut and nicely sculpted body, his lack of pretense. He’s inquisitive, slightly awkward, investigating physics and gravity like a dancer who hasn’t danced much in the last eight years. But when he hits an arabesque and just stands there, he looks gorgeously dancerly. Gathering confidence, he runs and leaps, backgrounded by the sound of cellos and burbling water. The recorded sound design and music are by cellist Jeanrenaud and Max Richter. The backdrop, which looks like a piece of beige patchwork, is by Sara Horner and David Robertson.

As his moves become bigger, Freeman uncorks the bottle, splashes the water on the floor, and begins sliding on it – shades of Pilobolus — across the length of the stage, on the feet, the belly, the back. It’s a lot of fun, even though the subsequent darkening indicates, perhaps, that nobody can predict his future happiness. Still, nice to have Freeman back in the swim of things, which may be the only verbal cliché the next dance doesn’t include.

Contexted as a language immersion class with role-playing students, Kimi Okada’s 2011 piece, I look vacantly at the Pacific … though regret depicts a peculiarly entertaining world of confusion, linguistically and kinesthetically. The puzzlement extends from the silly or sober costumes (by Maya Erickson and Liz Brent) to the antic moves, executed by the nine “students” who ramble, in various groupings, through poses and lifts, falls and kicks, leaps and handshakes and bows. The music is by Jay Cloidt and Shoukichi Kina. Additionally, there’s a background babel of language recordings, with imaginary business dialogues full of shopworn expressions and kind of a weird, blank bonhomie.

Brenda Way’s world premiere, Walk Back the Cat, a somewhat unfocused examination of her own, and by extension others’, creativity is set to a commissioned score by Paul Dresher, which he plays live with Tom Dambly and Emily Packard. The visuals, by R.J. Muna, are a fine platform for the full-company work, which looks – extremely indirectly, to these eyes – at how a dance has come to be – hence the title. Brenda Way sets herself no small task. How do artists describe how they work? Often, they can’t. But it’s an admirable attempt.

Figuring into her myriad influences is the artwork of Thomas Hart Benton. This occasions the supple, plush yet muscular dynamic, the fluidly interacting choreography that’s a hallmark of Way’s work. She points out that, like Benton, she’s always been interested in everyday movement, and this piece bears out her gifts in that arena. Gabriel Brandon-Hanson’s designs for the women’s dresses constitute a lush, variegated garden of ‘30s colors, lengths, and textures. They’re as wonderful as this company.