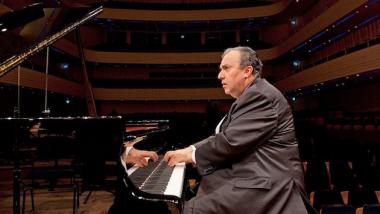 “My symphony is long and not particularly lovable.” So Brahms described his first symphony, a work that took him 14 years to write. Of course, these are the words of a composer who famously struggled with self-criticism, and particularly, the legacy of Beethoven — today, few would call Symphony No. 1 unlovable. But it can feel long. That’s why it was so gratifying to watch Michael Tilson Thomas lead the San Francisco Symphony in a directional performance of the work on June 23, on a program that also included the U.S. premiere of a new work by Jörg Widmann.

In the introduction to the first movement, for example, bloated tempos often obscure the melodic lines. But SFS’s performance was simultaneously expressive and brisk enough to create thematic coherence between the Adagio and Allegro tempos. In the finale, the chorale theme flowed graciously, yet the unison syncopations, traditionally played heavily, instead drove to the end of the movement, garnering considerable applause.

If Brahms felt inadequate as a symphonist, Jörg Widmann, on the other hand, seems entirely comfortable contending with masterworks of the past. He doesn’t shy away from making references to the canon, and his new orchestral work, written for pianist Yefim Bronfman, is titled Trauermarsch (Funeral march).

Widmann’s work takes after Mahler, with a central motif that’s nearly identical to that of the first movement of Mahler’s Ninth Symphony. Indeed, what’s interesting about Trauermarsch is the delicacy with which Widmann treads the line between quotation and pastiche, tribute and parody.

The piece opens simply, with a descending half-step motif played by the solo piano. Gradually, members of the orchestra come in, and Widmann’s coloristic writing is in full bloom: There are Mahlerian slides and muted brass fanfares, but also new ideas, like the throbbing false harmonics in the accompanying strings. An ideal soloist, Bronfman drew unlimited qualities of sound out of the piano: sheer power when necessary, but also delicacy and introspection.

And there were many demands made of Bronfman, because it’s variable, transitory music. Quietly undulating piano lines alternate with noisy percussion passages; vigorous rhythmic motifs die as quickly as they appear. Each in the barrage of ideas is compelling, yet there are almost too many of them, or they need to be edited in a different way. Widmann initially set out to write a four-movement work with a brief introductory funeral march, but “got more and more obsessed” with the march until he scrapped the four-movement structure. The result is a 25 minute-long funeral march, a difficult thing to write.

Yet the wealth of ideas also makes the time pass quickly, and Trauermarsch is, as a whole, an engaging work. Next season at SFS will be more (if not totally) adventurous, celebrating John Adams, Steve Reich, and Lou Harrison. Recently, though, many of the contemporary works featured have been relegated to the first eight minutes of the evening, so it was refreshing to hear even this long and imperfect funeral march programmed.

But the most charming composer of the program was one who never had to worry about Beethoven: C.P.E. Bach. At 11 minutes long, his Symphony in D Major (Wq 183/1) is a tiny gem, and he knew it: Concluding his description of the set to his publisher, he wrote, “Modesty forbids me to say more.”

Theatrics abound: In place of melodies, precariously syncopated motifs characterize the Allegro, which abruptly lands in the key of E-flat major for the second movement Largo, which follows without a break. Written by another composer, an elegantly dotted flute melody might simply be sweet, but here, the violins interject with buoyant pops of pizzicato, and the principal viola (Jonathan Vinocour) and cello (Peter Wyrick) strangely but beautifully double the melody. In the cheeky Presto, dramatic pauses — deliciously elongated on Thursday — set off disorienting excursions to the minor mode. SFS was right to savor these moments in the marvelous little work of which Bach was so proud.