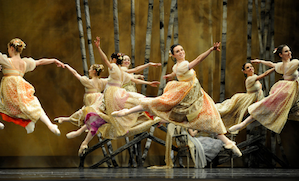 Onegin: Tour de Force in the Wages of Love

You have to wonder, regretfully, what other marvels John Cranko might have come up with if he had lived out a normal creative lifespan instead of suddenly dying on a plane in 1973 at age 45. His Onegin, which premiered in 1965, is just wonderful.

The evening-length extravaganza, back for just one week by popular demand at San Francisco Ballet, where it opened last season, is a prodigy of gorgeous dancing, stars to corps; it has a lean, clean yet utterly gripping storyline, and it is profoundly physical. Its three acts are almost devoid of mime, but in the passionate articulation of each step and phrase, the words are as clear as those scrawled on the scrims of Santo Loquasto’s fetching scenery, with its latticed gardens and imposing ballrooms. Clearer, even, unless you read Russian. Onegin is based on Eugene Onegin, Alexander Pushkin’s celebrated 1837 novel. There’s also an 1879 Tchaikovsky opera of the same name, but never mind; the music here is fragments of other Tchaikovsky works, arranged and orchestrated by Kurt-Heinz Stolze, beautifully played Thursday night by the ballet’s orchestra conducted by music director Martin West.

Maria Kochetkova and Vitor Luiz reprised their partnership of last year, leading the opening-night cast as the shy, bookish Tatiana and the supercilious, caddish Onegin. Clara Blanco was Tatiana’s coquettish sister, Olga, with Joan Boada as Lensky, her ardent swain and Onegin’s hapless friend and victim.

Lensky brings Onegin to a party, where he meets Tatiana, who falls hard for him. He sees her as a country mouse, and in the next act, at another party, he tears up her love letter to him, breaking her heart. Her sorrow merely peeves him, which lets you know what kind of a guy he is. He’s bored, so he makes a play for Olga. Lensky takes their flirtation seriously and challenges Onegin to a duel. Lensky loses and dies. Onegin, remorseful, flees. He disappears for years. He returns to find Tatiana happily wed to royalty. She has become, by dint of her unattainability, irresistible to Onegin. He visits her, tries to make love to her. She shows him a love letter she’s written to him. She tears it up and throws him out. Curtain.

So that’s the tale. As dance, it unwinds just as simply, but so compellingly. Luiz’ Onegin arrives at Madame Larina’s country home as a stalking, sulking city stud in black, to find Kochetkova’s Tatiana, a simple girl in white with a pigtail down her back, eyes downcast, her every gesture frail and tentative. She’s a wallflower, in contrast to Blanco’s vibrant Olga, who sweeps into every dance.

Olga draws Lensky to her side, supporting her in extravagantly deep arabesques and whirling promenades. He lifts and lowers her like a carousel pony. The corps de ballet, as party guests, cover the floor in gloriously speedy grand jetes and romp through Russian folk stylings. But Tatiana flutters shyly clear, running backward on point with tiny bourrees.

Luiz’ Onegin is a ruthlessly good dancer, with impeccable leaps and footwork. Clearly, he was sent by the devil. Tatiana doesn’t know what to do with her feelings. In her bedroom, she commits them to paper.

In the next act, Kochetkova flies into an amazing, passionate solo. She defies gravity, as Tatiana defies all modesty, launching herself in a series of enormous leaps and jumps across the floor, to the table where the sulking Onegin is seated. He rises, rebuffing her at the exact moment of her leap towards his arms, stopping her in midair and the audience dead (and making me hope to see Kochetkova as Giselle one day). Next, Onegin goes after sister Olga, first politely cutting in on his friend Lensky, and then not bothering. He just grabs for what he wants, clutching Olga’s wrist, arm, waist. Matters escalate to the challenge to a duel, with Lensky slapping Onegin with a glove. Onegin tries to talk him out of it. So do the sisters; they make a doomful sandwich, one sister clinging to the front of Lensky, another to his back, to try to stop him. But no.

We now have a chance to see how gorgeous Loquasto’s costume designs are; both men are in sweeping capes as they stalk across the forest, where snowflakes sparkle through the birches. A shot rings out and Lensky falls. Onegin stands, looking blank.

Act 3 take place years later, in Prince Gremin’s opulent ballroom. The costumes — gowns, formal wear — can’t be beat, especially Tatiana’s red ballgown with its gold stars. The corps looks marvelous as it moves through its mazurka-flavored steps, arms and heads angled just so. Cranko has set up a stunning yet simple frame — pinned down at the corners by liveried footmen in perukes — to display the love and trust between Tatiana and her husband, a prince charming if ever there was one (Pascal Molat). Their pas de deux speaks of deep affection in the warmth of their smiles, security of the holds, and hints of passion in the freedom of her legs in the lifts. So we think she may feel nothing for Onegin. Ha.

Onegin comes calling in her boudoir. Soon, they’re locked in a breathtaking struggle. We see sweeping, swirling lifts, over the shoulder, onto the back, down to the floor. The interplay is ceaseless, a tour de force. There’s a momentary break; she pulls away. He lunges for her, the way he grabbed at Olga. She seems to surrender. She takes out the letter she was writing when the scene began. She holds it toward him. But then she rips it up and flings the pieces at him. At last, he takes off. Tatiana stands alone with her memories. The love she felt for Onegin will always be unforgettable. But now she knows that he’s also unforgiveable.