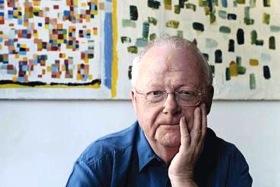 Only in San Francisco

The Other Minds Festival, dedicated to presenting and preserving open-ended approaches to new music, sprang forth over three nights last week, at the Jewish Community Center’s Kanbar Hall. For the 16th year, festival organizers brought together eclectic works by a number of world composers who believe strongly in structure, in chaos, and in tonality. They also gave over their stage to some composers who do not believe in those things, or who value audience participation, or love austerity and soundscapes, or adhere instead to principles of musical progression.

As an example, Thursday’s program included a piece by Louis Andriessen (from the Netherlands) called Le Voile du bonheur (The veil of happiness), for violinist and piano. It opened simply, with a rolling chord progression and a pretty melody. It was practically schmaltzy. But the violin melody was supposed to clearly come to a cadence, and was instead interrupted when the violinist grabbed a mic and began to belt out a pop song — a shocker. Then the singer, too, was supposed to come to a cadence, and instead returned to the violin’s pretty opening melody. This piece seemed to reflect the festival’s mission of presenting an assortment of deeply passionate music, plus a strong injection of the ridiculous or comic or just plain fun.

Polish composer Agata Zubel sang her own work, Parlando, written with computer effects. I say sang loosely, for she did everything vocally in this piece except really sing. She clacked her teeth, grunted out consonants, slowed down the vibrations of her throat to an eerie crawl, and popped up and down the entire vocal spectrum without hesitation. Somehow, though, the piece felt cohesive and ended exactly where it should. At moments, I thought this piece of serious music could have had comic effects if done differently, yet as a performer she convinced you of the sounds she made in the work.

Speaking of comedy, Fred Frith and Han Bennink’s free improvisation was more chaotic to witness than almost anything I’ve seen on stage. Frith sat with a guitar and a box of random goodies, from pieces of wire and string to a bag of beads and magnetic darts or something (difficult to tell). Meanwhile, Bennink, another Dutchman, had a snare drum with a bag of sticks that he threw carelessly around the stage. He played the drum, played the floor, sat on the drum and played the stool, threw the stool around the stage, walked off the stage and then walked back on. And he tied elastic to the snare drum and saw how far into the audience he could walk before the drum fell over, talked to the audience, played on a wheelchair in the audience and on the railing next to the audience, even dropped his drumsticks off the side of the audience bleachers. It was a riot of activity.

In contrast was Triskaidekaphonia I, by Kyle Gann, an American composer, teacher, critic, and holder of controversial opinions. This piece retuned an electric piano to showcase significantly smaller partials. I enjoyed watching his hands leap by fifths and octaves on the piano and hearing second-intervals emerge that colored the instrument in a beautiful and original manner. Even better, the piece lasted exactly as long as it should have: five minutes of fun.

Finally, I must mention a popular Balinese musician named I Wayan Balawan, who claims he doesn’t want to sound like other guitarists because, he says, “our background is so different. Why can’t I do my own thing? ... I can also represent my island and the Balinese people.” He played two tap guitars, one of them a double neck with an assortment of pedals and effect boxes at his feet. He was assisted by two Bay Area musicians, bassist Dylan Johnson and drummer Scott Amendola, as well as by a pair of musicians from Bali, I Nyoman Suwida and I Nyoman Suarsana, who dazzled at an assortment of traditional instruments, including a flute that was frequently in a different tuning system (a very Ligeti effect) and a double-headed drum that competed in a percussion duel.

The dynamic Balinese duo’s most stunning spectacle yet was playing side-by-side on a single gamelan at tremendous speeds. They alternated notes, together creating a melody that shot forth at a furious pace, creating a musically stunning and virtuosic show. Balawan appeared to be hosting a party on stage, and we were lucky to be able to witness it.

I’m happy to say that I never quite know what to expect from the Other Minds Festival. Every concert’s quality is all over the map. I have to hand it to festival Artistic Director Charles Amirkhanian, who each year pulls together events this wild and crazy. Only in San Francisco ...