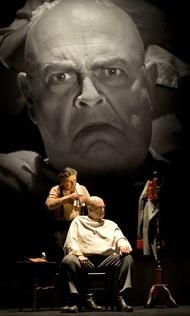 Ensemble Parallèle sold itself short by emphasizing that their two performances of Alban Berg’s nightmarish early-20th-century opera, Wozzeck, would fill the breach left since San Francisco Opera last performed the work in November, 1999. Heard and seen in the relative intimacy of Novellus Theater at Yerba Buena Center for the Arts, the West Coast premiere of John Rea’s 21-musician chamber reorchestration needed no apologia. Ensemble Parallèle’s oft-devastating, 90-minute multimedia wow of a production was whole and complete unto itself.

Conductor Nicole Paiement, who intends to mount annual productions of contemporary operas in San Francisco, and her stage director/husband Brian Staufenbiel paid equal attention to Wozzeck’s musical and theatrical elements. Ensemble Parallèle played as if on fire. Equaling their commitment was an outstanding cast of singer-actors, a number of whom have performed with San Francisco Opera and other major companies. Media artist Austin Forbord and set/lighting designer Matthew Antaky furthered unified the effort, creating a cumulative impact greater than the sum of its considerable parts.

The production wasted no time making its mark. Staged within a quasi-deco frame, the opera opened with Wozzeck (Bojan Knezevic), an oppressed militiaman and regimental servant of the Captain (John Duykers), shaving his master. As Duykers lectured and hectored his deeply troubled servant, an onstage video crew projected his every grimace and eyebrow raise in perfectly focused black and white on a screen behind the duo. The portrayal, mesmerizing in its obsessively lurid detail, emphasized the weight of Wozzeck’s burden in its larger-than-life proportions. That the video was fed through a computer program that projected it slightly out of synch further heightened the hallucinatory aspects of Berg’s score.

Ironically, Duykers’ tour de force underscored one of the few weaknesses of the production. Although Knezevic’s body language was true, his dramatic powers could not equal either Duykers’ or those of his other oppressor, the Doctor (Philip Skinner). Nor did his voice possess all the weight and cutting edge that his role demands. Unintentionally dwarfed by the great Duykers, whose weakening with age, pinched top nonetheless suited his cartoonish role to perfection, Knezevic’s portrayal lacked the eloquence that penetrates deep into the heart. Even extended prerecorded video of his aqua-demise could not evoke the sympathy that the role demands.

Seen on a significantly smaller stage than in the War Memorial Opera House, Skinner made an even stronger impression than he did as the towering, vengeful Bonze in San Francisco Opera’s Madama Butterfly. Intentionally rigid and mechanical in his movements, the Doctor displayed complete control over his “scientific” experiments on his deeply troubled guinea pig.

What a demented duo Skinner and Duykers made! Their meeting on the street, with the Doctor reciting all the afflictions that might strike the Captain, was a classic case of two nutcases giving lip service to rational discourse.

Light Amidst the Darkness

The sole notes of beauty in the opera came from Wozzeck’s lover and mother of their child, former prostitute Marie (Patricia Green). Although she betrayed both Wozzeck and her adorable innocent child (Kai Nau) by allowing herself to be seduced by the Drum Major (AJ Glueckert), her posture was so naturally regal, her voice so beautiful, and her entrapment so total that she touched the heart far more than Wozzeck. Although Green’s online resume describes her as a mezzo-soprano, the Canadian artist’s strong high C surpassed the screeches of many a bigger name Marie. Staufenbiel tastefully choreographed the fully dressed seduction scene to perfection.

Paiement did not skimp when casting other roles. J. Raymond Meyers was a solid Andres, Erin Neff a strong Margret; and John Bischoff (First Apprentice), Torleff Borsting (Second Apprentice), and Michael Desnoyers (Madman/Soldier) all shone when given opportunities to emerge. In the entire chorus of constantly inebriated soldiers and whores, only one young man looked like he didn’t know what to do with himself.

Several images and scenes continue to haunt the memory. One is the preposterously oversized black and white projection of the overstuffed Drum Major marching like a pea-brained peacock. Others are of the boy hopping along on his hobby-horse, and Marie admiring her earring-adorned self in the shard of a mirror. And the constantly shifting, faintly projected parallel lines in the background, symbolic of everything from the ensemble itself to the instability and lack of connection between characters, were something special.

Watching the Captain and Doctor remain in character as they took their bows was worth its weight in gold. And, of course, every shot of Duykers grimacing like an operatic Jack Nicholson was priceless.

At the risk of repeating myself, the orchestra, frenzied and eloquent, was outstanding. True, 21 players could not summon up the weight that the final act intermezzo/epilogue requires. Nonetheless, the transparency of line, which laid Berg’s scoring bare, had an eloquence of its own. Paiement’s achievement was staggering.